The US economy is about to break a record. Here's why 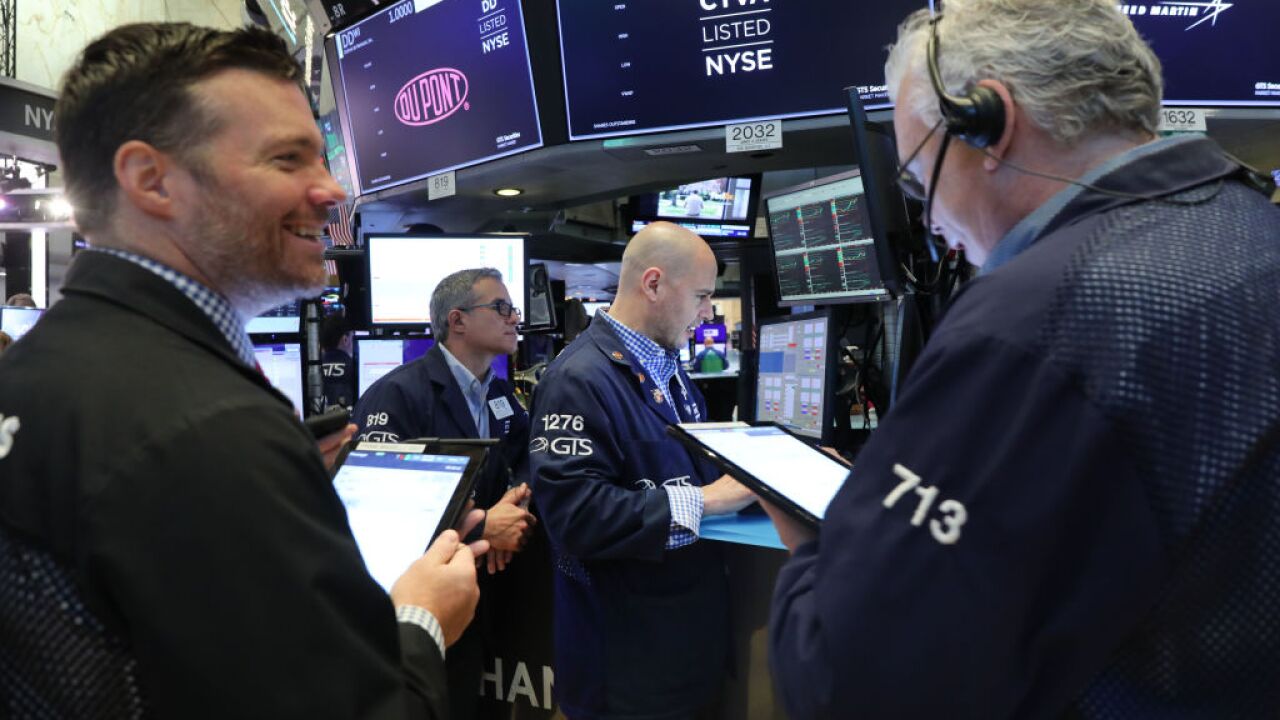 The US economy has been on the upswing for a very long time.

Even after factoring in Friday's weak jobs report , which showed a slowdown in hiring, US employers have added jobs for 104 months in a row.

Come July, the expansion will beat out the 1990s to become America's longest period of continuous growth on record. But unlike the 1990s boom — which included steady job creation, low inflation and a surging stock market — this latest expansion has been more like a prolonged, gradual crawl . It took years for America to emerge from its worst setback since the Great Depression.

The recovery has also been uneven. It started at different times in different parts of the country, lifting some people more than others. And now, questions are intensifying around just how close America is to the end of this business cycle, and what — if anything — could finally bring it to an end.

Let's take a look at the ten years since the economy bottomed out to see where things stand.

The share of Americans who want a job and can't find one, known as the unemployment rate, is one of the clearest indications that the US economy has returned to health. At 3.6% in May , the rate has been hovering near 50-year lows. Meanwhile, consumer sentiment has reached historic highs. CNN polls also show that 7 in 10 Americans think the US economy is in "good shape" or better.

Part of the reason that unemployment is so low is that employers have more open positions than they can easily find workers to fill them. The job openings rate, which measures job listings as a percentage of the total number employed, zoomed past the hiring rate in 2015. There have been more job openings than workers to fill them since early 2018, meaning that there's theoretically a job for everyone — if they're in the right places, with the right qualifications.

That doesn't mean that everyone has as much work as they want, however. A broader measure of underemployment , which also captures discouraged workers and those who want to work more hours, was slower to sink and still hasn't reached its lowest point on record, in 2000. Also, the labor force participation rate for people in their prime working years — which measures the share of the population who either have jobs or are looking for one — remains a full percentage point below its pre-recession high and two points below the all-time high in 1999.

The tightening labor market also took a long time to translate into higher wages, with average hourly earnings growth topping 3% in 2018, not counting inflation. Many employers have added non-wage benefits like better health care and help repaying student loans, but those total compensation costs still haven't topped the 3.5% year-over-year growth rates reached before the recession. Also, those gains have flowed disproportionately to people switching jobs — workers who stay with one employer for long periods of time still aren't always getting regular raises.

Why have wages been slow to recover? Economists generally chalk it up to the decline of labor unions, slow productivity growth , automation that allows employers to replace workers if they get too expensive, and a continued influx of workers from the sidelines who may not have been able to afford to hold a job because childcare or transportation costs exceeded their wages.

But economists argue that the longer unemployment remains very low, the more ground workers are likely to regain — especially those that employers have historically overlooked, like people of color, the disabled and the formerly incarcerated.

Markets roared back, but not everyone has benefited

Most American businesses — or at least, those that survived the recession — didn't take long to return to profitability. As a percentage of GDP, after-tax profits have been significantly higher than they were during previous decades, as the share of corporate income going to labor has declined.

The stock market started rebounding almost immediately and has hit record after record, driven in part by loose monetary policy that propped up asset values. Even after a couple of stumbles brought on by instability in China and a confluence of factors at the end of 2018, the S&P 500 has still more than quadrupled in value since bottoming out in February 2009.

That sustained bull market didn't help everyone, however. Only 54% of Americans say they own stocks either directly or through a 401(k), according to a Gallup poll in 2017 , down from 65% in 2007. Wealthier people were able to buy low during the downturn and benefit from ten years of gains, while poorer people had to get by on their wages, contributing to the continued rise in wealth inequality in the post-recession period.

Housing prices recovered as well, but more so in tech hubs like San Francisco, New York, even Denver and Portland. Those are also the cities where zoning restrictions have kept a lid on housing supply, sending prices soaring as high-paying tech employers flocked to previously-abandoned city centers.

In those places, high housing prices are bad news for renters, who have faced much steeper increases in the cost of shelter as a result of the years-long drought in non-luxury apartment construction that developers are still trying to build their way out of .

In other places, housing values remain depressed. Smaller cities in the industrial Midwest were hit hard by the drop-off in manufacturing employment during the recession. Even after tens of thousands of vacant properties were demolished and the foreclosure rate virtually disappeared, homes are still worth far less than they were in sections of Detroit, Cleveland and Erie — which has a lingering impact on residents' financial well-being.

Warning signs are on the horizon

For both consumers and businesses, memories of widespread defaults and bankruptcies have faded fast, and we are living in a new era of debt.

Cheap capital has prompted companies to take nearly as much leverage as ever as a percentage of the economy. Much of it has gone into share buybacks and acquisitions , propelling a movement towards consolidation that some argue has retarded business dynamism and stifled innovation .

Although total mortgage debt has subsided — in part because so many people lost their homes through foreclosure after the financial crisis — Americans have racked up more credit card debt than ever and student debt has multiplied nearly sevenfold since the end of the recession, as people took refuge from a bad job market by going back to school.

More important than the raw amount of debt, however, is the difficulty consumers are having when they try to pay it back. Here, student debt is proving to be the biggest problem : Delinquency rates for student loans have surpassed those for home loans, since the jobs graduates got weren't always well-paid enough to keep up with rent, grocery and loan payments at the same time.

Unlike mortgages, student loans can't be discharged in bankruptcy. And there's mounting evidence that those heavy debt burdens have kept young people in particular from purchasing their first homes, although the overall homeownership rate has rebounded to its historic average.

Finally, government borrowing has also ballooned as a percentage of GDP over the last decade. It started during the Great Recession, when the government passed several stimulus measures to resuscitate the economy. The national debt should have subsided as tax revenues recovered, but massive tax cuts in 2017 only added more red ink .

All that debt is only sustainable if interest rates remain as low as they have been on account of the Federal Reserve's prolonged strategy of buying US Treasuries in order to stimulate the economy. But an interest rate shock would swamp many deeply indebted companies in short order.

That's why it's important to think about the risks — which at the moment center mostly around international trade.

The United States' negative trade balance with other countries isn't necessarily a problem in itself, since American consumers benefit from products made more cheaply in other countries, and American businesses often locate their more knowledge-intensive jobs on their home turf. But it has proven a political hot potato, as President Donald Trump has imposed or threatened tariffs countries he says are "taking advantage" of the United States.

Whether or not he's right, the escalating trade war tops the list of concerns for growth going forward for members of the National Association for Business Economics, whose most recent survey showed that 56% of its members saw trade tensions as the biggest downside risk for the economy in 2019. That doesn't necessarily mean tariffs will tank the recovery — but of course, it's happened before .

When will the expansion end?

Although it's an imperfect measure, the single broadest measure of economic growth is gross domestic product, and by that metric, the US has been performing fairly consistently since 2014.

The economy has had only a handful of negative quarters since 2009, after four of them in a row. What's more, the US growth rate has remained significantly above those of most other developed countries, due in part to an oil and gas boom that has boosted exports and helped revive manufacturing.

But even that is dropping off, with most economists projecting growth on the order of 2% in 2019, down from almost 3% in 2018, and declining thereafter. In that scenario, the best the United States can hope for is that a slow march towards economic health just gets a bit slower, rather than erasing a decade of painful progress.

If the US does end up in another recession, it may not be immediately obvious. The National Bureau of Economic Research, which officially dates the beginnings and ends of business cycles , took 15 months to declare that the turning point had occurred in June 2009.

Fortunately for America, research has found that long and deep recessions lead to more durable recoveries — not the other way around.