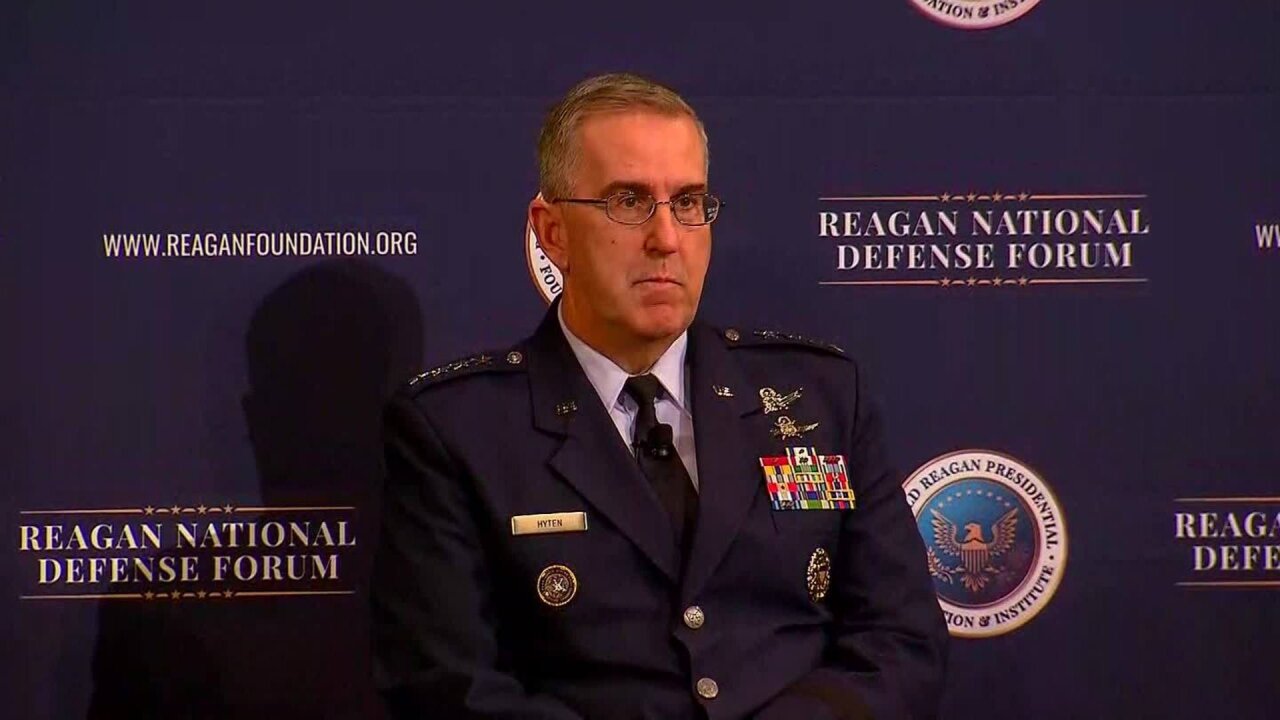 The Air Force has cleared President Donald Trump's nominee to become vice chairman of the joint chiefs of staff of allegations of sexual misconduct, a senior military official directly familiar with the investigation told CNN Wednesday.

The allegations surfaced in April shortly after four-star General John Hyten was nominated to be the President's second most senior military adviser.

The official said no evidence or information had been found to substantiate nine allegations made against Hyten by a junior female officer.

Two senior military officers confirmed to CNN that the officer has made similar allegations against other personnel in the past.

CNN has not been able to speak to the officer who made the allegations against Hyten.

Questions have been raised about why a confirmation hearing for Hyten had not yet been scheduled, three months after he was nominated for the role.

Hyten, who would take over from Air Force Gen. Paul Selva, is currently the head of US Strategic Command, which is critical in monitoring nuclear testing and missile launches around the world and advising the President, if needed, on nuclear launch options for the US.

Officials tell CNN the allegations have caused dismay among dozens of officers who are uncertain if the administration will still support Hyten's nomination. There also questions over whether Hyten will want to proceed with a public confirmation hearing that may discuss the allegations even though the military has cleared him.

In a June 25 letter to acting Secretary of Defense Mark Esper, Democratic Sens. Elizabeth Warren and Tammy Duckworth -- who are both members of the committee -- criticized how the Air Force handled the case, saying "that he remains in command while under criminal investigation raises serious questions about whether the Department is affording General Hyten preferential treatment because of his rank and pending nomination."

It's not clear if Wednesday's briefing alleviated the concerns raised in the letter but a Senate staffer confirmed that Hyten's accuser has contacted members of the committee.

CNN has contacted members of the committee for their reaction to the briefing but has not heard back.

The Pentagon has not issued any formal statement on the status of Hyten's nomination. "We have not received any change in his status," said Col. DeDe Halfill, a Pentagon spokesperson.

The news of the investigation comes as the Pentagon continues to operate without a Senate-confirmed secretary of defense. Many other senior military positions remain unfilled or are filled by officials in acting roles.

Those vacancies are a reflection of the Department of Defense's ongoing struggle to establish an unprecedented transition plan aimed at ensuring continuity of leadership at the highest levels while there is still no confirmed secretary of defense following the dramatic implosion of Patrick Shanahan's nomination last month.

The investigation examined allegations made by the female officer concerning what she claimed were nine incidents that occurred between February 2017 and February 2018. The senior military official said, "In early April we received allegations of abusive sexual contact and inappropriate relationship against General Hyten" after his nomination was made public. The Air Force Office of Special Investigations initiated a criminal investigation on April 15."

The official noted that criminal investigations do not take a position on substantiating allegations but simply report evidence and facts learned. The evidence and facts were then reported to another four-star general who reviewed the report and had the authority to convene a court martial or engage in disciplinary action. That officer -- Gen. James Holmes, head of the Air Combat Command -- declined to take any action, ruling that there was insufficient evidence and facts to substantiate the allegations.

"The court martial convening authority considered the facts in the report and based on the advice of their counsel decided that there was insufficient evidence to profer any charges against General Hyten or to recommend administrative action against the general," the senior military official told reporters.

The senior official was adamant that the woman's allegations were taken seriously and procedures were followed and they also said no evidence was presented that warranted re-assigning Hyten during the investigation.

"At this point, we've conducted an exhaustive investigation, talked to 53 witnesses across three countries and 13 states, reviewed tens of thousands of emails, interviewed folks that were closest to the alleged incidents, and we're just out of rocks to turn over, it's that exhaustive," they added.