Teen captured after shooting at officer then running away

Three teens have been arrested after one of them shoots at a Corpus Christi Police officer tonight.

According to Lt. Michael Pena with the Corpus Christi Police Department, around 11:04 p.m., officers went to Cuiper Park to check out suspicious subjects in the area.  When the officers attempted to make contact with one of the subjects at Cuiper Street and Spring Street, one of the individuals began walking down spring.

One of the officers tried to make contact with that person but he began firing a gun at the officer. Several shots were fired missing the officer but striking the officer’s car.  Another policeman who was also at the intersection of Cuiper Street and Spring Street returned fire at the shooter who then ran away.

Police detained the other two minors and began a search of the neighborhoods for the shooter.  The officers blocked parts of Ramsey Street while they investigated.  About an hour and half later, the suspect was apprehended.  Lt. Pena says the suspect was not struck by bullets. 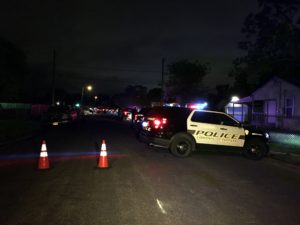 Lt. Pena says all three suspects including the shooter are juveniles.  No word on what led to the shooting. The shooting suspect is facing aggravated assault with a deadly weapon, evading arrest and possibly other charges.

Police went door to door for a safety check on residents in the neighborhood. At this time, no one has reported any injuries or damage.