The Texas Medical Board has temporarily suspended a local obstetrician-gynecologist accused of sexually assaulting three of his patients.

According to an email sent Wednesday morning, the board issued the suspension against Dr. Juan Antonio Villarreal Tuesday. It states the temporary suspension was issued after the TMB’s disciplinary panel determined “his continuation in the practice of medicine poses a continuing threat to public welfare.”

The board says the suspension was effective immediately.

Villarreal has been charged with three counts of felony sexual assault. Police and court documents show the alleged crimes took place in his office. He was arrested on December 17.

A court document lists three counts of alleged sexual assaults. The earliest is from November 2015, with other incidents reported in 2016 and 2018.

Count one states Villarreal intentionally or knowingly caused the penetration of the female sexual organ with his finger.

A third count accuses the doctor of another act on the female sexual organ with his finger.

The alleged victims were three separate women. According to police reports, the alleged sexual assaults happened when the women came in for routine exams.

In the most recent incident reported in February 2018, that victim had been a patient of Villarreal’s for more than 20 years.

Dr. Juan Villarreal is out on bond.

According to the TMB, a temporary suspension hearing will be held soon, unless the hearing is specifically waived by Villarreal.

Action 10 News has contacted both facilities to find out whether his privileges have been revoked. 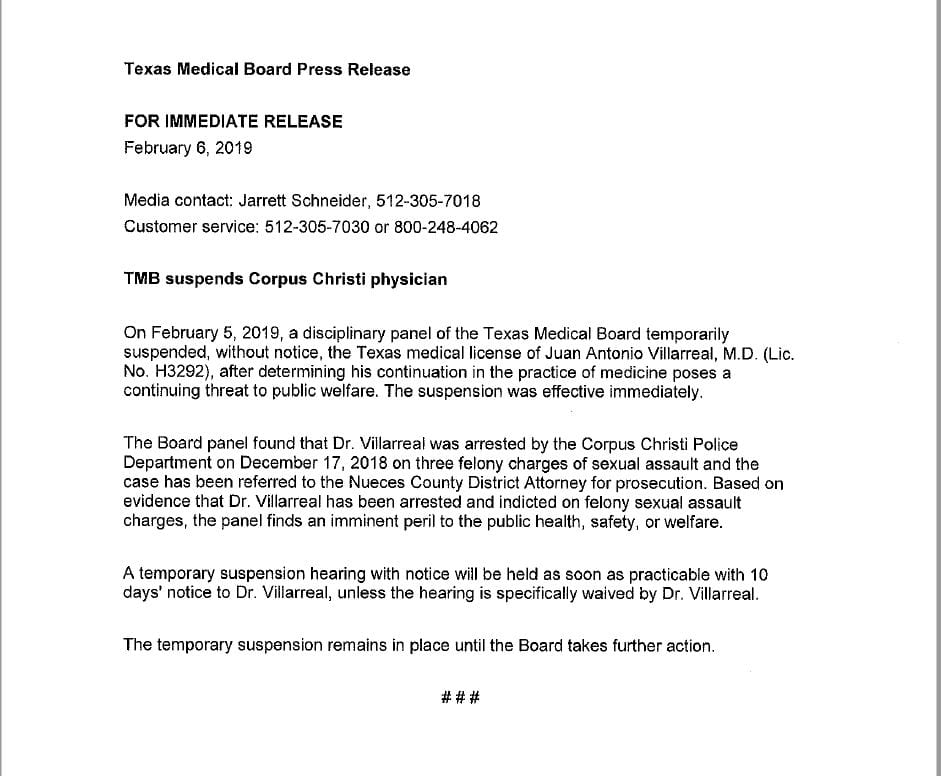