Buc Day Parade officials have released the 2019 Buc Days Navy Army Night Parade route.  In a press release today, officials say the construction of the new Harbor Bridge impeded the old route along Leopard Street.  The parade will not utilize the crossover section at Crosstown and Leopard Street.  This year, the parade will still go on for 2.5 miles however it will start at the American Bank Center and end at the intersection of Staples Street and Buford Street.

Maps can be found on www.bucdays.com for both the Night Parade and the Junior Parade.

Print out a copy of the route map here:  Buc-Days-Parade-Route-2019 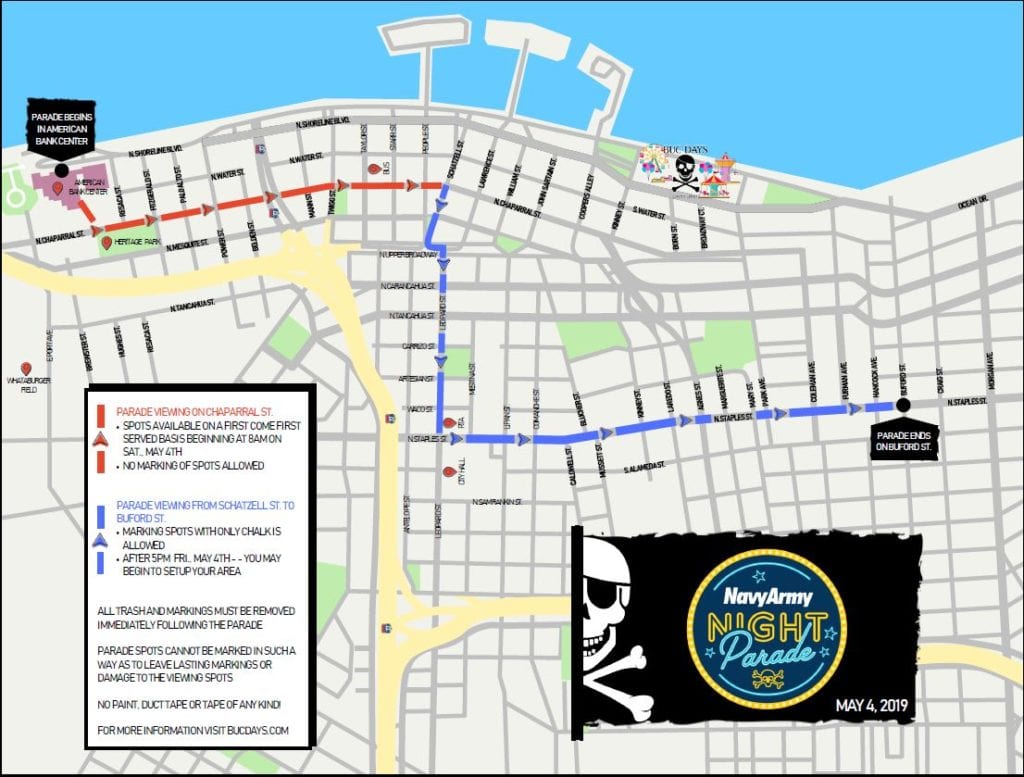 PRIOR TO 5:00pm on Friday, May 3rd – Parade viewing spots may be marked from SCHATZELL STREET TO BUFORD STREET.   Mark your spots with chalk only.  NO PAINT OR TAPE PLEASE.  Under no circumstances may parade spots be marked in such a way as to leave lasting markings or damage to the viewing spot.

AFTER 5:00pm on Friday May 3rd – Parade viewing spots may be marked with chalk and stakes/rope from SCHATZELL STREET TO BUFORD STREET.  All must be removed immediately following the parade.  You may also begin “camping out” for the Saturday night parade at this time.

You may park in front of a private residence or business on the public sidewalk only if you have permission from the owner.

Parade Viewing on CHAPARRAL STREET to SCHATZELL STREET is walk up, day of viewing only beginning at 8am, May 4th, 2019.

Some other frequently asked questions: