Corpus Christi police are looking for a man who fired a gun in a westside neighborhood.

The shooting happened outside of a home near Carver Drive and Easley Street Sunday morning.

According to police, a disturbance occurred outside of the home and a man pulled out a gun and fired at least four gunshots.

One of the bullets struck a home not connected to the incident.

At the time of the shooting, children were playing outside on the streets.

Lt. Carl Williams, with the Corpus Christi Police Department, said, “It should be pretty obvious to not do something like that. “You don’t know where the rounds are going, and the worse thing that could happen is some innocent person get hit down the street that was minding their own business.”

Investigators said they do have the identity of the suspect.

When the suspect is arrested, he faces charges of aggravated assault with a deadly weapon. 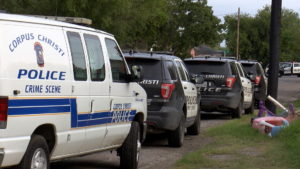