Gregory Volunteer Fire Department in need of volunteers and funds

In the small city of Gregory, volunteers play an important role in protecting the community.

“Gregory had that flood a few weeks ago, we were out doing a lot of water rescues, we were out here for about eight hours,” says Gregory Volunteer Fire Department spokesperson Amy Amy.

But the GVFD is in desperate need of help.

Amy says the no pay and conflicts with day jobs prevents people from committing. She says it has been at least two years since they had enough volunteers.

The department is sounding the alarm for personnel as well as funds.

“A lot of our trucks are outdated, we have one truck right now that’s out for maintenance, it’s been out for quite a while,” says Amy.

The department is hosting a waffle breakfast fundraiser on Saturday, October 13, at the Immaculate Conception Catholic Church from 7 a.m. to 11 a.m. 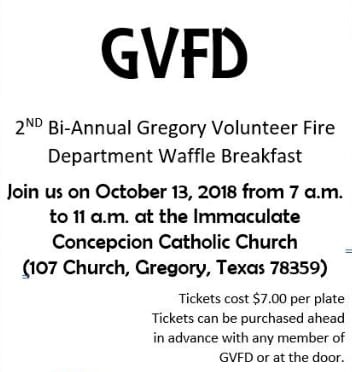 “We need first aid kits for our trucks, we don’t run medical calls, but if we are on scene before an ambulance gets there we do have EMT’s on staff,” says Amy.

They are also hoping to purchase a drone to help them in wildland fires. They are inviting the community to help them continue doing what they love one waffle at a time.

“We have a lot of passion for our community and to serve the community,” says Amy.