The tropical disturbance coming ashore is starting to create flooding on streets and will likely impact drivers:

The surface low continues to slowly shift farther west, with moderate to heavy rainfall spreading more across the region. The Flash Flood Watch is still in effect across South TX. If you encounter a flooded roadway turn around, don’t drown! #txwx #stxwx pic.twitter.com/cz7wx9Pq6K

2:45 a.m. – Lt. Saldana, with the Corpus Christi police department, says police are expecting another band of showers to come into Corpus Christi. Saldana said people need to stay indoors because the city could see more showers that could lead up to additional flooding. Police commanders also advised staying away from the Interstate 37 and State Highway 286 exchange and underneath the intersection.

2:30 a.m. -Corpus Christi police are now removing barricades in the areas that were affected by flooding.

2:03 a.m. Photos from the North Beach area show how badly the flooding was over there. 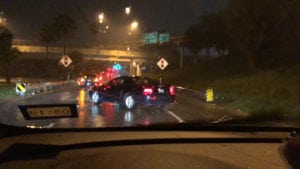 12:55 a.m. -There are reports on Facebook that flooding is occurring at Staples Street, Hancock Street, and Santa Fe Street because of the overnight showers.

12:30 a.m. -There are reports on social media reporting there is flooding along 18th Street.

12:15 a.m. – Corpus Christi has received two inches rain because of the tropical showers.

12 a.m. -Here is a photo outside KZTV Action 10 news station around 12 a.m. because water is starting to rise. 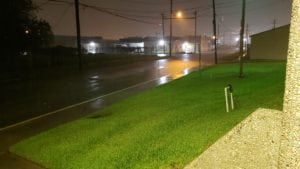 11:58 p.m. -There are reports of flooding in downtown Corpus Christi along Kinney and Water Street.

11:45 p.m. -There are reports of street flooding along State Highway 286 and several intersections. The intersections are Staples Road, Agnes Road, and Laredo Street.

Here’s an interactive radar map for the KZTV10-TV viewing area.