The current Veterans Administration policy does not recognize that US Navy veterans who served offshore during the Vietnam War, could have been exposed to Agent Orange.
But help, in the form of benefits, may be on the way thanks to a proposed bill co-sponsored by District 27 Rep. Michael Cloud. 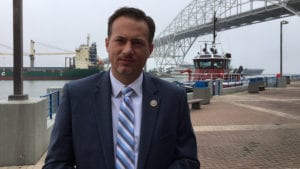 Tuesday night, the US House of Representatives approved the proposed ‘HR 299’, a bill that provides benefits for those Navy vetetrans who served offshore during that war, and could have been exposed to Agent Orange, a herbicide used by the US during the the Vietnam War..
The Bill’s called the Blue water Navy Vietnam Veterans Act.

Advocates of HR 299 have argued that veterans who served offshore were susceptible to Agent Orange due to runoff into water that veterans on offshore carriers used for basic needs like drinking, bathing, and cooking.
Rep. Cloud co-sponsored the bill.
“Up until now, only those who served on land have been automatically eligible to receive care. And so what the Blue Water bill does is, it extends to those who served in the region just offshore. Many of them drank the water that had the runoff, or handled it on the ships.”

So, who exactly would be eligible for these benefits;
1. Veterans who served no more than 12 nautical miles from the shores of Vietnam between Jan. 9, 1962-to-May     7, 1975.
2. Veterans who served in or near the Korean Demilitarized Zone between Sept. 1, 1967-to-Aug. 31, 1971.
3. Children of veterans who served in Vietnam from Jan. 9, 1962-to-May 7, 1975, and suffer from spina bifida.
4. Veterans must prove they have experienced one of diseases resulting from Agent Orange.
(The Agent Orange Act of 1991 established a list of diseases eligible for service-connected benefits.)
5. Veterans must be able to list where they served.

Remember, HR 299 is not law yet.
The House voted on it last night, but the Senate still has to.
And once they pass it, President Trump has to sign it, before benefits would be extended beginning January 1st, 2020.