BREAKING: Police are looking for an abducted two-year-old

An Amber Alert was issued around 7:22 pm by the League City Police Department for Malakhi Elijah Bankhead.

Malakhi is two years old, African American, male, has black hair, has brown eyes, and has eczema on his elbow.

According to the Amber Alert, Malakhi was allegedly abducted by 21-year-old Katherine Nicole Ulrich and 24-year-old Cody Albert Bankhead. Ulrich is a white female with brown hair brown eyes and numerous tattoos. Bankhead is a black male with black hair and brown eyes with a scar on his upper arm.

They were last seen in League City driving a White, 2015 BMW X3 with a Texas License Plate number of KSW8656. 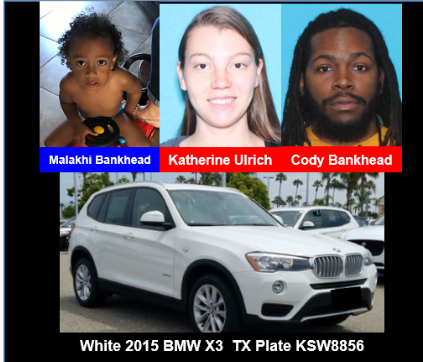 Police believe the child to be in grave or immediate danger, so any information that could be helpful should be called in at 281-332-2566.