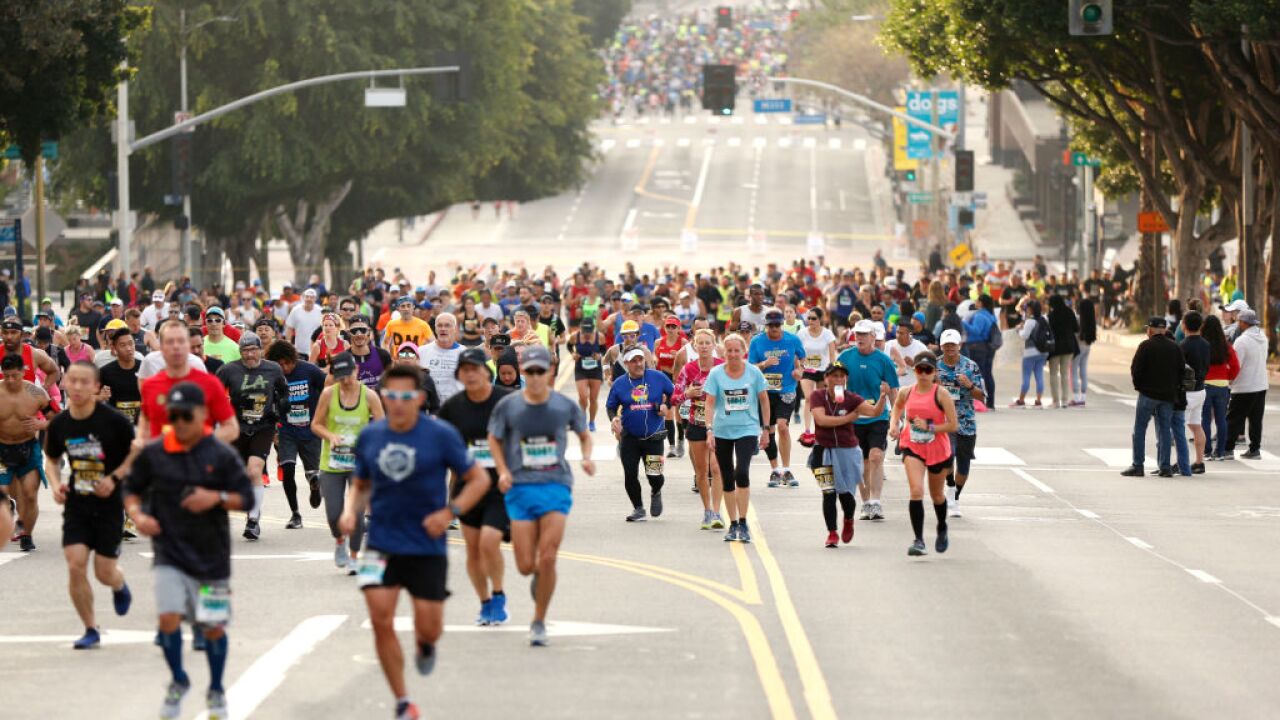 Just months ago, 70-year-old Dr. Frank Meza finished the Los Angeles Marathon in what would have been a record-beating time for his age group: 2 hours, 53 minutes and 10 seconds.

On Thursday he was found dead in the Los Angeles River under a bridge about a mile from Dodger Stadium, days after race officials threw out his result over allegations that he'd cheated -- accusations that he'd denied.

The county coroner's office said it is investigating his death as a possible suicide. An autopsy hadn't been performed as of Friday afternoon.

His widow says she doesn't believe he could have taken his own life, and the family points to a recently discovered heart condition.

While the family awaits official word, they emphasize this: He was under enormous stress over his disqualification and the cheating claims made in blog posts and media reports. And they believe he was treated unjustly.

"He was targeted, bullied and we tried to defend him the best we could," his daughter, Lorena Meza, told CNN on Friday. "He was so devastated that people could actually believe this."

How the race officials and others say he cheated

The controversy percolated after Meza, a retired South Pasadena physician and a longtime runner, finished the Los Angeles Marathon on March 24.

The total time would have been more than a minute faster than the official world record for his 70-74 age group .

As for his cohorts in Los Angeles that day, his nearest 70-74 competitor was more than an hour behind.

The result caught the eye of Derek Murphy, who runs MarathonInvestigation.com , a website devoted to calling out marathon cheaters.

In May, Murphy started posting information and photos suggesting that Meza cut the course at that race and other marathons. In other words, leaving the course and re-entering farther along, perhaps using other transportation in the process.

By June 28, Conqur Endurance Group, which runs the Los Angeles Marathon, announced it had seen enough.

"After an extensive review of original video evidence from official race cameras and security cameras at retail locations along the race course, Conqur Endurance Group has determined that Dr. Frank Meza violated a number of race rules during the 2019 Skechers Performance Los Angeles Marathon, including re-entering the course from a position other than where he left it," the statement reads .

"Dr. Meza's actual running time for at least one (5-kilometer) course segment would have had to have been faster than the current 70-74 age group 5K world record," the group said.

That would have been "an impossible feat during a marathon," the statement reads.

Meza denied he had cheated.

He told The Los Angeles Times he had left the course to find a restroom, continuing down a sidewalk for a time before he found one.

"I didn't cut the course," he told The Times on Monday , days before his death.

This wasn't his first disqualification

Meza was disqualified from marathons twice before, The Times reported .

In 2014, when Meza was in his mid-60s, the Sacramento area's California International Marathon threw out his time of 2 hours 52 minutes because of what looked like anomalously speedy split times over the final miles, the paper reported.

Meza told The Times that when race officials approached him about those splits, he gave them no explanation.

"I don't run that kind of time," he said, according to The Times. "I actually told them, if you disqualify me, I won't protest. I don't want any doubts to be there."

The same race again disqualified him for irregular splits in 2016 -- and then banned him from entering again, The Times reported .

Both The Times and MarathonInvestigation.com said that Meza's marathon times had generally been dropping over the past 10 years -- from around 3 hours 30 minutes a decade ago to under three hours by 2014.

"I got better because I started running almost twice what I was used to," Meza told The Times . "I just increased my mileage."

The website writer and race organizers react to Meza's death

On Friday, Murphy posted a statement saying he was "deeply saddened to learn of Frank Meza's death."

"My heart goes out to his family and friends, and I wish for everyone to be respectful and to keep his loved ones in mind," Murphy's post reads.

"There will be a time for comment and a broader discussion, but at this point, I feel that we should all allow those close to Frank the space to grieve."

Murphy declined to comment further when contacted by CNN.

"We are deeply saddened to learn of the death of Dr. Frank Meza. Our thoughts and prayers go out to his family."

The physician was a runner first, his widow says

In an interview, some of Meza's relatives told CNN that the online allegations of cheating, and the comments that they drew, were dragging on his morale.

Meza's widow, Dr. Faustina Nevarez, told CNN that the night of her husband's death was the first time she'd looked at the online allegations of cheating against him.

His family denied that he had cheated.

"He never cuts courses. He's the most honest man in integrity you will ever meet," Nevarez said.

Meza had been running since age 14, his relatives said, competing at Los Angeles' Cathredral High School.

The Los Angeles Times, which interviewed him before he died, reported he transitioned from 10Ks to marathons a decade ago.

But his family says he first ran a marathon in 1980, and has run about 80 of them, off and on, since then. He'd also been an assistant coach with a high school boy's cross country team.

His son, Dr. Francisco Meza, said he would sometimes train with his father. He said the elder Meza would often clock 6-minute miles and run 100 miles a week while preparing for marathons.

"When he was doing time trials ... you can't keep up with him. If I knew he was time-trialing that day, I wouldn't run with him, because it was" futile trying to keep up, the younger Meza said.

He planned to run another marathon with an observer, but he had heart trouble, family says

His family said that Meza planned to run the Chicago Marathon with an "observer" runner, in part to prove he could run well.

But Francisco Meza said his father recently had heart difficulties, including atrial fibrillation, and was being scheduled for surgery.

"He wanted to come back after open heart surgery and prove them wrong," Francisco Meza said.

Still, he was exercising. When Tina Meza last saw her husband Thursday morning, he told her he was going for a run.

"We'll have lunch," she recalls him saying before he left.