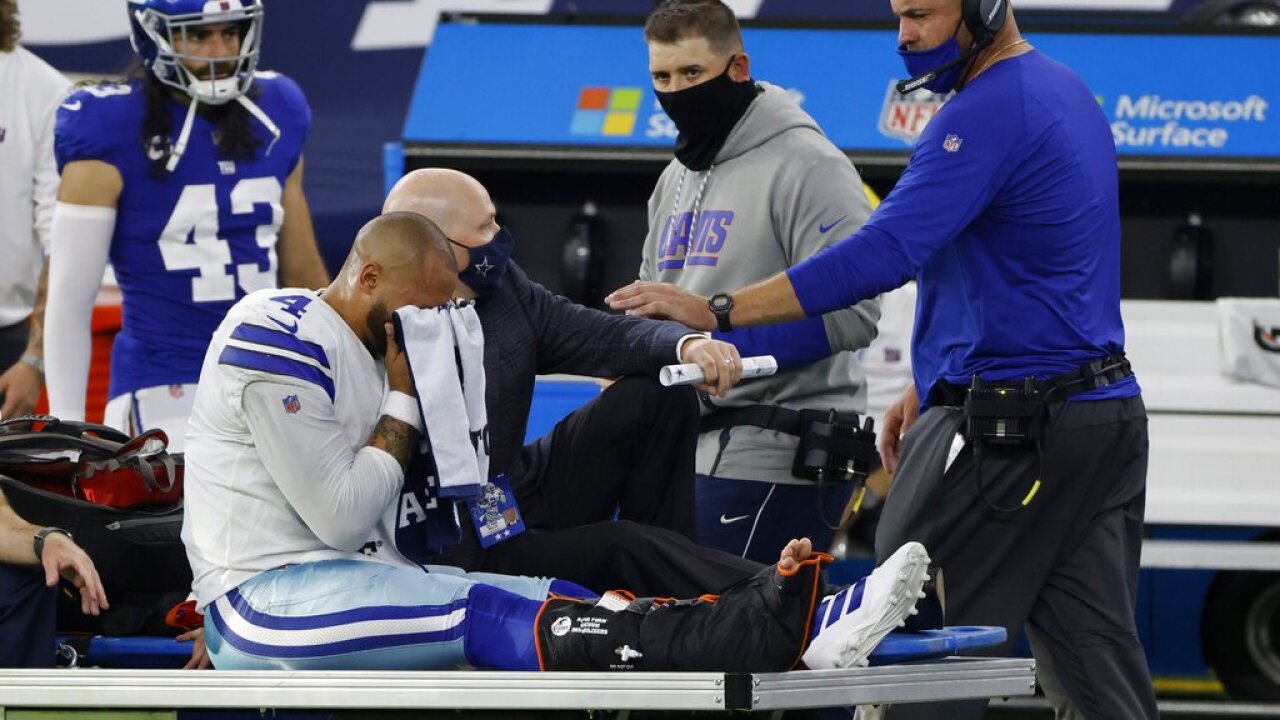 Copyright 2020 The Associated Press. All rights reserved.
Ron Jenkins/AP
An emotional Dallas Cowboys quarterback Dak Prescott, wipes his face with a towel as he is carted off the field after suffering an unknown right lower leg injury in the second half of an NFL football game against the New York Giants in Arlington, Texas, Sunday, Oct. 11, 2020. The Giants' Nate Ebner (43) and staff look on. (AP Photo/Ron Jenkins)

After Dak Prescott's season ended on a gruesome ankle injury, his running mate for all five of their seasons with the Dallas Cowboys had a hard time getting through the post-game interview.

Ezekiel Elliott sounded crushed, even after backup Andy Dalton led a drive to Greg Zuerlein's second game-ending field goal of the season as the Cowboys rallied twice in a 37-34 victory over the winless New York Giants on Sunday.

“I can’t even think right right now,” Elliott, the two-time rushing champion, said to no question in particular as he continued trying to absorb the third-quarter injury to Prescott, a two-time Pro Bowl quarterback who was the unheralded fourth-round pick the same year Elliott went fourth overall.

“It’s hard to kind of put in words,” Elliott, who rushed for 91 yards and two touchdowns, said in the middle of an answer about Dalton's role in the rally. “I’m sorry. I’m just struggling a little bit right now.”

Prescott was going down in the arms of defensive back Logan Ryan at the end of a 9-yard run in the third quarter when the Dallas quarterback’s lower right leg got caught under Ryan and appeared to snap.

Prescott reached for the leg as he writhed in pain, and TV images showed his right foot bent at an awkward angle away from his leg. He was fighting back tears as he was carted off with a cast on the leg. Most of Prescott’s teammates rushed to greet him, as did several New York players, including Ryan.

The team said Prescott had a fracture dislocation of the right ankle and was taken to a hospital, where surgery was planned later in the day. Prescott started the first 69 games of his career, from the beginning of his rookie season.

“I feel terrible for him,” first-year coach Mike McCarthy said. “He was having a tremendous year in the short time working with him. He’s made such an impression on me and he’s clearly the leader of this football team. I have no doubt that he’ll bounce back from this and this will be all part of his great story.”