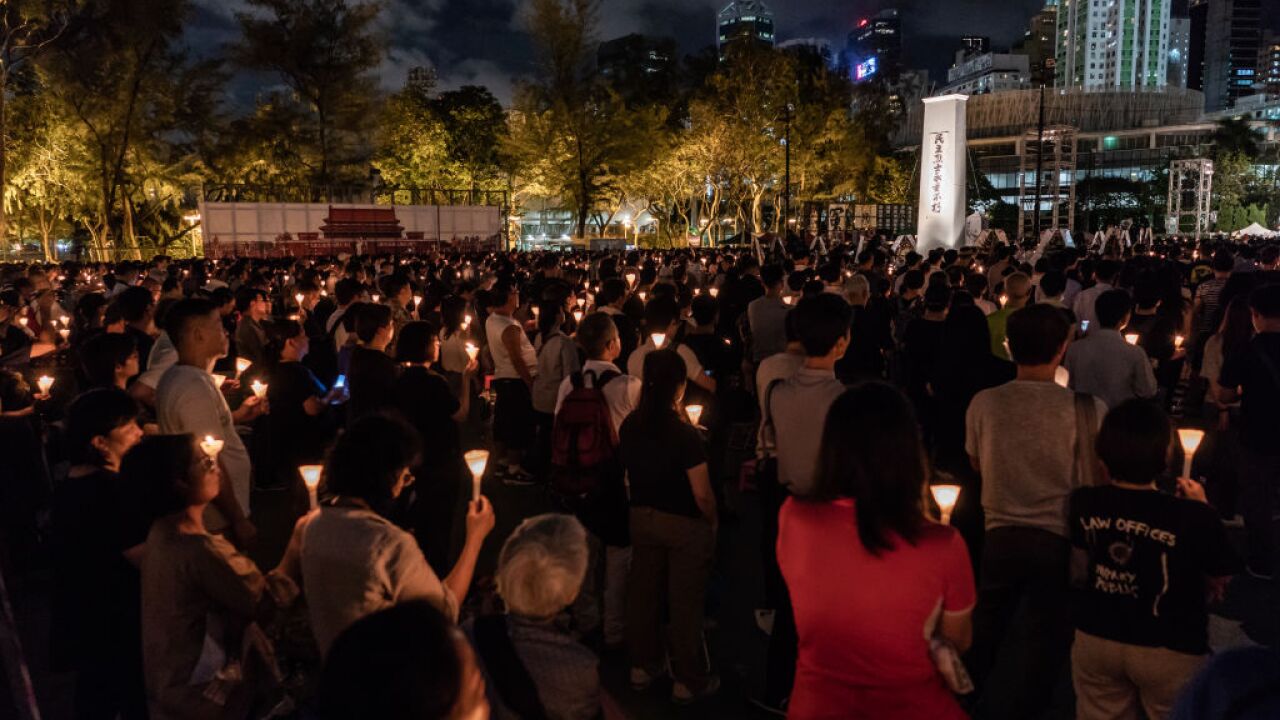 As commemorations for the 30th anniversary of the Tiananmen Square massacre take place worldwide Tuesday, any coverage or discussion of the event will be tightly censored in China.

Hundreds of people were killed on June 4, 1989, as People's Liberation Army troops cracked down on pro-democracy protesters in and around Beijing's Tiananmen Square. Events will be held and speeches made to commemorate the massacre and those who died in cities around the world.

In central Taipei, capital of self-ruled Taiwan, a massive inflatable version of the iconic "Tank Man," who defied the military as they entered Tiananmen Square, has been on display for several weeks.

On Monday, Taiwan's Mainland Affairs Council called on Beijing to "face up to historical mistakes and apologize as soon as possible for the crackdown."

"In the past 30 years, Beijing lacked the courage to calmly reflect on the historical significance of the June 4th Incident," the council's statement said. "Rather, they blocked the information and distorted the truth about it and tried to conceal the crime."

Activists will hold a rally in Washington on Tuesday, with representatives of dozens of human rights groups, including Amnesty International, expected to attend, as well as House Speaker Nancy Pelosi.

US Secretary of State Mike Pompeo said in a statement Monday that the massacre still stirred the conscience "of freedom-loving people around the world."

"We salute the heroes of the Chinese people who bravely stood up 30 years ago in Tiananmen Square to demand their rights," he said, urging the Chinese government to make a "full, public accounting" of the incident.

The biggest event will take place in Hong Kong, the only place on Chinese soil where mass commemorations are held. A candlelit vigil has been held in Victoria Park every year since 1990, with hundreds of thousands attending during key anniversaries.

But across the border, the Chinese authorities will be watching attentively for any attempts to remember the massacre.

Tourists were visiting Tiananmen Square as usual on Tuesday, under the close watch of police and subject to frequent security checks.

On Monday, Chinese state-run newspaper Global Times said the massacre had been a "vaccination" against future "political turmoil" in the country, trumpeting China's economic progress in the decades since.

It wasn't the first Chinese comment on the anniversary. Speaking at the Shangri-La Dialogue in Singapore on Sunday, Defense Minister Wei Fenghe said crushing the protests had been the "correct policy."

A day that changed China

For weeks in 1989, hundreds of thousands of students and workers gathered in Tiananmen Square, in the heart of the Chinese capital, to call for greater democracy as well as political and social reforms.

At the height of the protests it seemed like they could be successful, forcing a government that was already pursuing economic reform to also accept limited political liberalization. But hardliners won an internal battle within the ruling Communist Party and a crackdown was ordered.

That decision changed China forever, ending hopes of a gradual move towards democracy. Today the Communist Party is stronger than ever, with President Xi Jinping recently throwing out term limits and clearing his way to serve for life.

"The government was decisive in stopping the turbulence, that was the correct policy," he said.

The events of June 4 have been wiped from the history books in China and any discussion of the crackdown is strictly censored and controlled. Tiananmen is a prime target of the Great Firewall, China's sprawling online censorship apparatus.

Tuesday will be a major test of that system, which activists have spent years attempting to get past by using coded phrases such as "May 35" or "that year." But it's a test that it will likely pass with ease.

In the lead-up to June 4, internet users in China complained about difficulties accessing virtual private networks, a common method of bypassing the firewall, while posts on Chinese social media have been restricted or deleted as companies ramp up censorship during this sensitive period.

June 4 has been nicknamed "internet maintenance day" for the number of websites that go offline around the anniversary, their owners deciding that being dark is safer than accidentally publishing something which could provoke the ire of the authorities.

On Tuesday, CNN's website was blocked by the Great Firewall. While the move is not unprecedented, CNN was available to users in China ahead of the June 4 anniversary, as confirmed by GreatFire.org , an independent site which analyzes internet censorship in China.

The Cyberspace Administration of China, the government body which oversees internet regulation, did not immediately respond to a request for comment.

Other international media organizations, including the New York Times and the BBC, have long been inaccessible to users inside China, according to GreatFire.org.

Speaking ahead of the anniversary, Mak Hoi-wah, chairman of the June 4 Museum in Hong Kong, said this type of mass censorship was damaging to the country.

"Without understanding the historical facts, we will not be able to move on," Mak said. "The Chinese government is trying to suppress it because they don't want their wrong deeds be remembered by the people."