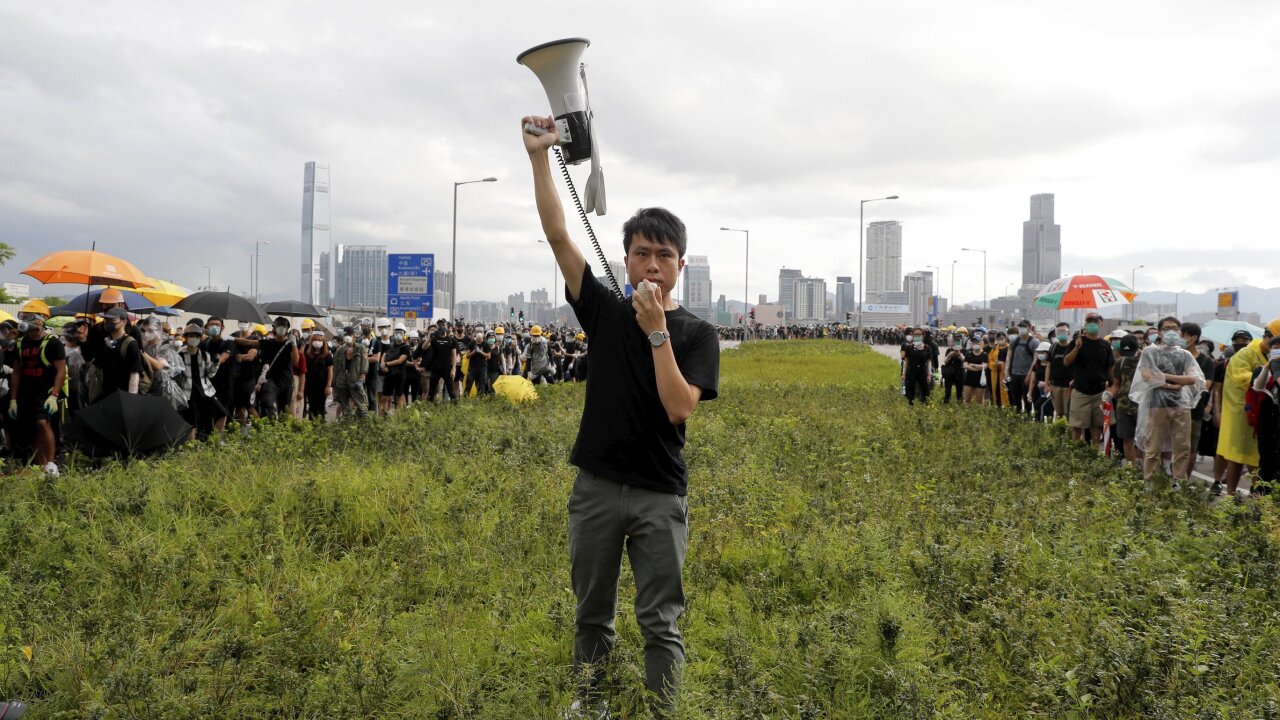 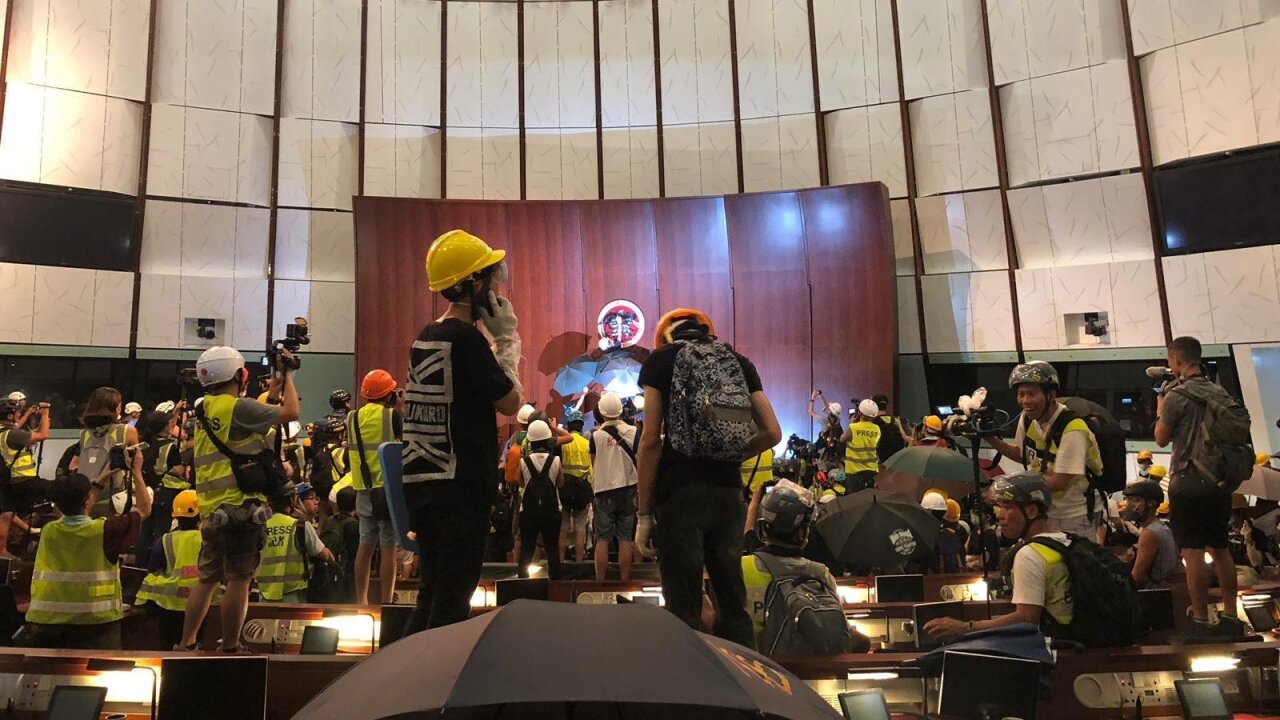 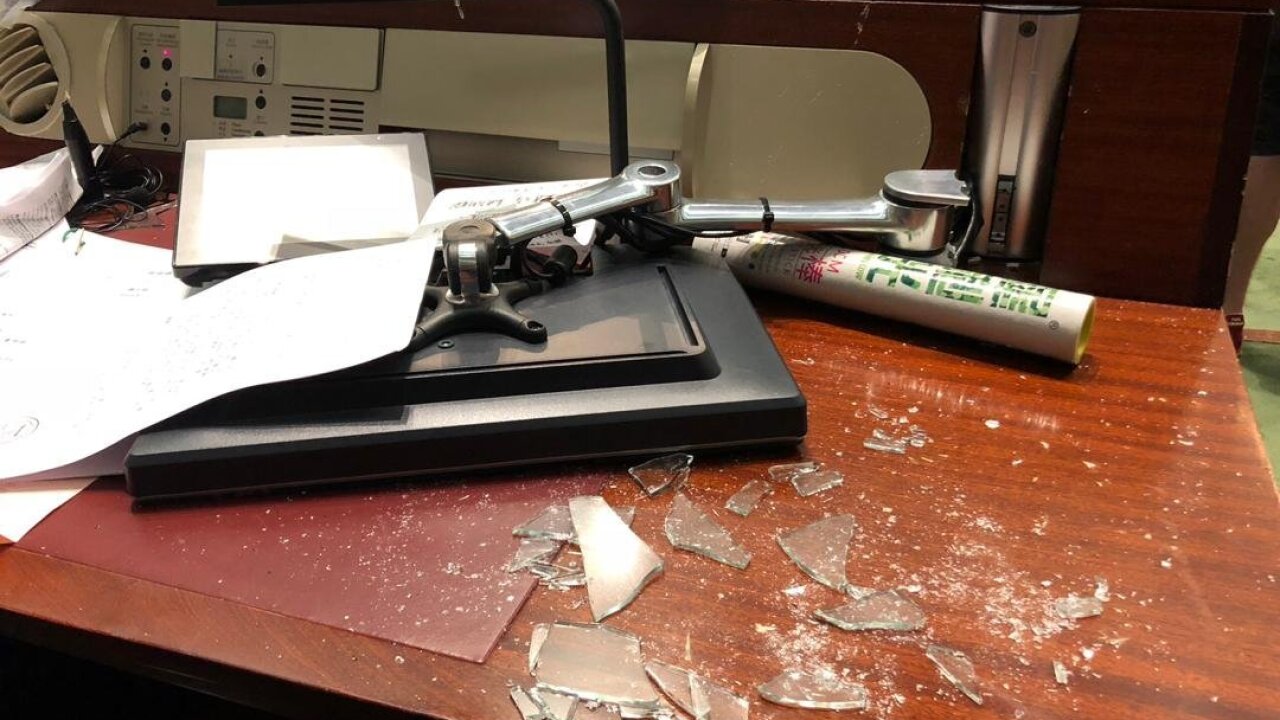 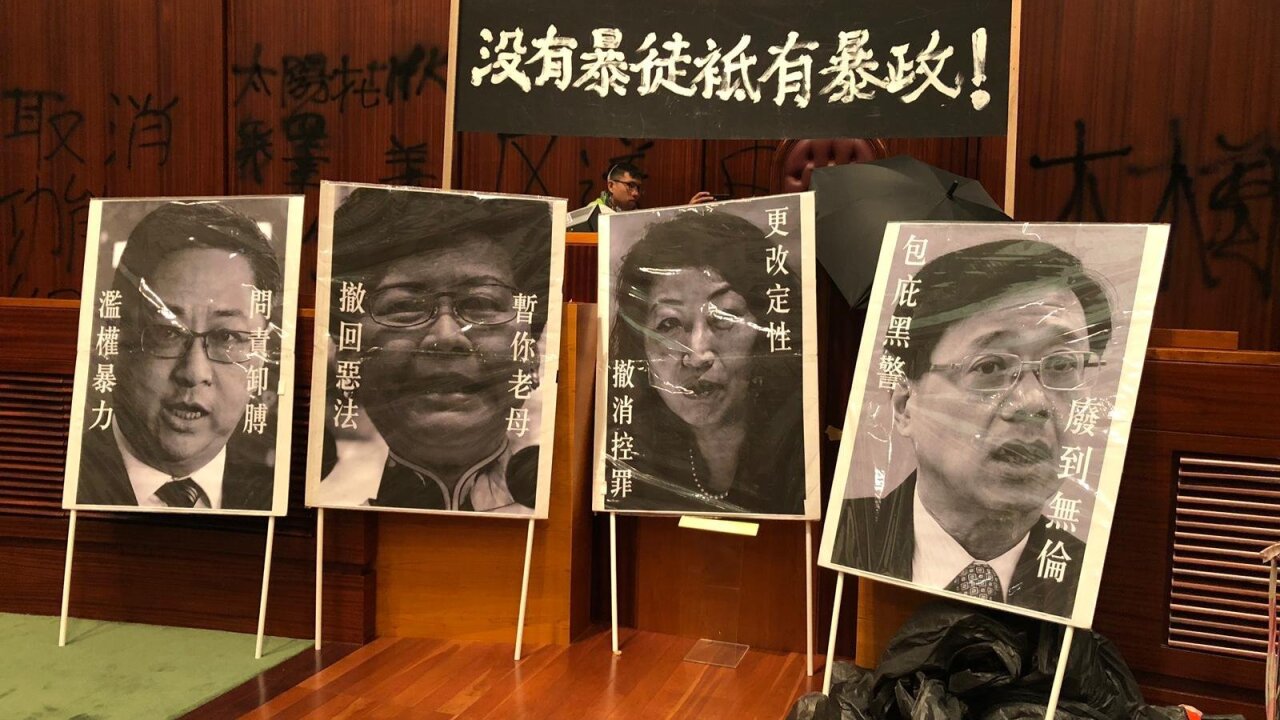 A group of demonstrators smashed through glass doors and stormed Hong Kong's government headquarters on July 1, the anniversary of the city's return to Chinese rule. The dramatic events marked a break from Hong Kong's peaceful protests around a controversial extradition bill.

The core of mostly young activists were inside the Legislative Council building for hours before leaving late on Monday night. Inside, they spray-painted slogans in Cantonese on the walls of the legislative chamber, torn down portraits and raised a black banner, that read: "There is no way left," mounting an open challenge to China and the city's embattled Chief Executive, Carrie Lam.

The protesters had used trolleys as battering rams to bust through the entrance, pry open metal shutters and occupy the site. They also set up barricades and opened a line of umbrellas in an attempt to hold the complex, but shortly after midnight, scores of riot police descended on the demonstrators, firing tear gas and using baton charges to disperse the crowd. It is not clear why police did not clear the building earlier.

One young university student, who didn't want to be identified, said protesters felt they had no choice while the government refused to listen to their demands. "The government didn't do anything when two million people asked them to. This is why we're taking further action," he said.

The protestors' siege of the Legislative Council building was starkly different than a peaceful march just one street over, on the same day; there, tens of thousands of Hong Kong citizens carried signs calling for greater democracy and an end to the extradition bill.

Monday is the 22nd anniversary of the semi-autonomous city's return to Chinese sovereignty. The date is marked annually with protests calling for greater freedoms.

Protesters had hoped to block or interrupt an official flag raising ceremony marking the occasion, attended by Lam.

The ceremony marked a rare public appearance for Lam, who was forced to publicly apologize for the introduction of the extradition bill last month which sparked public outrage. Protesters fear the extradition bill could be used to send residents to mainland China for political or business offenses.

After mass protests, the bill was shelved, and Lam says there are no plans to restart the legislative process for now. However, protests have not stopped, amid calls to abandon the bill completely. Another march on June 16 attracted around 2 million people, according to organizers.

Small demonstrations have targeted police and government offices, shutting them down and trapping police officers in their headquarters for hours.

Many protesters are still angry over police use of tear gas and rubber bullets to force people off the streets on June 12, when protesters successfully blocked off the city's legislature and prevented lawmakers from debating the extradition bill.

In her speech at the flag-raising ceremony Monday, Lam promised to "ease anxiety in the community, and to pave the way forward for Hong Kong."

While Beijing has stood by Lam, she is facing criticism from all sides for her handling of the crisis.

Lam says the bill was her idea, not Beijing's, and she has taken responsibility for a rushed roll-out and failure to communicate with the public.

Even much of the city's business community, traditionally conservative and unwilling to get too involved in politics, came out against the bill, and some pro-government figures criticized Lam for pushing it through the legislature against proper procedure.

Lam justified that move as necessary in order to extradite a wanted murderer to Taiwan, but that justification was undermined by Taipei's statement in May that it would not accept any transfer under the controversial bill.

Protests and anger over the bill have reinvigorated an opposition movement that had appeared to be in the doldrums after repeated losses in the wake of the 2014 Umbrella Movement.

Now Lam is facing not only continued demonstrations against the bill -- and demands for her resignation -- but also a return to the issue behind the 2014 protests: that Hong Kongers are not able to choose their own leader.

A key reason Beijing was keen to keep Lam in place, even if she wanted to resign, is that losing her would require choosing another chief executive within six months. Currently that is done by an election committee heavily stacked in Beijing's favor, and renewing this process would be sure to restart an angry political debate that had been safely kicked down the road to 2022.

Now that issue seems to be coming to the fore anyway, piling more pressure on Lam and creating new headaches for her bosses in Beijing.