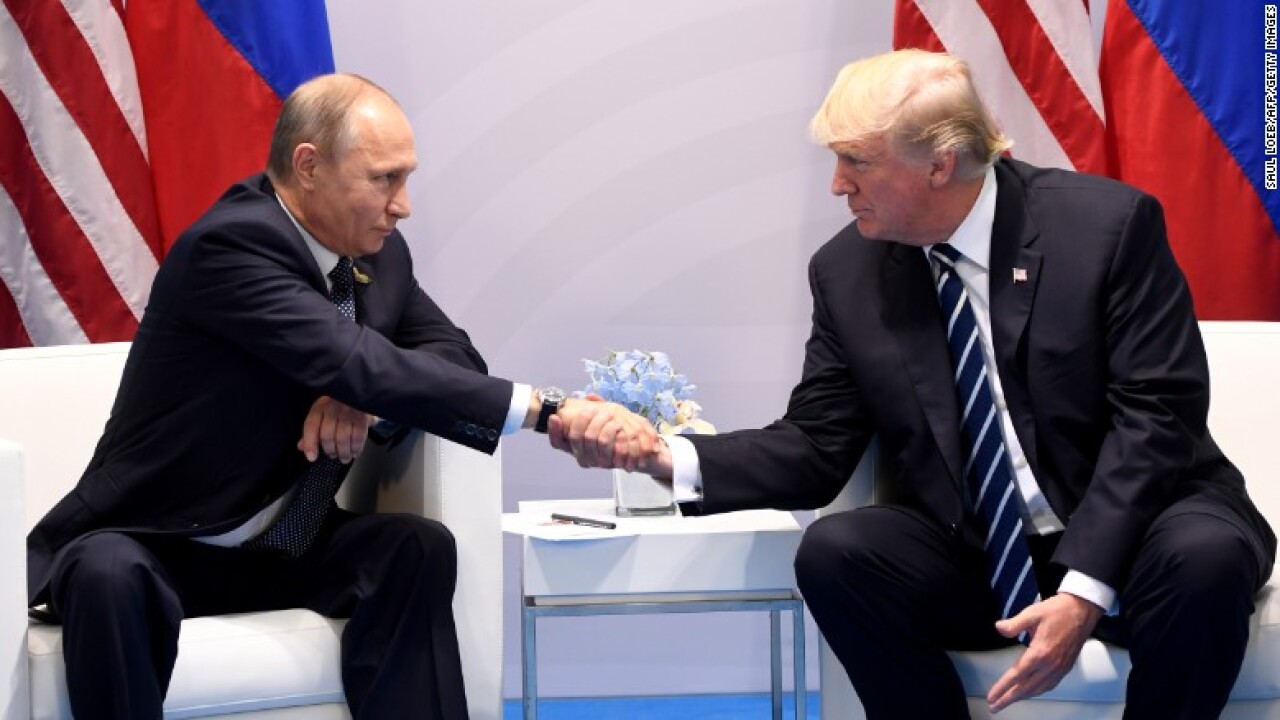 President Donald Trump issued a breezy warning to his Russian counterpart Friday against meddling in US elections , laughing and smiling as he told his counterpart not to interfere.

"Don't meddle in the election, please," Trump said, smirking and wagging his finger at Putin . He only raised the matter after being questioned by reporters whether he would issue a warning.

"Yes, of course I will," Trump said before making his joking aside.

It was an off-hand moment that came at the start of the men's first meeting since the conclusion of Robert Mueller's investigation .

Trump said he enjoyed a "very, very good relationship" with Putin, and said "many positive things are going to come out of the relationship."

"We have many things to discuss, including trade and some disarmament, some little protectionism, in a very positive way," Trump said.

When he made his playful admonishment against election interference, Putin sat beside him laughing. Trump's aides, including Secretary of State Mike Pompeo, also smiled.

It was hardly the serious confrontation that many of Trump's critics -- and even some officials in the US government -- have been hoping he'd make ahead of the 2020 contest, which could be vulnerable again to foreign meddling efforts.

Instead, it appeared to be Trump's way of injecting levity into what remains a deeply fractured Washington-Moscow relationship.

In the seven months since Trump last encountered his Russian counterpart, the Russians detained a former Marine on espionage charges and were accused by Mueller in his report of waging a "sweeping and systematic" influence campaign during the 2016 election.

That's a distant cry from the warmed-up relations with Russia that Trump entered office vowing to pursue. When he sat down with Putin on the sidelines of the G20 summit here on Friday, ties between the two countries were near the lowest ebb since the Cold War.

In Trump's view, that's the fault of Democrats and overzealous investigators intent on finding links between his campaign and Russian officials. As he greeted Putin for the first time since Mueller concluded his investigation and released a final report , there was little to indicate his view of Moscow's influence efforts has changed or that his prickliness on the topic had waned.

"I'll have a very good conversation with him," Trump told reporters at the White House as he was departing for Japan.

But he declined to detail what he might say regarding election meddling, or whether he would raise it at all.

"What I say to him is none of your business," Trump said.

It was a defensive prebuttal to inevitable criticism and skepticism about Trump's meeting with Putin -- an outcome that appeared even more likely following Trump's casual warning on election meddling.

After every meeting and phone call, Trump's critics have accused him of fealty to Putin. In part, their suspicions are rooted in the veiled nature of those sessions, which have sometimes occurred without aides or even American interpreters present.

It's also based on Trump's general unwillingness to criticize Putin, despite his efforts that butt against American interests from the Middle East to Ukraine to election security. As Trump was traveling to the G20 summit, he lobbed criticism at Japan, India and Germany over trade and defense matters -- but not toward Russia.

In those sessions, Trump cast an optimistic view on trade, saying countries were desperate for access to US markets.

"We're the hottest country in the world right now, the United States, and everyone wants a part of it," he said before meeting Modi, whom he criticized on the way to the G20 for applying retaliatory tariffs on the United States.

In a sign of his close study of Trump, Abe provided the US President (known as a visual learner) with a map depicting new Japanese investments in the US with the header: "Japan has FIVE Additional Investments in JUST ONE MONTH."

Unlike many of his foreign peers, Putin hasn't engaged in that type of effort to woo Trump, though such attempts haven't appeared necessary.

"Whenever President Trump and President Putin meet there is a very strong domestic backlash after that meeting. But, in part, it's because there's a total lack of transparency about the topics of discussion and what the agenda is," said Heather Conley, the Europe program director at the Center for Strategic and International Studies in Washington. "But the President does not take that policy approach and, I think, continues to create the domestic backlash."

In an interview ahead of the meeting, Putin signaled a bullish view toward achieving his long-term goal of challenging western alliances. The "liberal idea" has "outlived its purpose," he said in an interview with the Financial Times .

Asked about a backlash against the so-called establishment taking place across the world, Putin said "the obvious problem is the gap between the interest of the elites and the overwhelming majority of the people".

"Some elements of the liberal idea, such as multiculturalism, are no longer tenable," Putin said.

US officials told reporters last week the session Friday had no "formal agenda," though listed Iran, Ukraine and the Middle East as likely points of discussion. The Kremlin has been similarly vague about an agenda.

Neither side is casting the meeting as a formal summit like the one the two leaders convened last summer in Helsinki. After that meeting, Trump appeared to take Putin's word that Russia didn't work to sway the result of the 2016 election.

The two men were due to meet again at last year's G20 summit in Buenos Aires, but that meeting was canceled after Russia seized three Ukrainian ships and detaining three dozen sailors. Trump tweeted at the time that another meeting wouldn't occur until the matter was resolved.

It's not resolved, with the ships still in Russian hands and the sailors held in pre-trial detention. Ukraine has demanded the release of the sailors, which it has deemed prisoners of war.

That did not stop Trump from scheduling the meeting this week, and during his photo-op with Putin, he said he hadn't raised the matter.

"We haven't discussed it," Trump said.

Among the topics he was likeliest to raise is a potential new arms control treaty brokered between the US, Russia and China that would replace agreements he's withdrawn from or let expire.

It's not clear whether he raised the case of Paul Whelan, a discharged US Marine reservist who was arrested in late December and accused by Russian authorities of espionage. He denies being a spy and his family says he was in Russia to attend a wedding.

The week the US Embassy in Moscow sent a note of protest to the Russian Ministry of Foreign Affairs over Whelan's treatment in a Moscow jail.

"We were asked to investigate this situation and ensure the safety and protection of Mr. Whelan," the embassy said in a statement. "The welfare of US citizens abroad is our top priority."