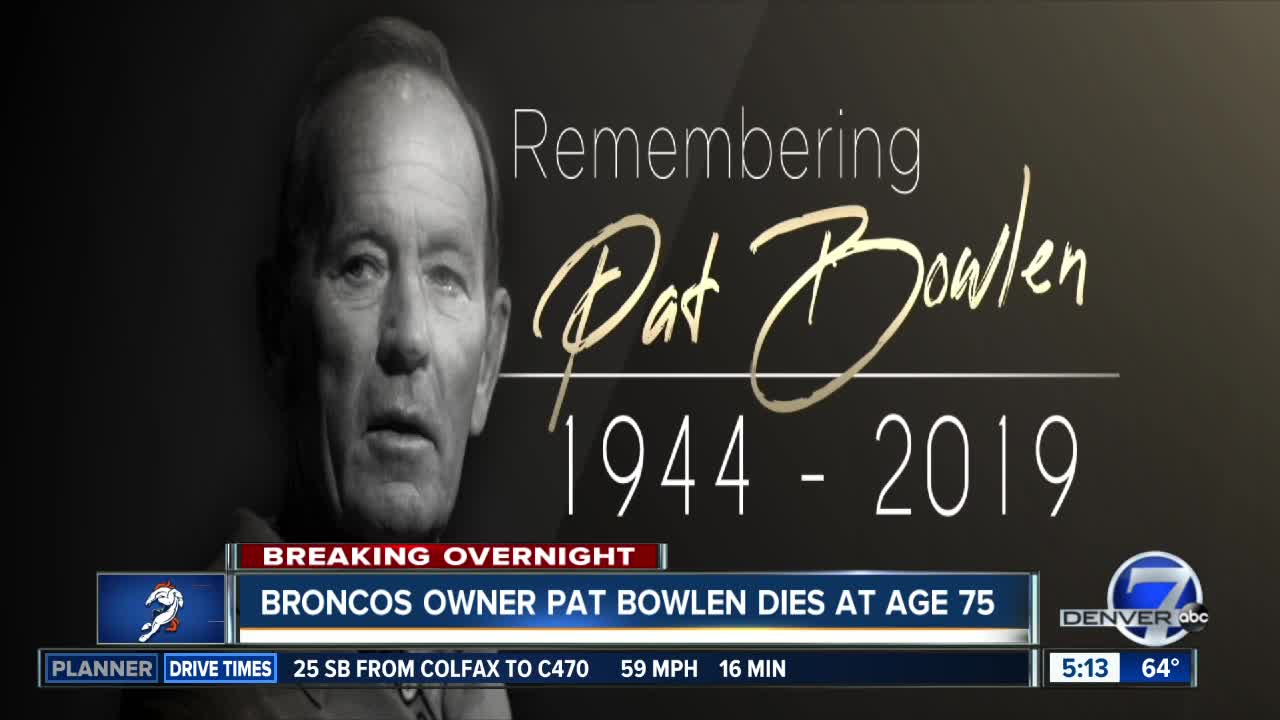 From players to coaches and support staff to fans, everybody is remembering Pat Bowlen's impact on Broncos football. 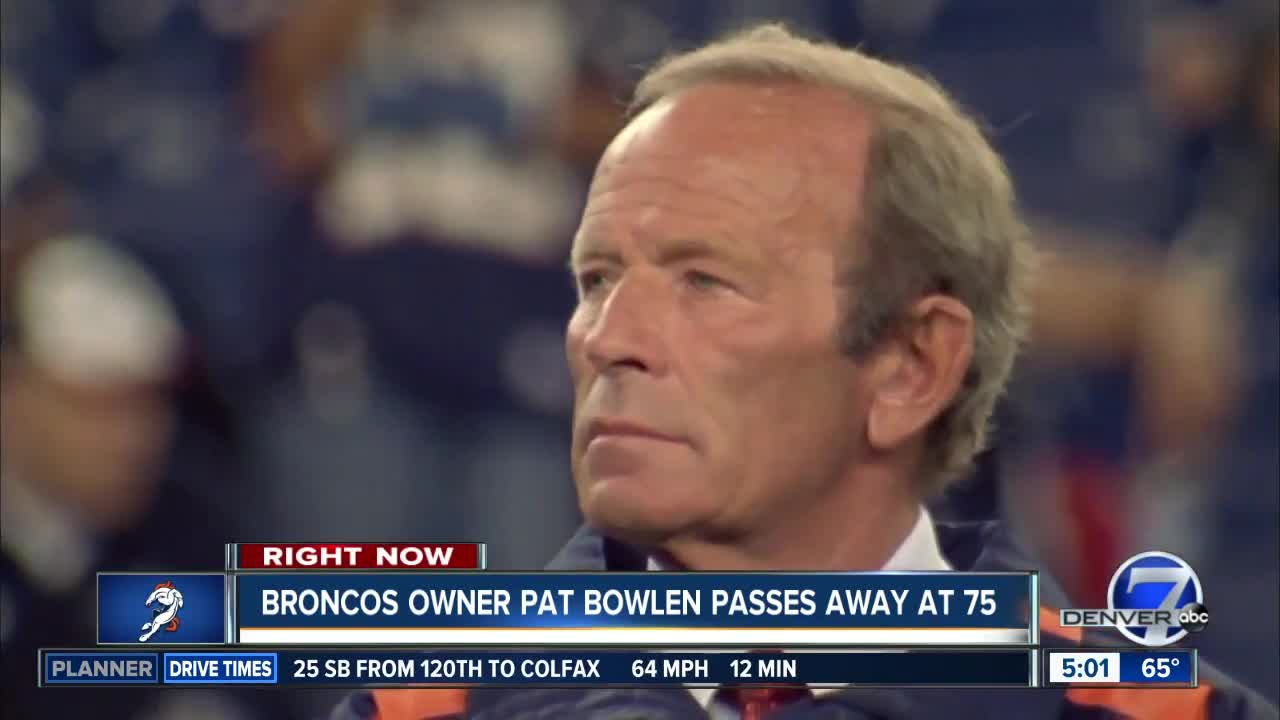 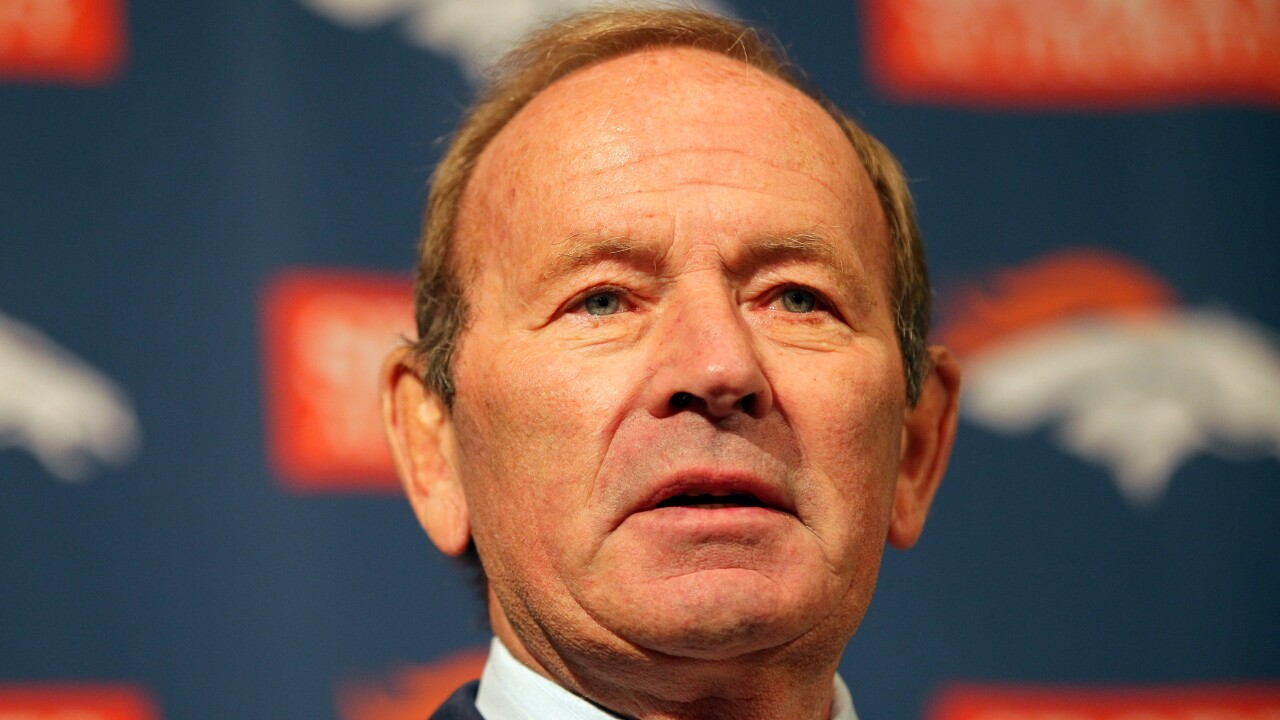 Pat Bowlen, the longtime Hall of Fame owner of the Denver Broncos, has died after a lengthy battle with Alzheimer's disease, his family confirmed in a statement early Friday morning. He was 75.

“We are saddened to inform everyone that our beloved husband and father, Pat Bowlen, passed on to the next chapter of his life late Thursday night peacefully at home surrounded by family," reads the statement from the Bowlen family. "His soul will live on through the Broncos, the city of Denver and all of our fans."

The statement continues, "Our family wishes to express its sincere gratitude for the outpouring of support we have received in recent years. Heaven got a little bit more orange and blue tonight.

"Pat Bowlen had a competitive spirit with a great sense of humor. As fun-loving as he was, he always wanted us to understand the big picture. We will forever remember his kindness and humility. More important than being an incredible owner, Pat Bowlen was an incredible human being.”

Bowlen’s passion for winning defined the Broncos, turning the franchise into a dominant AFC power for the better part of three decades. He bought the Broncos in 1984. Under his leadership, the team appeared in seven Super Bowls, and won championships in the 1997, 1998 and 2015 seasons. He is the most successful owner in Colorado team sports history. He will be inducted into the Pro Football Hall of Fame this summer.

“One of the most fortunate things to happen to that football team, and all the football teams to come after it, is that Pat decided to buy the Denver Broncos,” Broncos Ring of Fame linebacker Tom Jackson said. “I know he owned the team, but we were friends — friends first and foremost. But he likes to win, and he decided to do everything that he could to get the team to win. And along the way he endeared himself to the city of Denver because of all he did.”

Bowlen established the standard for Colorado professional sports success and popularity. In his three decades-plus as owner, the Broncos reached the playoffs 19 times.

Bowlen and his siblings bought 60.8% interest of the team in March 1984 for $78 million from Edgar Kaiser. On July 23, 2014, Bowlen transferred control of the team to his trust and president/chief executive officer Joe Ellis because of the owner’s affliction with Alzheimer’s.

Ambition for excellence fueled Bowlen, who provided freedom for his football personnel but established clear expectations. Bowlen set the tone at the team’s Dove Valley headquarters, walking the hallways, attending practice and often working out with injured players.

“He always wanted everyone else to get the credit, but he spoke up when he had to,” Ellis said. “He had a good way of applying pressure to people in this building.”

Bowlen helped grow the Broncos brand, extending a record home sellout streak that began in 1970. The franchise has grown in value to in excess of $2.1 billion, according to Forbes.

As an owner, Bowlen stood out because he stood in the background, a driving force with a heart in a sport often short on sympathy and compassion. “Be Number One in Everything,” reads the plaque next to his statue outside of Broncos Stadium at Mile High. Bowlen took care of his players, doing whatever he could to make them comfortable and play their best, from providing extra room on team charter flights, to TVs in the locker room, to upgrading training facilities or offering the latest in technological innovations. Players and coaches alike formed a strong bond with Bowlen, affectionately referring to him as Mr. B.

“Pat made a big difference,” said Dan Reeves, the Broncos’ coach from 1981-92. “Not that Edgar Kaiser wouldn’t give you whatever you needed, but Pat was more hands on. Pat built us a new indoor facility (at the old headquarters in north Denver). Before, when the weather was bad, we really didn’t have a place to practice.”

For players, there were no excuses.

Added Hall of Famer Terrell Davis, "The biggest compliment I can pay Pat is that he was a man who was humble, who didn't want the credit for anything. He just wanted to win. He didn't care about the cost. He wanted to win, and he gave you everything you needed to be successful. He came to my aid when I was in need. He called me after my surgery. He was just a cool owner, who didn't make you feel like he was the owner. He was special."

The zenith of Bowlen’s ownership came with back-to-back Super Bowl championship seasons in 1997-98. After carrying the burden as football’s bridesmaids, the Broncos broke through with Mike Shanahan as their coach, John Elway at quarterback and Davis as their star running back.

“We didn’t want to let him down,” Davis said.

After the Broncos won their first Super Bowl by defeating the heavily favored Green Bay Packers in San Diego, Bowlen accepted the Lombardi Trophy, then bellowed into the public address microphone: “There’s one thing I want to say here tonight and it’s only four words: This ... one’s ... for ... John!”

Amid roaring cheers, Bowlen handed the trophy to Elway. “I was surprised. Heck, I only threw for 130 yards,” Elway joked of the praise from his mentor and friend.

Bowlen loved sports growing up. He was born in Wisconsin and played high school football as a starting wide receiver for the Campion High School Knights of Prairie du Chien, a city of 6,000 on the Mississippi River bordering northeast Iowa. His mother, Arvella, grew up in Prairie du Chien and wanted her son to attend the Catholic school known for its academics and diverse student body. Bowlen was active in sports, playing hockey and football and running track before graduating in 1962.

He played football through his freshman year at the University of Oklahoma before turning his attention to academics and fraternity life. He earned business and law degrees from Oklahoma and later opened a law practice in Edmonton, Canada, while making a fortune in real estate, oil, gas and other natural resources. He remained a tenacious competitor as an athlete well into middle age. He maintained his love for the University of Oklahoma, always picking them in the weekly football pools he did with players.

In February 1984, one month before his purchase of the Broncos became official, Bowlen finished 135th out of 1,100 entrants in the Ironman Triathlon in Hawaii, where he has a home at the base of Diamond Head on Oahu. Longtime Broncos athletic trainer Steve Antonopulos smiled when sharing an anecdote about his good friend, who often ran from the airport to the team hotel on road trips.

On the way, he hit a pothole and broke his collarbone when he landed.

“I asked him, ‘What did you do?’ And here he was mad he got hurt because it could affect his training. I will always remember his competitiveness. He wanted to be the best at everything he did. I mean, just look at this place,” Antonopulos said, glancing at the Broncos’ plush Dove Valley headquarters as he fought back tears. “None of this is possible without him.”

A few weeks ago, the Bowlen family chose Antonopulos to present Pat into the Hall of Fame.

"He was very special. We just clicked. We became close friends," Antonopulos. "He was so competitive. You got used to it. The way he worked out. The way he ran the team. During the playoffs, he was always finding a way for us to win. And when we finally did, you really saw his compassion. He was a humble, humble man."

So who will be the next owner of the Broncos, charged with following in Bowlen's enormous footsteps? The easy answer is that nothing changes in the short-term. The trust, established by Bowlen, is charged with finding the most suitable Bowlen child. Over the past several months, daughter Brittany Bowlen, 29, has emerged as the front runner. She is not alone in her desire to run the team. Beth Bowlen Wallace has voiced her goal to run the Broncos, through the Trust has said she is not qualified. It has led to a lawsuit. When Bowlen was elected into the Hall of Fame, the family came together and honored their father which they will do again this August at his induction ceremony.

It will be the final shining moment for an owner who forever changed the path of the Broncos.

“Nobody is going to care whether the team is worth a billion dollars or whatever,” Bowlen once said. “That doesn’t matter. It’s more about how successful you were as an organization and as a team on the field and in the community.”