Trump says Brexit should and will happen during UK news conference 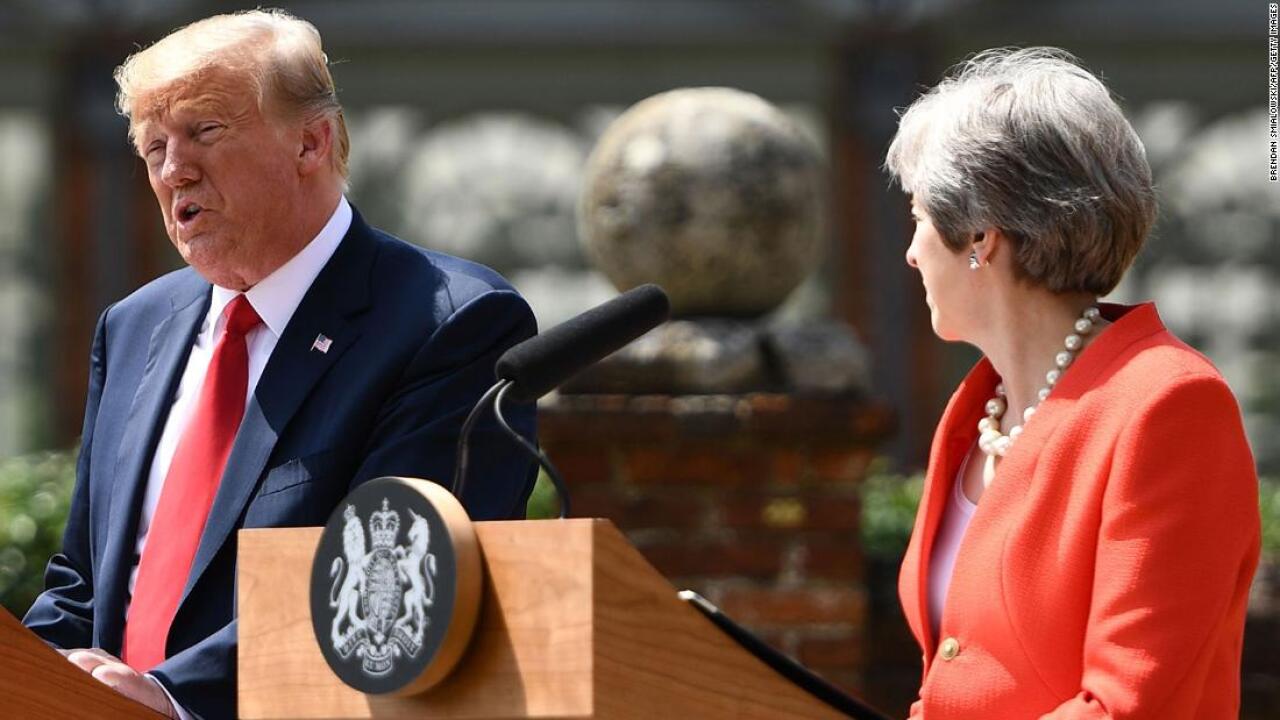 Britain's exit from the European Union will happen and should happen, President Donald Trump said Tuesday during a news conference alongside outgoing UK Prime Minister Theresa May.

Praising his British counterpart as doing a good job in handling Brexit, Trump said the planned divorce would be good for the UK.

The President also described a pair of British politicians as "negative."

Trump said the London mayor "should be positive, not negative."

"He's a negative force, not a positive force," Trump said. "I think he should focus on his job."

Asked again to respond to Corbyn, who spoke at a demonstration earlier in the day, Trump said he declined a meeting request from the opposition leader.

"He wanted to meet today or tomorrow," Trump said. "I decided I would not do that."

He said he believed Corbyn to be "somewhat of a negative force."

Trump is visiting Whitehall at a difficult moment. May is stepping down as head of her party at the end of the week, entering a lame duck period as the conservatives select a new leader. In some ways, her talks with Trump will be purely symbolic since she'll soon hand over her myriad troubles, principally the Brexit matter, to a successor.

But White House and British officials have maintained the talks will be substantive, given the general continuity in UK foreign policy between prime ministers and the long list of shared concerns between the two countries.

That includes Iran, which the UK still hopes will adhere to the Obama-era nuclear deal that Trump scrapped, and the Chinese telecom giant Huawei, which the US is working to prevent from establishing 5G networks in Europe and elsewhere.

However much Trump has warmed to May, he's been far warmer toward two of her vocal critics: Boris Johnson, a former mayor of London who once served in May's cabinet before resigning in protest; and Nigel Farage, a Brexit campaigner who makes semi-regular appearances on Fox News.

The 20-minute phone call was friendly and productive, the official said.

Johnson thanked the President for the invitation, but declined the meeting to focus on a political event that was happening at the same time, the official said. The President understood.

Johnson, a contender to replace May as prime minister, said he looked forward to catching up at a later date.

A day of stately ceremony and ungenerous feuding behind him, Trump moved on to the business of transatlantic diplomacy on Tuesday with meetings focused on trade, security and Britain's pained exit from the European Union.

Trump's royal engagements with Queen Elizabeth II, the centerpiece of his state visit here, are over, and for a short span midday his host will be the beleaguered Prime Minister Theresa May, with whom he will sit for group talks alongside other aides before convening a joint news conference.

Trump and May started the day jointly hosting a breakfast of business chiefs at the Tudor-era St. James's Palace, joined by the President's daughter and senior adviser Ivanka Trump and a dozen or so executives from American and British firms.

At the start of the session, Trump said it had been an "honor" working with his British counterpart and joked she should delay her departure as prime minister until a new trade deal is struck.

"It's an honor to have worked with you," Trump told May. "Stick around. Let's do this deal."

The US President will later tour the underground warren of rooms from which Winston Churchill ran his war efforts, a paean to a British leader Trump has long revered and hoped to emulate, at least in photographs.

Instead of taking his armored motorcade from point to point in London this week, Trump has relied on his Marine One helicopter -- even for short distances -- avoiding protests on the city's streets. London Mayor Sadiq Khan, who Trump insulted on Twitter as he was landing at Stansted Airport on Monday, has allowed demonstrators to fly a giant balloon depicting Trump as a baby in a diaper.

Only small gatherings materialized on Monday, but larger protests were expected on Tuesday. The Labour leader Jeremy Corbyn was expected to address one of the demonstrations.

Watch the full press conference below: