At least one person is dead after a series of tornadoes blew through central Indiana and southwest Ohio on Monday evening. 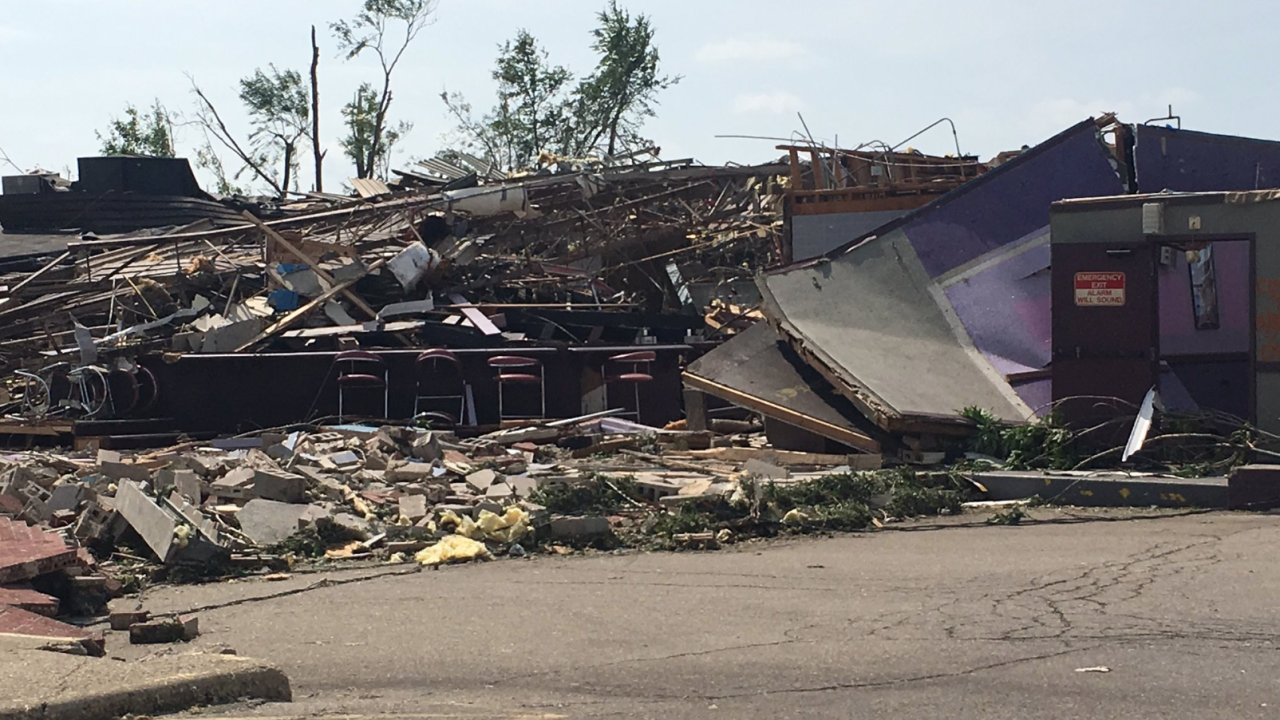 Western Ohio is cleaning up Tuesday after severe storms and tornadoes left swaths of devastation overnight, killing at least one person and injuring dozens as parts of the country brace for other severe weather threats, including flooding and deadly heat.

On the heels of a week of deadly weather in the central United States, Tuesday threatens more of the same, including possible severe storms in the Plains, South, Midwest and Northeast ; dangerous flooding in many states; and a suffocating heat wave in the Southeast.

At least three tornadoes are believed to have caused severe damage Monday night in western Ohio, including one in the city of Celina, where one man was killed and seven others were injured, Mayor Jeff Hazel said.

The storm apparently pushed a vehicle into a house there, killing Melvin Dale Hannah, 81, Hazel said.

Aerial drone footage above Celina -- roughly 70 miles northwest of Dayton -- showed houses destroyed, with wood and other debris scattered for acres near a pond there Tuesday morning.

Two tornadoes also are believed to have slammed the Dayton area Monday night just 30 minutes apart, and both crossed Interstate 75 near the city, the National Weather Service says.

One twister ripped through Michael Sussman's home in Brookville, northwest of Dayton. He said he'd just walked into a hallway when a front room was blown apart.

"I was hit by debris in my head," Sussman said. "I looked up and I no longer had a roof." He and his daughter and her boyfriend, who were hiding in a bathtub, dodged swinging electrical wires and debris as they left.

"We went out in the streets and children were screaming and crying. Devastation everywhere."

I-75 was littered with debris, so trucks with plows were helping to clear the highway early Tuesday, pictures posted online by the Ohio Department of Transportation showed.

More than 70,000 utility customers were without power in Ohio, the weather service in Wilmington said early Tuesday, citing data from the US Department of Energy.

The weather service will be conducting damage surveys for the next few days in the areas of Celina, New Madison, Laura, Dayton and Laurelville.

"We have downed power lines, but the biggest thing we're seeing is that there are trees just gone," Otten told WHIO. "My neighbor across from me has four huge trees and they're just shredded. Some of them are out of the ground and others just have no limbs left on them."

Beavercreek schools are already closed for the year, he said, but if they weren't, "I'd probably be closing."

"There are wires down and trees laying across the road."

Brookville Schools Superintendent Tim Hopkins said part of one school's roof was blown off and the front doors had been blown in.

The complex was "just a mess," he told WHIO , adding school will be canceled Tuesday.

Tuesday's heaviest rain is expected from Iowa and Missouri into Illinois.

"We continue to be stuck in the same pattern that plagued the country for (the) past several days," CNN meteorologist Taylor Ward said. "A large dome of high pressure will bring sweltering temperatures to the Southeast, while the middle of the country will continue to see the threat of severe storms and flooding."

Major flooding was underway Tuesday morning in western Arkansas along the Arkansas River.

Parts of the river could soon crest over 4 feet above the record, meaning "catastrophic flooding is possible in the towns of Van Buren and Fort Smith," CNN meteorologist Dave Hennen said.

The river is rising around North Little Rock, the city government said Tuesday on Facebook.

"The first thing everyone needs to understand is we are dealing with two situations. One is the rising river. The second is the ability to drain any storm water we might get here in our city over the coming days," it said on Facebook. "Our city's storm water drains to the river and if it can't go out, it could cause additional flooding."

City engineers are working with the US Army Corps of Engineers to monitor the forecasted river levels and determine the areas that could be affected, the city said.

"The Mayor's office will be coordinating staff to visit every home potentially affected by flooding," the city said. "We will be knocking on doors in the coming days to inform them of the potential threats to their homes."

Officials will also be dropping tons of sand to multiple locations and have "thousands of sandbags available."

In Oklahoma, where six people were killed last week in severe weather, the situation "still could get worse," Gov. Kevin Stitt said Monday.

"We still have water still rising in the east," he said. "We are not out of the woods yet."

The governor said he toured the destruction left by a tornado that struck Saturday night in El Reno, noting it was "unbelievable how violent" it was.

Some of the mobile homes, he said, "look like they were blown up."

In Tulsa, the weather service warned of severe weather threats ramping back up late Tuesday with storms, "very large hail" and tornado threats in the cards.

The Army Corps of Engineers said Monday it was accelerating the intentional release of water at the Keystone Dam, about 20 miles west of Tulsa. The water was being released to keep Keystone Lake from topping the floodgates.

Doing so will increase the strain on some of Tulsa's levees, Mayor G.T. Bynum said. He urged residents behind levees A and B to relocate temporarily.

Scorching temperatures in Southeast and mid-Atlantic

A days-long heatwave is expected to continue to bake the Southeast on Tuesday.

More than a dozen temperature records for May 28 are expected to be set from Washington south to Florida, with highs in the 90s and 100s in places.

Temperatures hit 99 degrees Monday in Columbia, South Carolina, and 100 degrees in Augusta, Georgia, both records, according to CNN meteorologist Ward. Gainesville, Florida, reached 102 degrees, an all-time record for May. Several other cities were close to the century mark.