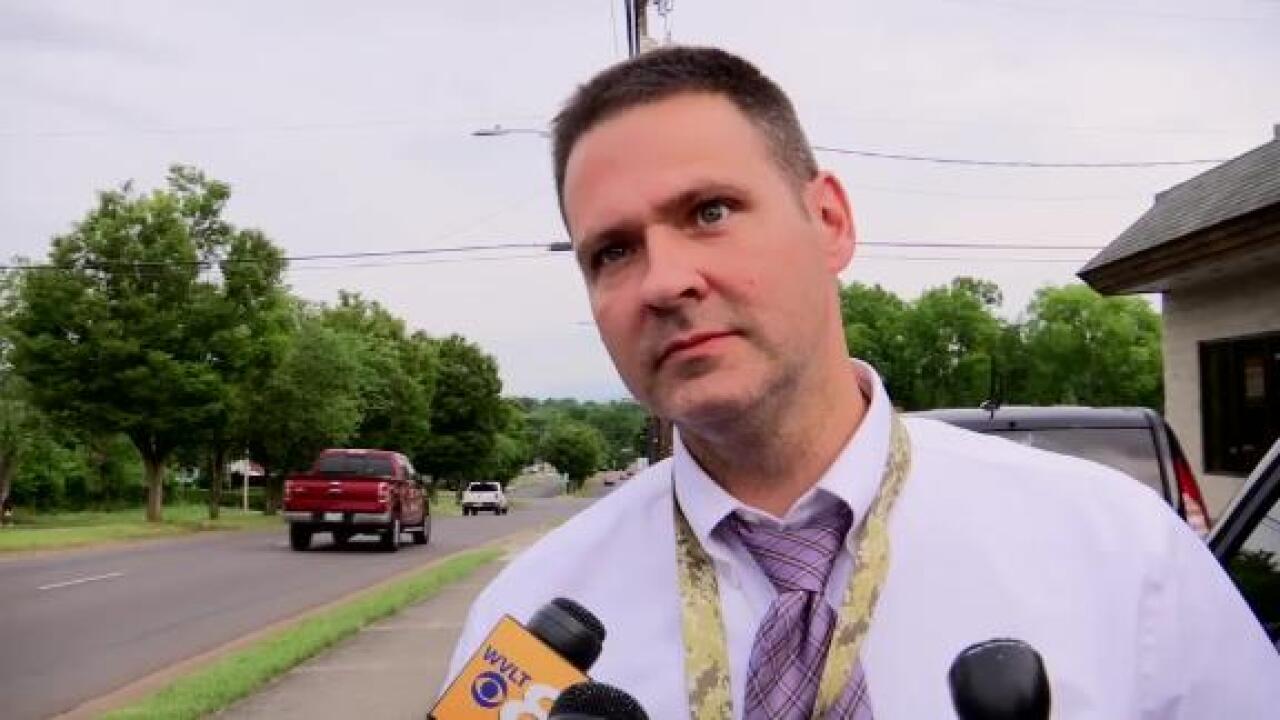 Authorities in Tennessee are reviewing all pending cases involving a Knox County Sheriff's Office detective after he gave a sermon at his church that called for the government to execute members of the LGBTQ community.

"They are worthy of death," Grayson Fritts said in a June 2 sermon at All Scripture Baptist Church, a small church in Knoxville that he leads.

The church posted the sermon online and then removed it, according to The Washington Post . The video was picked up by the Tennessee Holler , an independent liberal news outlet, and edited into a six-minute clip.

"God has instilled the power of civil government to send the police in 2019 out to the LGBT freaks and arrest them and have a trial for them, and if they are convicted, then they are to be put to death," he said in the clip.

Fritts said it would be easy to find people to arrest at events such as gay pride parades.

"We have a bunch of them we're going to get convicted because they have all their pride junk on, and they're professing what they are, that they're a filthy animal," he said.

CNN has not been able to reach Fritts for comment. Speaking to journalists before giving a sermon last Wednesday, Fritts said his anti-LGBTQ beliefs have not interfered with his work as a law enforcement officer.

"It's totally separate, because if I'm employed by the sheriff's office, then if they came into the sheriff's office, obviously they're allowed there," he said, according to WATE. "You understand what I'm saying? This. I am over this. I am the head of this church. I say who comes and goes. Those people are not permitted to join, those people are not permitted to attend."

"When any potential witness in a criminal proceeding expresses an opinion of hatred and/or bias towards a class of citizens, I am ethically bound to explore that witness' credibility," Allen said. "Accordingly, I am reviewing all pending cases involving Mr. Fritts to scrutinize them for any potential bias. Although my office has never received a complaint regarding Mr. Fritts prior to this incident, I have assigned an assistant district attorney to receive complaints regarding closed cases, and I will act on those complaints as justice dictates."

It's not clear what kinds of cases Fritts investigated. When contacted by CNN, the Sheriff's Office would not comment. CNN affiliate WATE reported that Knox County Sheriff Tom Spangler said Fritts had taken a buyout recently and is on paid sick leave until the workforce reduction takes effect on July 19.

"I want to be very clear that it is my responsibility to ensure equal protection to ALL citizens of Knox County, Tennessee under the law, my oath and the United States Constitution without discrimination or hesitation. Rest assured that I have and will continue to do so," Spangler said in a statement, according to WATE.

Spangler told the Knoxville News Sentinel on Friday that Fritts will not be fired over possible lawsuits based on First Amendment grounds.

"We looked at every avenue we could look at without violating anybody's First Amendment rights (and) freedom of speech and the best thing for us was what we did," he said. "And that's what we're sticking with."

The church Fritts leads operates out of a storefront in Knoxville. WATE attended a service on June 12 and reported 16 people attended.

The All Scripture Baptist Church website says it is "an independent, fundamental, King James Bible only, soul-winning church. Don't expect anything liberal, watered down, or contemporary here."

The website is clear about the church's stance on the gay community:

"We believe that sodomy (homosexuality) is a sin that is against nature. A person will only burn in their lust toward the same gender if they have been given over to a reprobate or rejected mind. God said homosexuality should be punished with the death penalty, as set forth in Leviticus 20:13. No homosexual will be allowed to attend or join All Scripture Baptist Church."

In the sermon that night, Fritts said he's not an outlier about LGBTQ rights.

"I am outraged at the statements by Knox County Sheriff's Detective Grayson Fritts," Knoxville Mayor Madeline Rogero said in a statement posted on the city's website. "Fritts' statements raise concerns locally and nationally about protecting LGBTQ+ rights and equality. Fritts' statements have cast a negative light on our community making it imperative to share my personal position and the position of the City of Knoxville."

"Mr. Fritts is not my employee so I can only give my personal thoughts on the issue," Jacobs said. "I find his comments to be extremely vile and reprehensible and I strongly condemn threats of or calls for violence."