Sumo, golf and barbecue: Trump and Abe bond after a tweet underscored divides 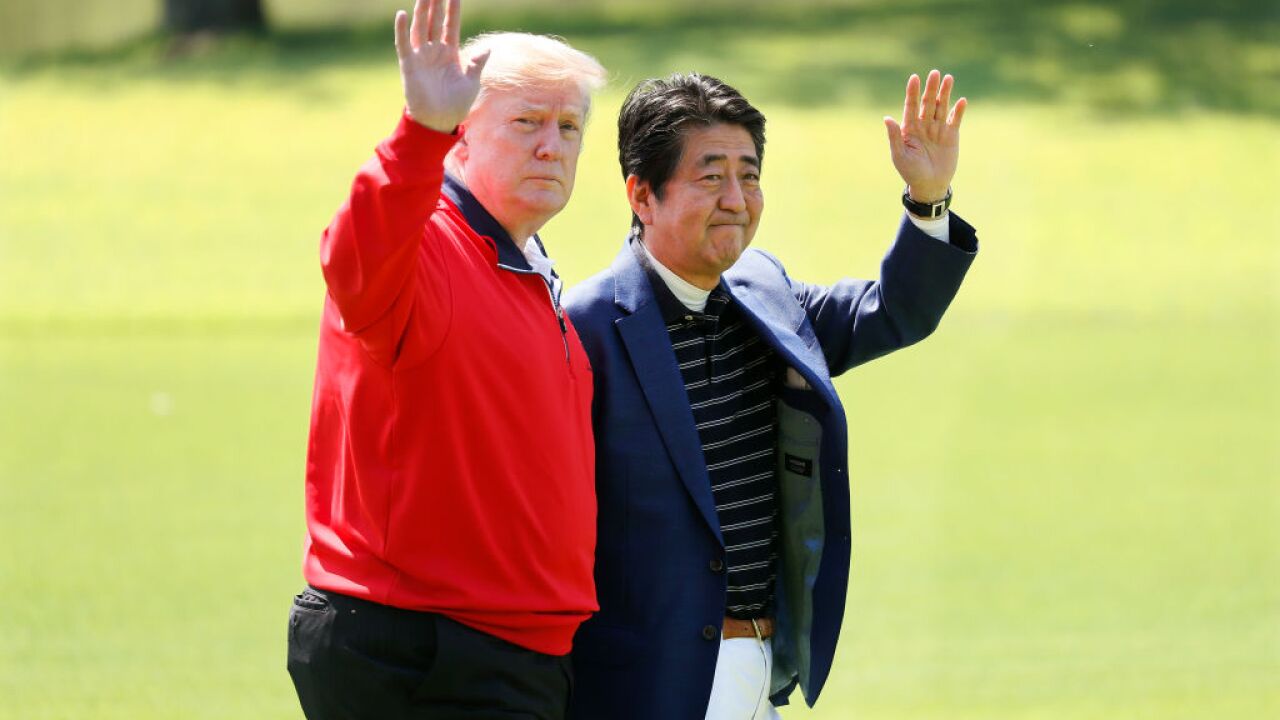 A sunny round of golf, double hamburgers for lunch, ringside seats at a sumo wrestling "basho" and a barbecue dinner. Those were the components Sunday of Japanese Prime Minister Shinzo Abe's latest bid to become President Donald Trump's best global friend.

Whether the hours of male bonding result in wins on trade and security remains to be seen. Before the day even began, there were signs the ardent effort at cultivating the US leader -- started even before he assumed office -- had not paid off in new agreement on North Korea.

Still, the lavish displays of camaraderie clearly suited Trump, who was pictured at the Mobara Country Club south of Tokyo smiling broadly in a selfie taken by Abe as they played 16 holes and sat together for both breakfast and lunch (double cheeseburgers made from American beef, according to Japan's foreign ministry).

And he relished presenting the gleaming, oversized President's Cup trophy topped with a spread-winged eagle -- which he said he purchased himself -- at a sumo wresting tournament, or basho, in Tokyo. He was seated on a small chair during several bouts, watching with interest as the loin-clothed wrestlers brawled.

Later, Trump and first lady Melania Trump joined Abe and his wife at a barbecue restaurant for grilled chicken, Wagyu beef and vanilla ice cream -- the venue selected with Trump's penchant for red meat in mind.

"The prime minister and I talked lot today about trade and military and various other things. I think we had a very productive day," Trump said at the start of the dinner after being handed his first course on a long wooden paddle.

It was all meant to maintain the close personal ties Abe has developed with Trump in pursuit of a smooth and beneficial relationship between Washington and Tokyo.

But an episode earlier in the day highlighted the challenges that Abe faces in cultivating an ally in Trump, whose deeply personal view of diplomacy has led to ample displays of friendship that sometimes fail to yield results.

Trump tweeted -- as he prepared for his round of golf with Abe -- that he doesn't view North Korea's recent short range missile tests as disturbing, a view deeply at odds with his Japanese hosts and in conflict with statements made a day earlier by his national security adviser.

"North Korea fired off some small weapons, which disturbed some of my people, and others, but not me," Trump wrote on Twitter.

The Japanese government has said North Korea's recent test of short range missiles violated UN resolutions -- a determination that national security adviser, John Bolton, agreed with in Tokyo on Saturday during a briefing with reporters.

Trump, who has chafed in recent weeks at what he views as an overly hawkish approach from Bolton, signaled he was more intent on preserving his relationship with Kim Jong Un.

"I have confidence that Chairman Kim will keep his promise to me," Trump said in his tweet before taking a swipe at former Vice President and Democratic presidential candidate Joe Biden.

It was a startling start to what was meant to be an ostentatious display of US-Japan unity, orchestrated by a prime minister whose stabs at becoming Trump's closest global ally are bound by few limits of enthusiasm or taste.

There were the gold-plated golf clubs he presented the newly-elected Trump during a visit to his Manhattan tower in November 2016. There were the white baseball caps he embroidered with gold -- "Donald and Shinzo: Make Alliance Great Again" -- to wear over a lunch of hamburgers a year later. There was the rumored nomination for a Nobel Peace Prize, an episode still vague in detail but not denied by the Japanese government.

And this week, there is the royal pageantry of a state visit, the first for Japan's newly enthroned emperor.

Whether any of that has helped Abe cultivate Trump into anything more than a friend is unclear. What is certain, however, is the example he set early on for his fellow world leaders hoping to make inroads with an untested and unpredictable president. His model of conspicuous flattery has been mimicked by leaders across the globe, though few have carried out the task with as much gusto as the Japanese leader.

Their round of golf Sunday was the latest of several outings on the links the men have enjoyed both in Japan and Florida over the past two years.

And the invitation to the finals of the spring sumo wrestling tournament were a hotly anticipated event that had left Japanese fans wondering how the brash and unpredictable US leader would fit in the tradition-bound stadium.

He presented a four-and-a-half foot tall trophy, weighing between 60 and 70 pounds, to the victor, grimacing happily as he hoisted the cup with the help of two other men.

Trump later told reporters he'd paid for the cup himself to avoid questions.

"We bought that beautiful trophy which they'll have hopefully for many hundreds of years," he said.

The trophy presented, Trump and Abe joined their wives for dinner at a traditional charcoal grill restaurant in Tokyo -- an accommodation for a President not always eager to experience his host country's more exotic offerings (Abe took Trump's predecessor, Barack Obama, to what is regarded as the best sushi restaurant in the world, Sukiyabashi Jiro).

It was an entire day of face time with Trump for Abe, who is eager to diffuse trade tensions while also ensuring the US remains committed to pressuring North Korea on its nuclear weapons and missile programs. The two men will meet more formally on Monday after participating in royal events with the new emperor -- bringing the times they have spoken by phone or met in person north of 40.

For Abe, a strategy of cultivating Trump has drawn some criticism and even light mockery. And though Trump himself is not popular in Japan, surveys show most Japanese believe maintaining strong ties to the US is essential, no matter who its president is.

Whether Abe will succeed in converting his warm friendship into trade and security wins remains unknown. Trump, whose view of Japan as an economic rival dates from its boom period in the 1980s, continues to harp on the $68 billion trade deficit with the United States. He's refused Abe's pleas to remove steel and aluminum tariffs on the country. And he's threatening new auto tariffs if a new bilateral trade agreement can't be struck within six months.

Trump tweeted on Sunday that real work on a new trade agreement would have to wait until after parliamentary elections in Japan, due to be held in July.

On security matters, too, Japanese officials have felt rattled by Trump. His diplomatic opening with North Korean dictator Kim Jong Un caused concern in neighboring Japan, where the threat of missiles is far more potent than on the US mainland. Japan has pressed Trump to maintain pressure on Pyongyang, and has eyed the budding friendship between Trump and Kim warily -- particularly because a number of Japanese citizens were abducted by the North Korean regime decades ago, an issue Abe has pressed Trump to raise with Kim during their summits.

According to White House officials, those issues would be under discussion during this week's visit to Japan. But they were expected to play only a supporting role to the main ceremonial events of the week.

Trump, who was briefed by Abe on some of the visit's details during a visit to Washington last month, has been hotly anticipating the pageantry, according to officials. He told reporters as he was preparing to leave he would be witnessing "something that hasn't happened in over 200 years," though didn't specify what he meant.

When Abe told him the sumo wrestling tournament would be bigger than the Super Bowl, Trump couldn't refuse.

"I said, 'I'll be there. If that's the case, I'll be there,'" Trump said in the Oval Office during Abe's visit.

It's a model that other world leaders have utilized to varying levels of success on a President highly susceptible to extravagant displays of flattery.

During a first stop abroad in Saudi Arabia two years ago, Trump was treated to a royal sword dancing display and a now-mocked ceremony involving a glowing orb. His relationship with Riyadh appears stronger than ever, despite its concerning human rights record and involvement in the murder of an American journalist.

The US' strongest ally has found the flattery route somewhat harder to execute. A state visit to the United Kingdom had been an on-and-off affair for nearly two years after Prime Minister Theresa May came to the White House to extend the invitation.

It will finally come to fruition next week -- and the royal welcome from Queen Elizabeth will be met with expected protests. May, meanwhile, has announced she'll resign from office days later.