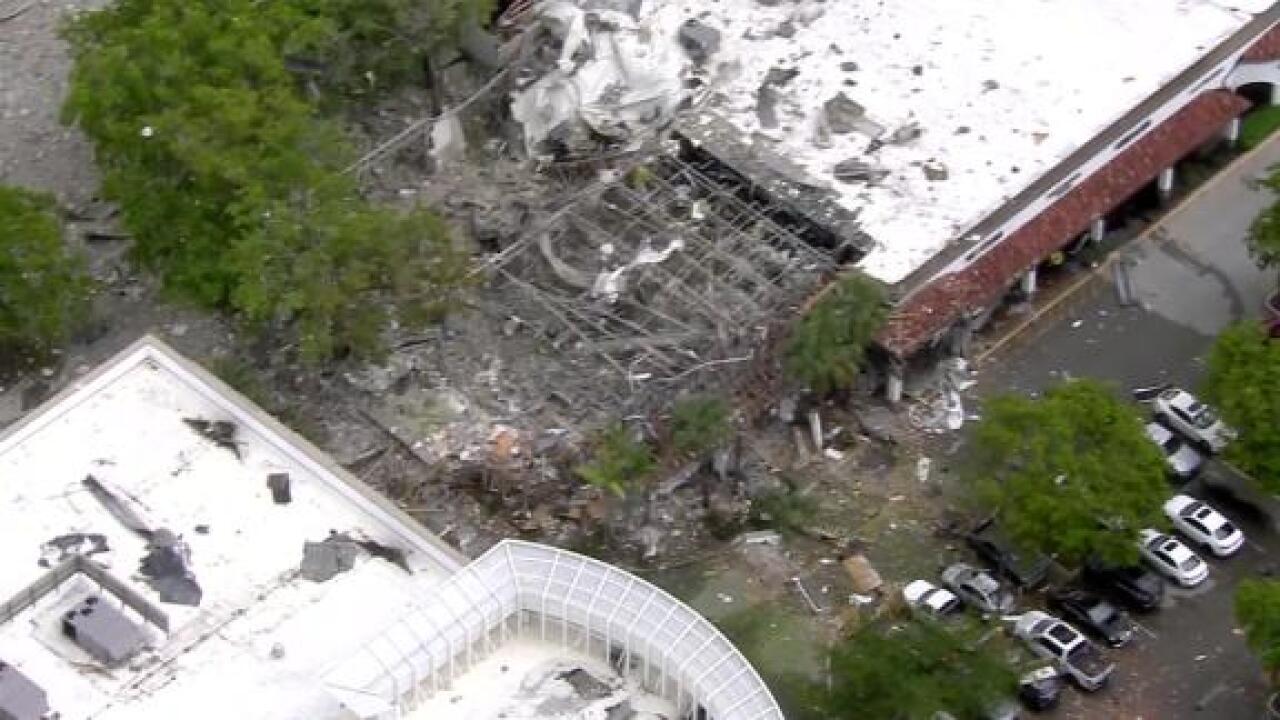 Jesse Walaschek says 15 to 20 seconds saved him and his family.

The 41-year-old, his wife and three kids -- ages 8, 6 and 4 -- had just left a fitness center at a shopping mall in the South Florida city of Plantation when a possible gas explosion Saturday shattered parts of the building, injuring at least 23 people, including two with serious injuries.

"We felt the loudest boom that you could possibly feel. I looked in my rear view mirror and it was just a dust cloud," Walaschek told CNN. "Had we walked out of that gym 15 seconds later, I would've been getting my kids in the car when it went off. I probably wouldn't be here, my kids wouldn't be here."

A search of the blast zone has been completed, police said. There were no fatalities and all the victims have been located, Plantation Fire Deputy Chief Joel Gordon told reporters during a Saturday afternoon press conference.

All the injured were taken to area hospitals, he said. Among the injured was a child, but the injuries were not classified as serious, Gordon said.

"We're relieved that considering the debris field and considering how we found the patients and where we found them, the injuries are not as severe as we would've thought they would be. So we're very thankful for that," Gordon said.

The blast appeared to have occurred in a corner of the mall complex where two buildings intersect.

News footage and social media video showed firefighters arriving at the mall, where windows were blown out of an LA Fitness and the facade of a pizza restaurant appeared to be blown out. A section of the complex appeared to sustain significant damage, with shattered windows and scattered debris.

Walaschek was driving said while he is thankful they made it out safely, he worried about other families at the gym.

"Thing that was on my mind actually was the 20 to 25 children we saw in the children's area when we left," he said.

Alex Carver, who works at a deli across the street from where the explosion occurred, said he and his colleagues initially thought the sound was thunder.

"Then we felt the building shake and things started falling. I looked outside and it was almost like the world was ending," Carver, told CNN affiliate WFOR-TV . "It was nuts, man. It was crazy."

Some business in the blast zone were destroyed. One of those locations was Code Ninjas, a company that teaches children how to code. The business released a statement saying its center was "completely destroyed" and will be closed until further notice.

"Thankfully, we had closed for the holiday weekend, so none of our ninjas, their families, directors, or Code Senseis were in the center at the time," the statement read.

Pediatrician Amanda Buscemi told CNN affiliate WPLG-TV her office was destroyed in the blast as well. Her office was closed at the time of the explosion.

"It's just unbelievable," she said. "We just cry and cry, you know? But, at the same time, we're just so grateful that no one's hurt. This is our baby, where we see our babies."

Buscemi told WPLG she found her diploma in the street when she went to check on the building.

Authorities working to confirm cause of explosion

The Plantation Fire Department initially said a gas explosion had occurred, but later said they were still working to confirm the cause.

Plantation Fire Deputy Chief Joel Gordon said there was an active gas leak at the scene when firefighters responded to the report of an explosion at about 11:30 a.m. ET.

"At this point, we have not actually confirmed that it was an explosion due to gas," Gordon said. "We believe that. That's what it appears to be."

Gordon told CNN the access road to the mall was covered in debris when firefighters arrived. Gas lines in the mall had to be secured before first responders encountered the victims scattered throughout the complex.

"We also have patients that wandered away and came back again," he said.

Plantation police tweeted: "All stores and businesses in the area of the Fountains Plaza and the Plantation Marketplace plaza near LA Fitness will be shut down until further notice until Fire Personnel can determine that it is safe to return. Please do not come into this area if possible."

Gordon said a reunification center was opened at Plantation Central Park Gymnasium for family members looking for their relatives and for details about businesses affected.

The state fire marshal, other local agencies and the federal Bureau of Alcohol, Tobacco, Firearms and Explosives are investigating the cause.