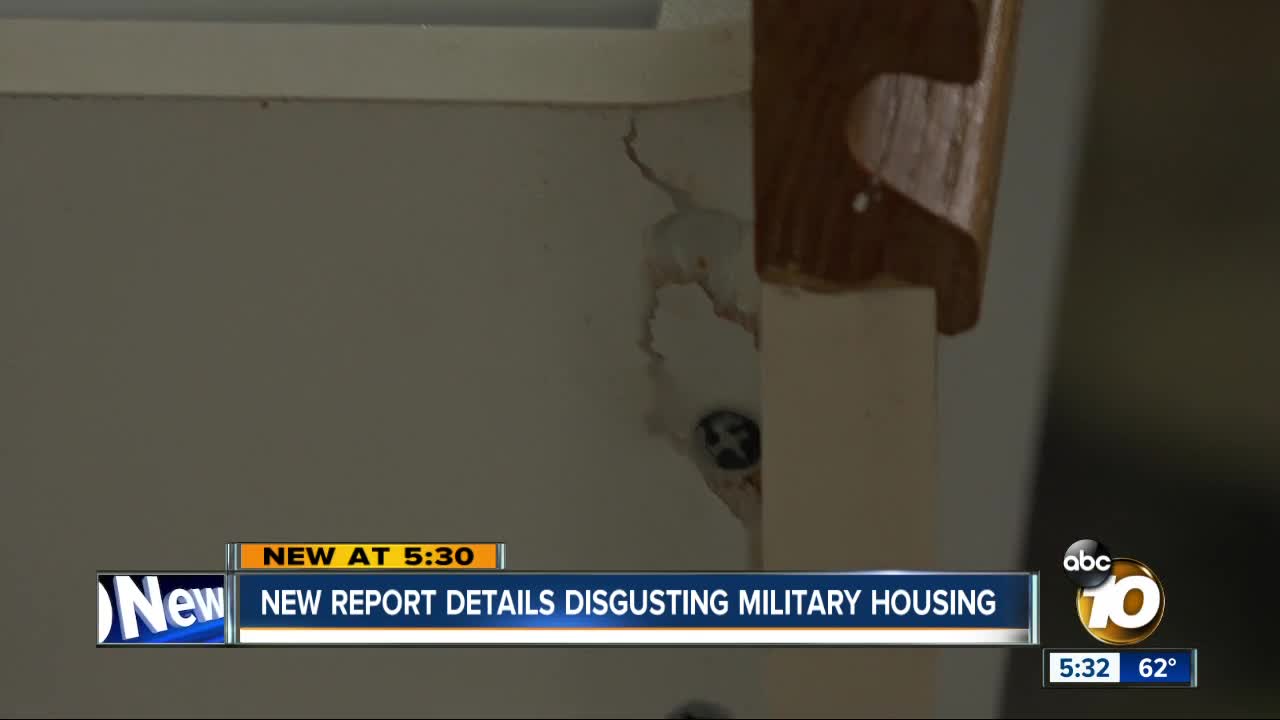 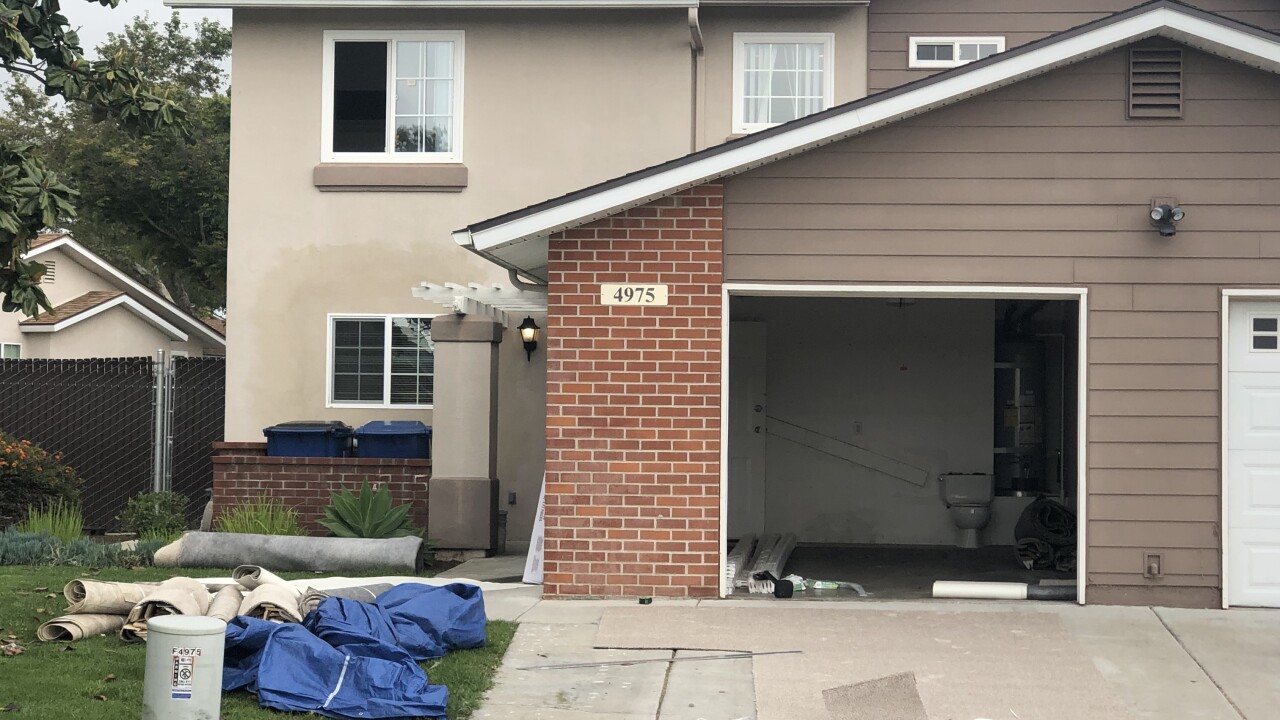 In Murphy Canyon, the issues range from mice, to dry rot to rust. Shelby Stevens' husband is in the Navy, and they've been stationed in San Diego for three years.

On the porch she pointed out what looked like half painted pergolas and said they were full of dry rot. Inside there is no microwave, and the kitchen was much the same as it was originally in the 1990's.

"We've got ant problems, roaches, mice," Stevens showed 10News her shed in the back yard. Inside there's half a dozen mice traps, with little black dots covering the floor. Stevens says those are mice droppings.

On her phone, an image of a dead mouse, she said her dog killed.

These issues echoed throughout the military community.

A woman who didn't wish to be identified, for fear of retaliation, said her closet door had loose rusted screws she had to keep out of her toddlers' reach. She said the repair work on a clogged toilet was shoddy, saying the men left mold, and poop around the base of the toilet.

The new report by the Military Family Advisory Network breaks down the problems renters face by base. For San Diego military families, the top two issues are maintenance and mold.

"We absolutely know that the nearly 17,000 who responded to our questionnaire, this is their reality," Shannon Razsadin, Executive Director of MFAN, said.

The survey went out last January and ran for a week. Razsadin hopes the report gives military families a tool to create change.

The military moms who spoke with 10News say it's not a complete picture of what they're dealing with. Stevens said 17,000 people across the country is a very small part of the military community as a whole.

She said in the last several months their service has declined.

Her sense of despair growing, "these are the kinds of conditions we're living in," she said tearing up.

The women said they pay more than $3,000 a month and say the high cost of living is what keeps them in the military housing.

10News reached out to Lincoln MIlitary Housing and recieved a comment Thursday morning:

"The results of this online poll of less than eight percent of residents is in sharp contrast to the thousands of independent surveys that a majority of Lincoln residents completed in 2018 that consistently showed high satisfaction. Still, we are striving to ensure that all military families are pleased and are implementing a host of substantive measures to improve property management services across our portfolio including:

We created another oversight position, directly accountable to residents, exclusively to ensure that every home is high quality. Feedback about this new position from residents has been extremely positive.
We have met personally with many families and their advocates to hear their concerns and their suggestions for improvements, including the Military Officers Association of America and the National Military Family Association.
We have expanded Resident Advisory Boards across our portfolio. We have built and now offer to residents a mobile app to make it easier for them to place and track all service requests (available in the app store as "RentCAFE,"soon to be renamed “Lincoln Military Resident). Residents can also see all previous work orders they have submitted.
We have increased our staffing to better respond to resident requests and work orders.
In an effort to increase communication, resident liaisons are reaching out daily to residents with open work orders to gauge satisfaction and troubleshoot any concerns.
We adjusted our survey process to provide a work order survey delivered the same day a work order is completed. Those results are then shared with our government partner to give them insight and strengthen oversight.
To allow more opportunity for feedback, we have added the option for residents to submit an anonymous service survey at LMHSERVICE.com. This is in addition to move-in surveys, work order surveys and move-out surveys that residents complete after each process.
We have instituted a door-to-door outreach program where our employees, on a daily basis, connect with residents to gauge satisfaction with their homes. We have already reached over 1,500 families and we will be knocking on every door at least once every three months going forward. If a resident is not home, an invitation letter is left asking them to reach out to Lincoln service staff with any concerns or suggestions.
We retained a third-party mold remediation expert to review our protocols and procedures to ensure best practices and customer satisfaction and have provided a copy of their report to interested officials and our military service partners
Our maintenance staff, technicians and outside contractors are all required to meet industry standards for training, education, licensing and accreditation for the particular services they provide.
Each Lincoln maintenance employee is required to pass a rigorous mold training course led by qualified mold instructors on an annual basis, and new employees are required to take the training within the first week of their employment.If a certain mold situation requires it, higher-level mold professionals and/or industrial hygienists are retained to conduct the remediation process and ensure the issue has been addressed properly.If contractors or maintenance employees do not perform according to our high standards either for the quality of work they provide or the way in which they treat customers, they are dismissed or removed from our provider lists.
In addition to working with the Department of Defense on permanent improvements to the current dispute resolution process, Lincoln is working individually to establish a formal and independent dispute resolution system that will use professional mediators to help resolve any disputes expeditiously and fairly.
“We realize that none of these actions can make up for any past shortcomings, but they demonstrate our good faith effort to make things better. And these are just a few of the many actions we’ve taken and will continue to take in the months ahead.”