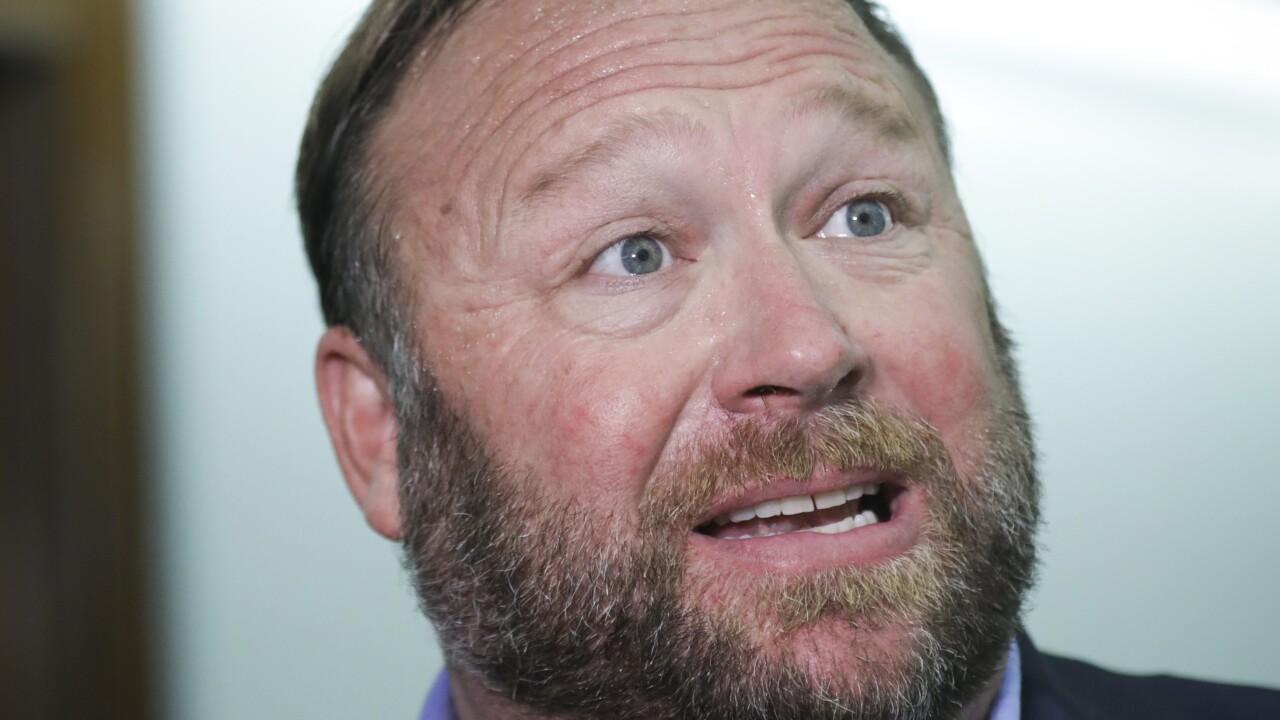 A new court document submitted last week in a lawsuit filed by Sandy Hook families against right-wing conspiracy theorist Alex Jones sheds light on some of the inner workings of Infowars, the fringe and fairly opaque media company Jones operates.

The document, which was filed in a Connecticut court on Wednesday, includes depositions taken in May from four employees of Free Speech Systems, the parent company of Infowars. One of the associates deposed is Jones' father, Dr. David Jones, who is the manager of human resources at Free Speech Systems.

The depositions emphasized how lucrative it has been for Jones to sell products in his online store, and offered a glimpse into how being banned by social media companies like Facebook and Twitter has affected the business. The depositions also painted Infowars as an organization run entirely by Jones.

Jones, who had said the Sandy Hook school shooting was staged, is being sued for defamation by the families of victims in both Texas and Connecticut courts. In a separate sworn deposition taken earlier this year as part of the Texas lawsuit, Jones conceded the shooting was real, and said it was a "form of psychosis" that caused him at the time to believe it was staged.

Jones has for years used the Infowars website and his national radio show to peddle conspiracy theories, suggesting to his audience that the end of civilization is near. He's then used these platforms to hawk survival gear, nutritional supplements and other products as the solution to the problems he describes on his show.

However, little is known about the internal workings and financials of Infowars and its Texas-based parent company.

The lawsuit filed in Connecticut previously alleged that Jones and his company "concoct elaborate and false paranoia-tinged conspiracy theories because it moves product and they make money" and "not because they truly believe what they are saying, but rather because it increases profits."

To that end, much of the discussion in the depositions are centered around the plaintiffs' efforts to understand how Infowars operates as a business, with Jones' associates being questioned on web analytics data and the business model of the right-wing organization.

"There is a business plan but it's in Alex Jones' head," Jones' father said, when asked if a written business plan existed for the company.

"Is there a written business plan?" the plaintiffs' lawyer asked again.

"No, probably not," Jones' father replied.

Later in the deposition, Jones' father estimated "something like 80 percent" of Free Speech Systems' revenue was "probably" from InfoWars store sales. He said that when sales jump, they will later try to "emulate [the] spikes" by revisiting what Jones said on that day of his show.

Jones' father boasted that Infowars customers "are so loyal to us" that "if we say something is good for you and a good value they're going to buy it and a lot of it."

In fact, Jones' father said that Infowars retained a lot of its customers even after the company was banned in 2018 by nearly every social media company for violating their policies.

"One of the strange things that occurred is when we were de-platformed everybody thought we would go away but many of those core and loyal customers were customers of ours before they even knew what the Internet was, basically," Jones' father said. "So they either use telephone numbers or knew what our email address was or whatever so they could do it."

That said, Jones' father also acknowledged that "de-platforming has hurt" the company "with acquisition of new customers."

Timothy Fruge, the Free Speech Systems business operations manager, was also deposed and suggested that Facebook -- along with the conservative news website the Drudge Report -- had been one of the top referring sites for Infowars over the last few years, prior to being banned from the platform.

Robert Dew, the "Infowars Nightly News" director, was also questioned about the mechanics of Infowars during his deposition.

When asked if he considered himself to be "in charge of all news media and social media" for the company, Dew said no.

"I think Alex Jones is ultimately in charge of everything," Dew said.

"Everything goes through Alex," Dew later added. "You show Alex stuff and he goes all right and he decides whether he's going to put it on air or not."

Dew said that Infowars staff members provide Jones with news articles about an hour before his show goes on air.

"He looks at the articles and then I guess he decides what he's going to go over and so the crew's job is to kind of keep up with what he's presenting," Dew said.

At one point, the plantiffs' lawyer asked Dew if a signal is provided to Jones to alert him that "it's time to promote a product."

"Does anybody?" the platiffs' lawyer asked.