Washington couple volunteers to have whale decompose on property 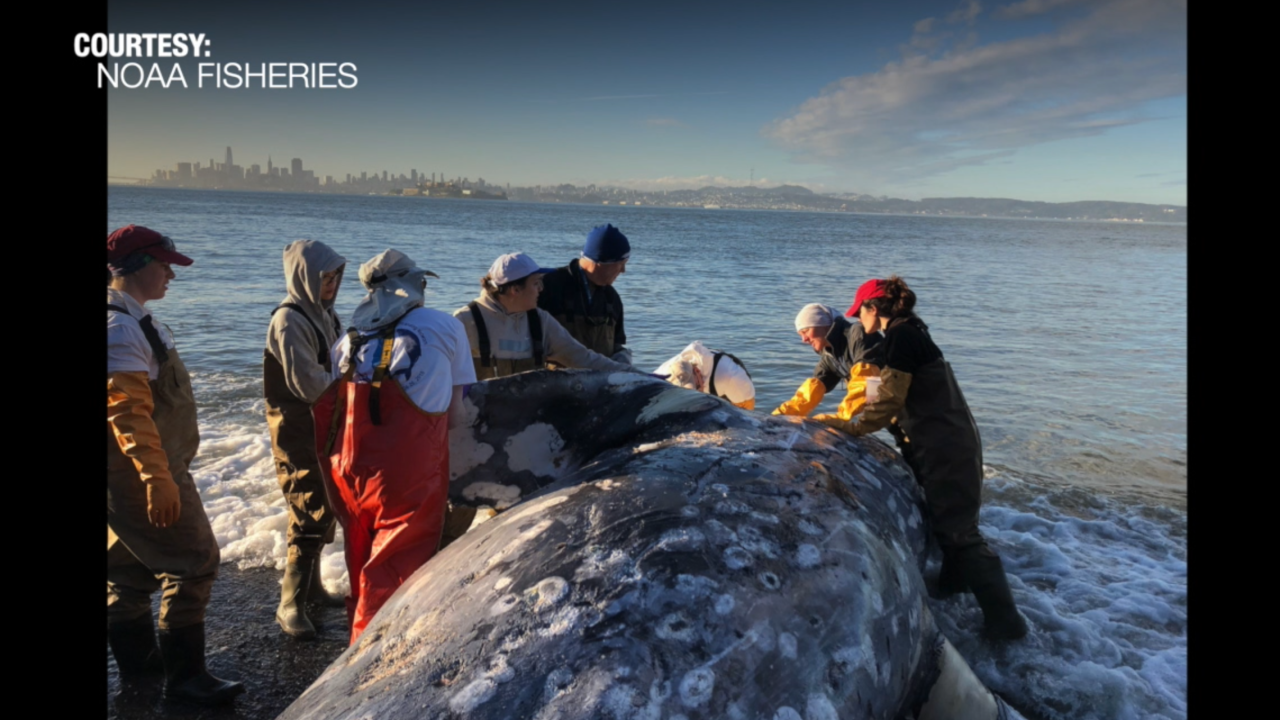 In a town on the Puget Sound of Washington, Mario Rivera makes his way down to the secluded beach in his backyard.

Rivera walks along the beach to an adult male gray whale decomposing on his property.

"40 feet long… we named it Gunther," Rivera says, pointing to the rotting whale.

Gunther is one of 30 gray whales that have washed up dead on the shores of Washington so far this year. If you include Alaska, Oregon and California, that number jumps to 81 and counting.

The National Oceanic and Atmospheric Administration is calling the phenomenon an unusual mortality event, and there's simply not enough storage space for these massive decomposing animals.

"This whale got stranded about three or four miles down there," Rivera explains.

Homeowners in the area weren't too happy about where Gunther landed naturally, so the Marine Mammal Stranding Network had to find somewhere else to designate as his final resting place.

"My wife and I just looked at each other and said 'Hey, let's take it to our property,'" Rivera says.

With permission from their one neighbor, Rivera and his wife were the first to volunteer their property as a place for the whale to decompose.

They were the start of a movement as NOAA says 15 more have volunteered since. It's an unexpected response considering the scent of a decomposing whale is far from pleasant.

He says the stench comes and goes with the hot temps and wind, but he's been covering it in lime to help, and he says the pungent smell will likely go away after a month. What's more important, is that Gunther has given Rivera and scientists an opportunity to study why so many whales may be dying.

"When we opened him up, we found nothing but eel grass. And eel grass isn't part of their diet. This whale was what we call desperation feeding," Rivera says.

John Calambokidis has been studying whales along the West Coast for 35 years. He's a research biologist with Cascadia Research. Calambokidis says the malnourished state of Gunther was very similar to what they've been seeing with other dying whales.

"Most of these whales have shown up very thin and emaciated--very little oil or fat in their blubber layer, which suggests they didn't get enough to feed last year," Calambokidis says.

Gray whales spend the summers feeding in the Arctic and then migrate south near Mexico for the winter. All the whale strandings show some aren't making it through their normal seasonal fasting as they migrate back north along the West Coast in the spring.

Calambokidis says it still isn't 100 percent clear why so many whales are dying, but he thinks its at least due in part to food supply not being able to meet the demand of the West Coast's growing whale population.

"Most recent estimate was 27,000 gray whales in this population," Calambokidis says.

Research biologists have seen this trend once before back in 1999 and 2000. The theories were the same, and gray whales have made a comeback in the following decades. But now, scientists are questioning whether warming waters is also playing a role.

"We're not yet alarmed about this in the sense that we've seen something like this before and they've recovered from it. But we really do want to understand what's going on," Calambokidis says. "Particularly since there have been such dramatic changes in the arctic ecosystem. Making sure there isn't also a climate change element to this that could suggest a longer-term pattern we need to be more concerned about."

According to Calambokidis, waters are warmer, and ice cover has dramatically been reduced, changing the dynamics of the ecosystem and how whales reach their prey.

Part of their job as research biologists is to learn if there's more to the story. Calambokidis says they study each carcass searching the tissues for disease or contaminants. But for now, the main issue is dealing with the abundance of dead whales. And Rivera is happy he's been a part of the solution.

"This one couple volunteering this has prompted NOAA to think well maybe there are other people that would be interested in this, and [they can] kind of explore this as a new direction," Calambokidis says.

If you'd like to reach out to the journalist of this story, email elizabeth.ruiz@scripps.com