Look out, Gulf Coast residents: You may be hit with the first tropical system of the season 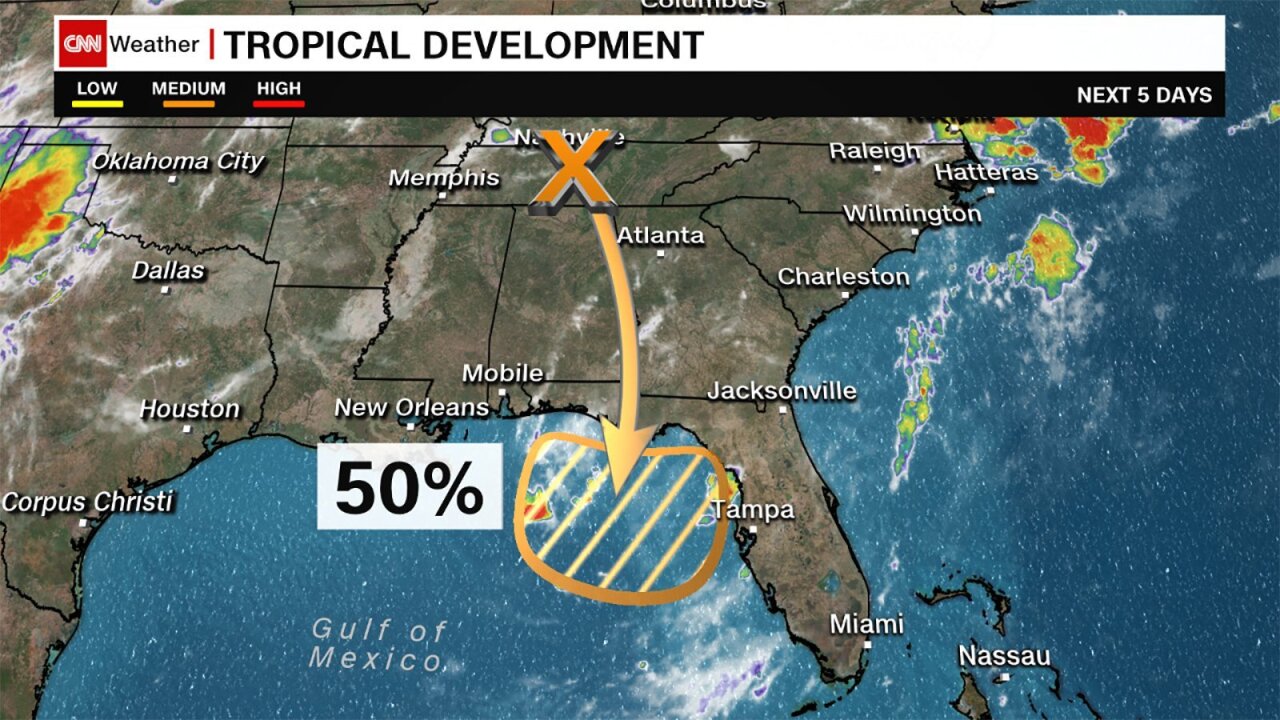 It's looking more and more likely that the United States soon could face its first tropical threat in the young 2019 hurricane season.

On Sunday, the National Hurricane Center increased the chance to 50% that a system could develop in the Gulf by the middle of the week. Depending on your computer model of choice, the ensuing system could pose trouble -- or worse -- from the Florida panhandle to southern Louisiana.

While it's still too early to tell if this system will get strong enough to be named (that would be Barry, by the way), more interesting is "how" this could all come about.

For the most part, meteorologists vigilantly scan the Gulf or Atlantic Ocean from June to November for signs that low pressure systems are developing with the potential to strengthen.

Turns out that average date of the first named storm in the Atlantic is July 9 , but the activity storm-watchers will be dialed into this week isn't coming from the sea, but from land.

To get a tropical system, you need warm water, weak steering winds aloft and thunderstorms forming around low pressure. All three ingredients are present.

By early in the week, a sagging front, along which nearly daily thunderstorms have been forming in the Southeast US, will end up in the Gulf.

Remnants of those storms will help develop a low-pressure system in the very warm waters of Florida's "Big Bend" in the Gulf of Mexico. Temperatures there are running in the mid-80s.

A ridge of high pressure has been keeping the Southeast firecracker hot and humid since the holiday and that same feature keeps the upper level winds weak.

Under that heat dome, computer models speculate that the low pressure will begin to form by Wednesday.

The more aggressive European model intensifies the system rapidly to at least tropical storm strength, and keeps the system in the Gulf, drenching western sections of the Sunshine State with torrential rain by the weekend. Then, the system drifts westward with Southern Louisiana in its sights.

The American model, which just underwent a massive upgrade , takes a somewhat different tack. It too generates a system in the northern Gulf by mid-week, but it isn't as strong. Additionally, after meandering for a few days, the system is projected to head inland, drenching the Florida panhandle and southern Georgia.

Keep in mind, both models do their best when the low pressure has actually formed and until then, there will be wild variances in their forecasts. However, at this stage, what we look for most is consistency in trends. Both models have been indicating the overall scenario of low pressure forming in the Gulf, even if the specifics and timing vary a bit.

This is likely one of the reasons why the agency tasked with tracking and forecasting tropical system increased their five-day projection from 20% Saturday to 50-50 Sunday.

So, if you're a Gulf coast resident, what should you do? Nothing now - but stay vigilant. Check in with us as we'll be following this system through the week.

These kinds of systems are especially tricky compared to, say, a menacing, growing swirl easily identifiable in the ocean targeting a coastline. Each tropical threat can bring varying amounts of wind and water, so you need to be prepared either way.