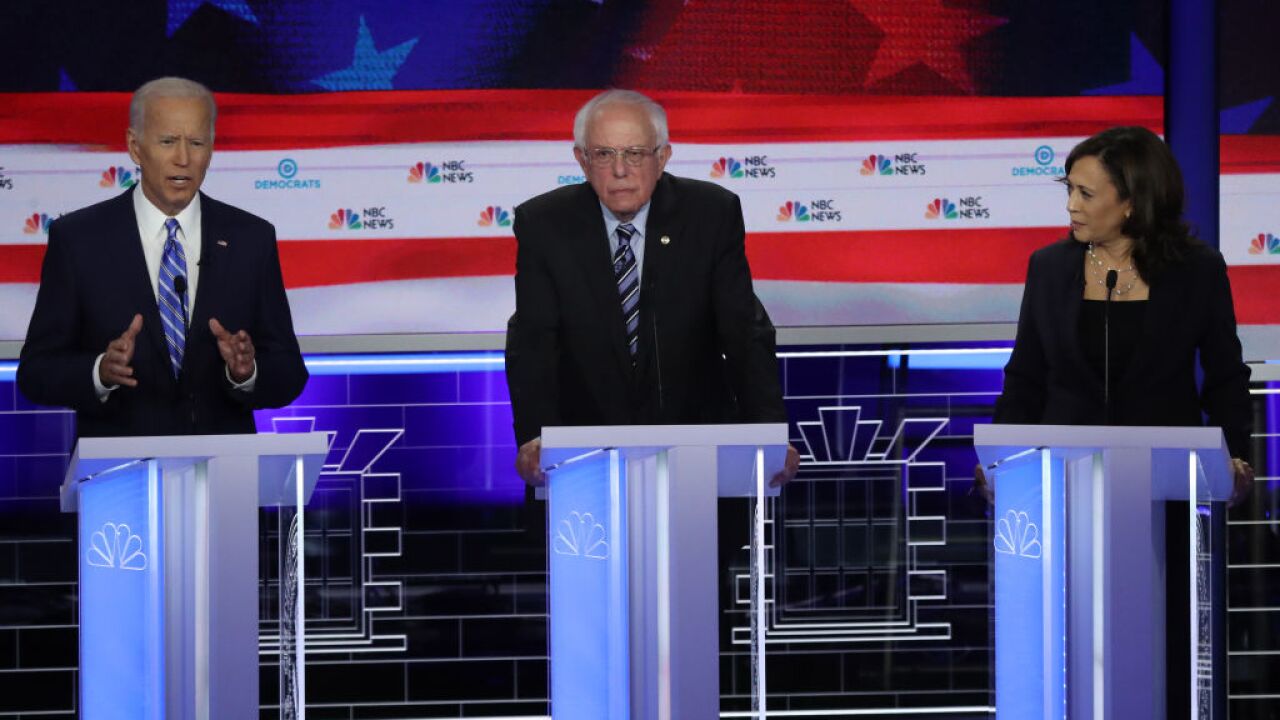 Sens. Kamala Harris and Elizabeth Warren have made steep gains after the first Democratic presidential debate , a new CNN poll conducted by SSRS . shows, with former Vice President Joe Biden's lead over the field shrinking to a narrow 5 points.

The results indicate a significant tightening in the race for the Democratic nomination.

The poll, conducted after the two-night debate, finds 22% of registered voters who are Democrats or Democratic-leaning independents backing Biden for the party's presidential nomination, 17% Harris, 15% Warren and 14% Sen. Bernie Sanders. No one else in the 23-person field tested hits 5%.

That represents a 10-point decline in support for Biden since the last CNN poll in May, while Harris, of California, has posted a 9-point increase, and Warren, of Massachusetts, has boosted her support by 8 points. No other candidates have seen significant movement since the last poll.

Harris' numbers follow a strong showing on the second night of the debates. Among those who watched or followed news coverage about them, 41% say Harris did the best job in the debates, well ahead of the 13% who say Warren had the best performance and 10% who said Biden did. Among those who say they watched all or most of at least one night of debates, Harris' showing is even stronger: 46% say she did the best job, 19% Warren, 8% Biden and 5% each named South Bend, Indiana, Mayor Pete Buttigieg and former secretary of Housing and Urban Development Julian Castro.

And 30% of potential Democratic voters now say Harris is the candidate they most want to hear more about, up from 23% who said the same in April. That figure doesn't include those who say she is their top choice for nominee.

Warren was the lone polling heavyweight on the stage in the first night of the Democratic debates on Wednesday. She turned in a solid performance that served as an introduction to a national audience who may have been hearing from many candidates for the first time.

On Thursday night, Harris and Biden shared the debate stage and faced off in one of the most memorable moments of either night. Harris asked Biden directly about his opposition to federally mandated busing as a means to integrate public schools in the 1970s, and about his comments on working with segregationist politicians during his time in the Senate. The move appears to have worked in her favor.

Harris and Biden are now about even in support among self-identified Democrats, white voters, younger voters, nonwhite women and those who tuned in to watch the debates. She outpaces him significantly among liberals and whites with college degrees. Warren challenges Biden and Sanders among independents, tops Biden and runs even with Harris and Sanders among liberals, and earns similar numbers to Harris among younger voters, whites and whites with college degrees.

Biden tops the rest of the field by a wide margin as the candidate potential Democratic voters see as having the best shot to beat President Donald Trump.

Overall, 43% of potential Democratic voters say Biden has the best chance to beat Trump in 2020, 30 points ahead of his nearest competitor, Bernie Sanders. Further, 6 in 10 potential Democratic voters say it is more important to them that the party nominate a candidate with a strong chance of beating Trump than it is that they nominate someone who shares their views on major issues.

But those voters who prefer a strong shot at beating Trump aren't necessarily committed to Biden: 23% in that group say he's their choice for nominee, with Harris and Warren close behind at 18% each and Sanders the only other candidate in double digits at 10%.

Biden's other clear advantage in the poll is on the issues. More say he's the candidate who can best handle the economy (28%) than name any other contender, and he ties with Sanders as best suited to handle the climate crisis (19%). He's in second on handling health care (18%, behind Sanders' 26%) and on race relations (16%, behind Harris' 29%).

Although Harris tops on race relations, she lands in fourth place on the other issues tested, with just 10% saying she'd do the best job on health care and 6% each on the economy and the climate crisis. Warren, who has made her issue positions a central feature of the campaign, lands in second place on the economy (20% say she'd do the best job handling it) and runs narrowly behind Biden and Sanders on health care (16%) and the climate crisis (14%).

The poll finds most Americans in favor of a national health insurance plan, even if that means taxes go up (56% favor that), and support for such a plan skyrockets among potential Democratic voters (85% back it). But those who favor such a plan are not all on board with it being a total replacement for private insurance. Among all adults, just 21% say they favor national health insurance and that it should completely replace private health insurance. Among potential Democratic voters, just 30% feel that way.

During the second night of debates last week, candidates were asked whether government-run health insurance would be available to undocumented immigrants under their plans, and all onstage that night said it would. Among all Americans, that's a largely unpopular position (59% say that shouldn't happen), but among potential Democratic voters, 6 in 10 favor it (61% vs. 36% who say it should not be available to undocumented immigrants).

The CNN Poll was conducted by SSRS Friday through Sunday among a random national sample of 1,613 adults reached on landlines or cellphones by a live interviewer. Results for the full sample have a margin of sampling error of plus or minus 3.0 percentage points; for the subsample of 656 Democrats and Democratic-leaning independents who are registered to vote, it is 4.7 points.