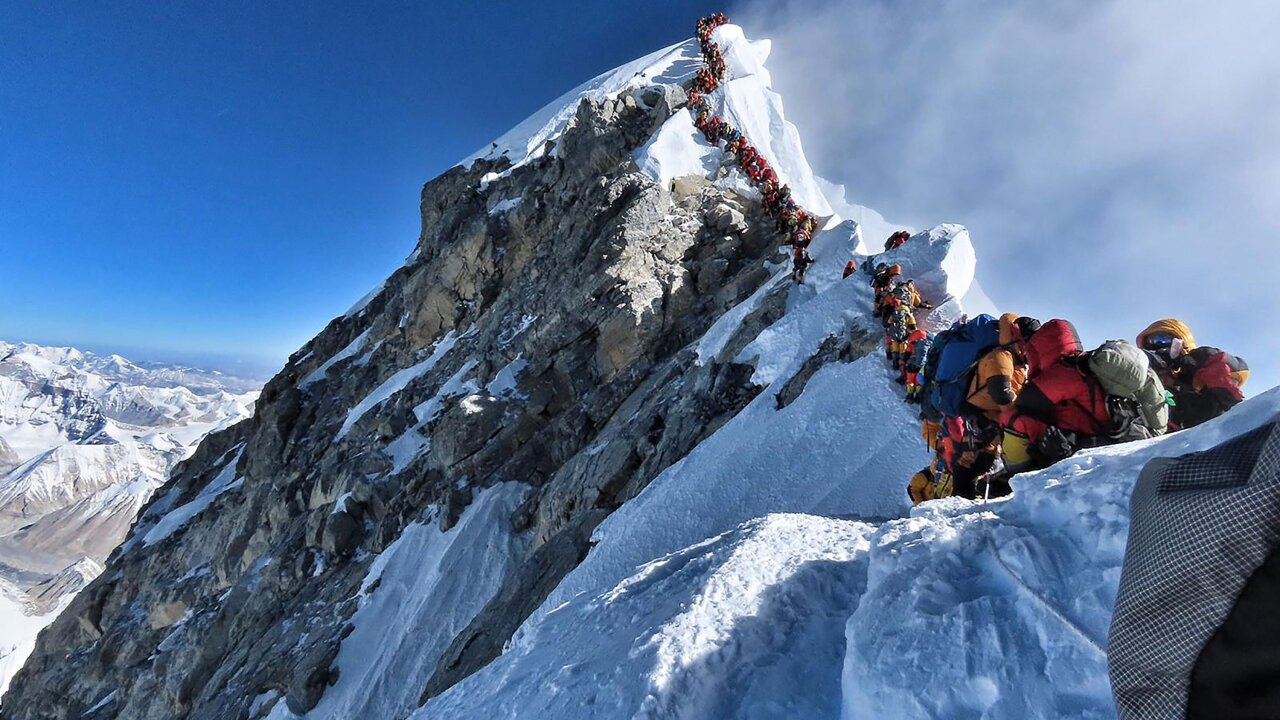 "Happy anniversary, my love. I can't wait to see you again," 34-year-old Ian Stewart told his wife, Katie, as they said their goodbyes at Mount Everest base camp . "I promise I will come back home, that I won't prioritize the summit over my safety."


Robin Haynes Fisher, 44, made a similar pledge to his girlfriend of four years, Kristyn.

The two women had made the trek to base camp with the "mountain men" they loved. Now it was time for them to leave, and for Ian and Robin to turn their focus to the physical and mental challenges of scaling the world's highest peak .

Ian had been training for the past decade and had already climbed the highest mountains on five of the world's seven continents.

"Everest was always this like quasi-mythical childhood dream, I devoured every book I could on the mountain and on those who had gone before me," Ian told CNN. "I was starry-eyed when I got here, I mean I have been thinking about this trip for as long as I can remember."

For the next couple of weeks of the acclimatization period, the men were tentmates, testing themselves by moving between camps at different altitudes.

"Robin was a Brit so he had that traditional British humor," said Ian, who is from Atlanta. They had bonded, the kind of bonding only born on the mountain. "We would watch Kevin Hart standup shows and banter about US and UK politics."

Robin caught a cold at Camp Two, so he went down to Dingboche, a village below base camp, to recover. When Ian went down to give himself a break shortly afterward, the two would catch up over coffee.

They would talk about what motivated them. Robin was an athlete, a marathon runner who had experience climbing at high altitude.

"For Robin it was, 'I am so fortunate to have this opportunity, I would be selling myself short in life not to have a go at it,'" Ian recalled him saying.

Ian then went back up the mountain. He described how precarious and nerve-wracking it all was. The twisted ladders in the icefall, the exhilarating anxiety of being in a tent on a small platform carved into the mountain at Camp Three, but also seeing some of the inexperienced climbers around him.

"We saw lots of examples of people being short-roped in the icefall and dragged up ... and that is just after base camp," he said. "If you can't get through that section you are going to have a rough time up the mountain."

Ian was aware of how crowded the mountain was, but little did he know what that would mean when combined with the short viable weather window this season.

A route marked by bodies

He decided to go for the summit on May 23, the day after a now-viral photograph was taken of the backlog along the ridge to Everest's summit. He waited for the crowds to clear and as he headed out saw people with frostbite getting dragged down by their Sherpas.

"They are screaming and begging their Sherpas, 'Please let me stay and rest for five minutes,' and the Sherpas are like, 'Nope, if you want to have any chance of living and getting evacuated out of here we have got to drag you down all the way to Camp Two where a helicopter can pick you up,'" Ian remembered. "That was sort of a 'wake-up' moment when you re-remembered that this place is no joke."

Ian was able to start out at a decent pace, but then he hit the traffic jam near the summit.

"When you get to the top, part of the problem with the lines is people go to the top and they are coming back down, and it's this very narrow single-file ledge," he explained. "It's difficult to move up because people are also coming down ... and you can't really move while they are coming around you because there is nothing between them and 8,000 feet below."

He describes seeing dead climbers along the way, no less jarring even though he was prepared for it, and watching people not knowing how to clip on and off, being barely able to walk or hold themselves up.

Most climbers take two oxygen tanks. One is used most of the way up the mountain and ends up around half full. This is left at what is called "the balcony" at about 27,500 feet. The other tank is meant to take the climber from this point up to and then back down from the summit, at over 29,000 feet. The levels of oxygen released by the tank are regulated based on the time the final ascent takes, but lessening those can be risky.

Ian had calculated that it would take him eight hours to get to the top, but it eventually took him 12. "The first point of panic really hit me at the summit. I was up there with our guide and he looked at me and said, 'Hey, we are both really low on oxygen, we gotta go.'"

But they got caught in the bottleneck at Hillary Step, an almost vertical rock face close to the summit.

"I was sitting up there with 2.5 hours of oxygen left, sat there for 40-45 minutes and you are just watching time dwindle away," Ian remembers.

"So everyone just queues there and that is when tempers start flaring a little. You hear people scream, 'Mount Everest isn't the place to come learn how to mountain climb,' and the screaming rattles the inexperienced people even more."

It then got even worse -- a storm moved in.

"The howling winds are pelting you with ice and you are seeing people strewn all over the mountain and you are wondering is anyone going to survive," he describes. "I can't believe that more people didn't die. It was like a war scene up there with all the lines and inexperience and shouting and people freaking out with their oxygen running out."

He said was he was filled with gratitude and very lucky that one of the Sherpas in the group brought an extra bottle of oxygen up from the balcony.

"When I got to the end of the descent ... about half an hour away from Camp Four, I just started breaking down crying, just at anger with myself at coming that close to not fulfilling that promise ... so what fueled me was probably shame and embarrassment," he remembered.

Once Ian reached Camp Four, his tent ended up next to Robin's. Robin was a few days behind him and he had posted on Instagram about the crowds, writing, "I am hopeful my decision to go on the 25th will mean fewer people."

At this point, Ian was exhausted and grateful to be alive, while Robin was filled with excited anticipation at the challenge ahead, especially since the crowds had mostly cleared.

"We spoke through the tent for a while, I told him, 'Hey, make sure you eat and drink a lot, it's really difficult with the oxygen mask, you will run out of energy,'" Ian said. Robin asked Ian to tell his girlfriend that he was "in good health ... in good spirits (and) ready to go for the summit."

Ian then headed down the mountain. Back at base camp, he was sitting in his tent about to message Kristyn when the tent manager came in and told him that Robin had died on the mountain .

"I was utterly shocked, disbelief, no way. It just unfathomable to be honest, Robin was more than fit enough to climb the mountain, I couldn't believe it."

What happened to Robin is unclear. Ian says the Sherpa he was with said he just collapsed 100 meters down from the summit. They tried switching his oxygen, reviving him and giving him water, but he was gone.

The death toll on Everest this year has opened a debate about what needs to be done. Many climbers CNN spoke to, including Ian, said that this is due to a combination of factors: the number of permits granted, combined with a lack of experience among climbers, coupled with the weather phenomena.

Nepal's government denies that deaths attributed to inexperience and overcrowding were the result of its permit process. Danduraj Ghimire, director general of the Nepal Tourism Department, blames the weather for causing climbers to rush the summit at the same time, noting that the dangerous traffic jams do not occur every day.

Ghimire said that only nine more permits were issued this season than last year. Each costs about $11,000. While Nepal does not have any experience requirements for climbers purchasing permits, the government is thinking about changing that, he notes.

Ian has spoken to Kristyn every day since Robin's death, and she wants to make sure Robin's climbing gear is donated to the local Sherpa community and to create a memorial for him, along with the other monuments to people claimed by the mountain, on the path to base camp.

Summiting Everest has changed Ian, but not in the way he had always imagined it would.

"It was a dream come true to be here -- you revere this place, this mountain and now having been up it I have this jaded view," he says. "This is a place where real people die, they don't get to live out the rest of their lives, they are chasing a hill."