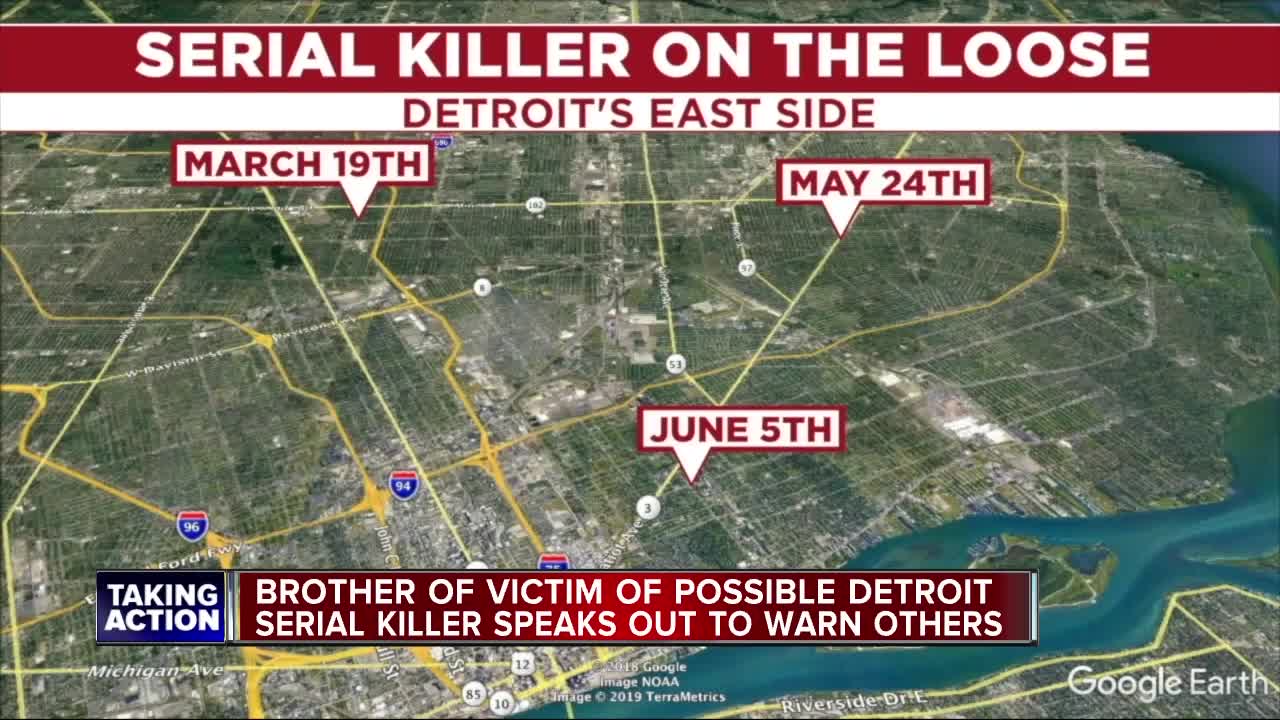 As Detroit police continue looking for a possible serial killer and rapist, the brother of one of the victims is speaking out about his sister's death.

MICHIGAN — Detroit police officers on Friday morning will plan to go house to house, clearing vacant homes on the city's east side after Chief James Craig announced there was a potential serial killer and rapist in that area.

According to Craig, the suspect could be targeting women in the early 50s and luring them to vacant dwellings. Craig also said the suspect is targeting sex workers.

Detroit Mayor Mike Duggan said during a press conference on Friday that 40 neighborhood police officers are going to be deployed in teams of two to clear every open and abandoned home in the next two weeks to make sure they don't have any victims inside.

According to the mayor, after that, the board-up teams will go and board up those homes. There are about 1,000 homes on the city's east side they plan to board up by the end of July.

The mayor also said that they will add a portion of the Improve Detroit app for people to report when someone pulls a board off of a home. For now, they're asking anyone who sees someone pulling a board off the home to call 313-267-4600 to report it and they will come out and board it up right away.

.@MayorMikeDuggan just said only one of three people who are attributed to a serial killer has been ruled a homicide (first victim Nancy Harrison), says @detroitpolice Chief Craig announced a serial killer before a medical examiner ruled all of them as homicices.

#BreakingNews: @MayorMikeDuggan over next 2-3 weeks 40 officers in teams of two will enter every abandoned home in the east side of #Detroit to check for more possible victims. Will then double board up team to close up every home by the end of July. @wxyzdetroit

According to police, the press conference will discuss how officers will be clearing vacant dwellings in the area, and how other city services are working to board up vacant homes.

Craig said they have been in the middle of the investigation which started several months ago, beginning with an incident on March 19 in the 20000 block of Coventry, where the female victim, identified as 52-year-old Nancy Harrison, was totally disrobed. Police say when she was first located, the cause of her death was originally thought to be a drug overdose. However, after further investigation, it was discovered that she suffered blunt force trauma. No further details have been released on her death.

The body of the second victim, Travesene Ellis, was found on May 24 on Linnhurst, between Gratiot and Chalmers on the city's east side.. No further details have been released on her death. She was reported missing on May 15. She was last seen on April 21 in the 13000 block of Linnhurst Street, where her body was later discovered.

Wednesday morning, a woman's decomposed naked body was found inside a vacant home on Mack near Mt. Elliot.

The chief said it wasn't until the murder Wednesday morning that they believe they have the "makings of a serial killer and rapist that's operating on the east side of Detroit."

He believes the suspect is targeting women in their early 50s and luring them to vacant dwellings.

There is no suspect or suspect vehicle description at this time. Although the chief said all three victims are believed to be sex workers,, the family of Harrison say she was not.

The chief also clarified that several weeks ago, there were rumors circulating through social media that there was a serial killer dumping bodies in dumpsters. He said that was incorrect and there was no connection whatsoever.

Police are asking sex workers to come forward with any information.

"We're not here to arrest you, we're going to make sure you're safe," he said.