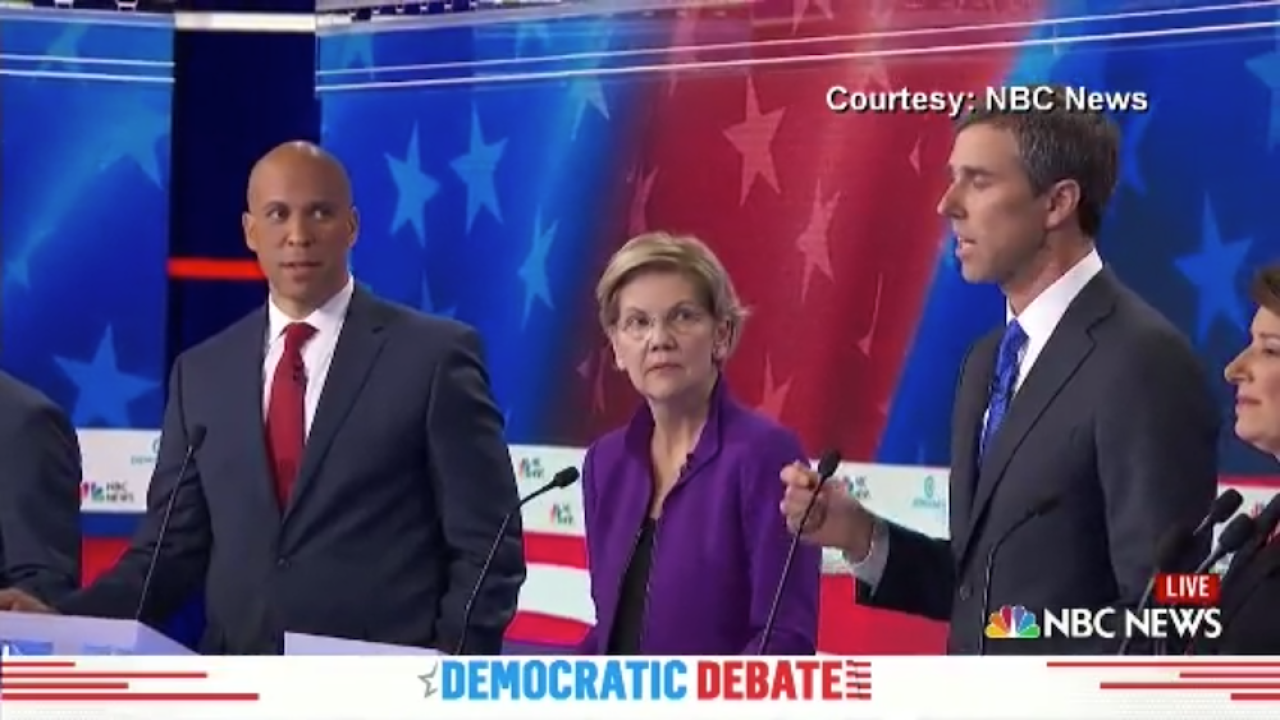 When Beto O'Rourke opened the first Democratic debate by answering a question about tax rates in Spanish, he appeared to get some shade from Sen. Cory Booker.

The New Jersey Democrat initially looked taken aback, impressed or jealous at the power move, which highlighted O'Rourke's ability to speak the language fluently and may have distracted from the fact that he could not or would not answer the specific question about whether he would support a 70% top tax rate.

But maybe Booker was just frustrated that he didn't get to speak Spanish first. He pulled out his own language skills a short time later when the subject turned to immigration.

One of the moderators, José Diaz-Balart, got in on the act as well, asking O'Rourke a question about the border in Spanish before repeating it in English.

After the debate, Rep. Alexandria Ocasio-Cortez called the candidates' answers in Spanish "humorous, sometimes" but said they were "a good gesture to the fact that we are a diverse country."

"I loved it, because I represent the Bronx. There was a lot of Spanglish in the building," the progressive congresswoman from New York told Stephen Colbert on "The Late Show." She also joked that because of the "content of the questions," she thought candidates may declare in Spanish, "I will not give you an answer to your question."

It's larger percentages in some key Democratic states, such as California, which moved its primary to earlier in the process for 2020, and 28.7% of people speak Spanish at home.

In Texas, home to both O'Rourke and former San Antonio Mayor Julián Castro, 29.5% of people speak Spanish at home.

Castro, by the way, has admitted his Spanish skills are not top rate and he rarely spoke the language at home growing up even though his mother is a native speaker. At the end of the debate, he said one line: his name and that he's running for President. In English, he continued that that's the American dream since his grandmother emigrated from Mexico and now one of her grandsons is running for president and his twin brother is in Congress.

O'Rourke learned the language growing up in El Paso, Texas, along the Mexico border. He and Castro tangled at the debate on immigration policy. Castro wants to decriminalize undocumented border crossings.

Booker learned Spanish during a language immersion program in Ecuador. Bill de Blasio, the New York City mayor, did not speak Spanish at the debate, but he can.

But neither O'Rourke's nor Booker's Spanish was flawless.

When asked whether he supported a marginal tax rate of 70% on top earners making more than $10 million a year, O'Rourke began his response in English.

"This economy has got to work for everyone and right now we know that it isn't, and it's going to take all of us coming together to make sure that it does," he said.

He then reverted back to English for the rest of his remarks.

O'Rourke made some notable errors, however. For example, he used masculine adjectives to describe "economy" and "democracy," which are feminine nouns in Spanish and he used the verb "to vote" before correcting himself and using the Spanish word for voter.

When asked what he would do on Day One of his presidency if elected, Booker replied in Spanish, "The situation right now is unacceptable. This president has attacked, has demonized immigrants -- it's unacceptable and I will change this one."

He then switched to English, saying, "On Day One, I will make sure that No. 1, we end the ICE policies and the customs and border policies that are violating the human rights. When people come to this country, they do not leave their human rights at the border."

Booker's Spanish was also imperfect, as he said that he would change "this one" instead of "this."

O'Rourke was also asked the Day One question, although in Spanish, by Diaz-Balart.

"We will treat each person with the respect and dignity that they deserve as humans," he said in Spanish.

Marianne Williamson joked on Twitter that she needs to learn Spanish by Thursday night when the other 10 Democrats who have qualified for this first slate of debates square off.