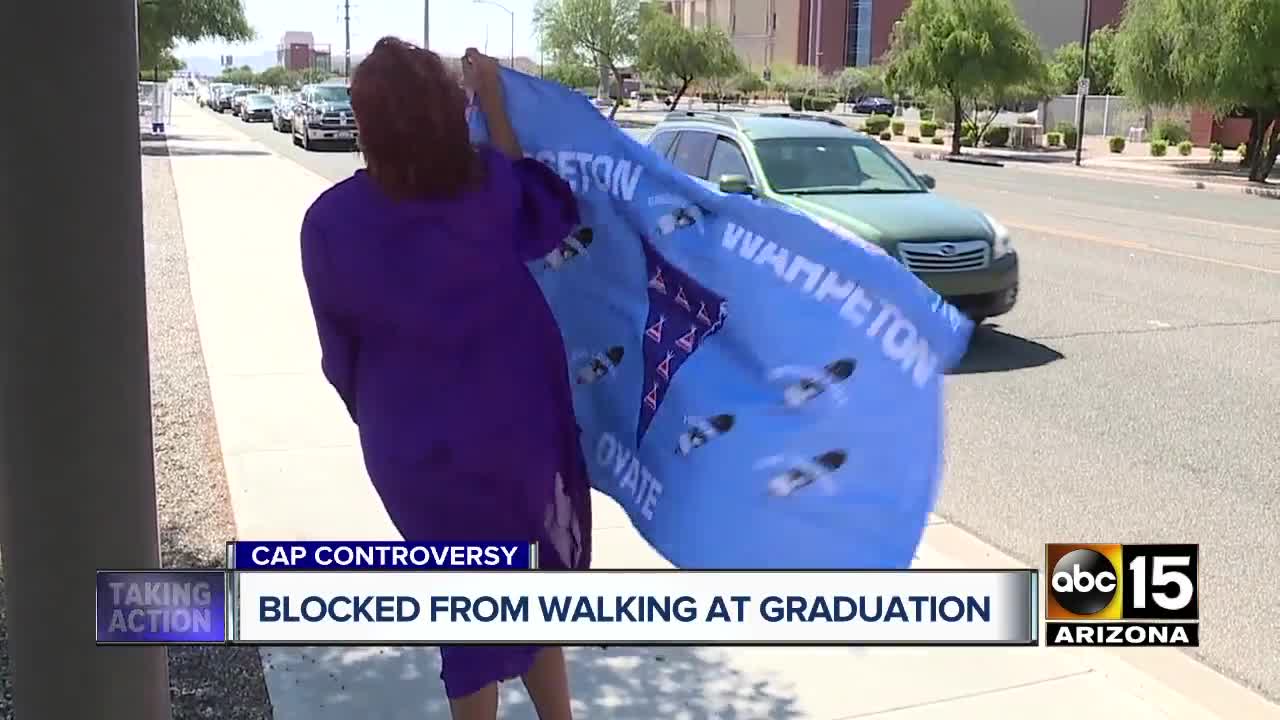 While hundreds of Valley Vista High School seniors walked across the stage for graduation today, one student wasn't even allowed inside the venue. SURPRISE, Ariz. — While hundreds of Valley Vista High School seniors walked across the stage for graduation Thursday, one student wasn't even allowed inside the venue.

LaRissa Waln showed up to her graduation ceremony at State Farm Stadium in Glendale, Arizona, but was stopped at the doorsby her school's vice-principal. Waln was told she'd have to remove her decorated cap, which she had deocrated with Native American patterns and trum, and exchange it for a blank one.

"I was sad for a moment," she said, "But that just means I get to be out here and stand up for what is right."

She and her family, some who flew all the way from South Dakota to watch Waln graduate, stood outside the stadium in protest.

"It's not just for her, we're fighting for all the ones that follow her," Bryan Waln, LaRissa's father said. "There are other Native American kids out here that would love to practice their religion on graduation day."

After little success changing the district's mind on their own, the Waln family reached out to the American Civil Liberties Union (ACLU). Their attorneys sent a letter to the district, citing Arizona religious freedom laws.

In part, the organization said:

"In accordance with her Native American faith, Ms. Waln - an enrolled member of the Sisseton-Wahpeton Sioux Tribe- seeks to wear beadwork and an eagle feather on her graduation cap. Under Arizona's Free Exercise of Religion Act (FERA), A.R.S 41-1493 et seq., the school may not deny Ms. Waln's request accommodation. She must be permitted to wear these religiously significant items on her graduation cap."

Click here to read the entire letter from the ACLU.

Waln will still be receiving her diploma, according to her family.