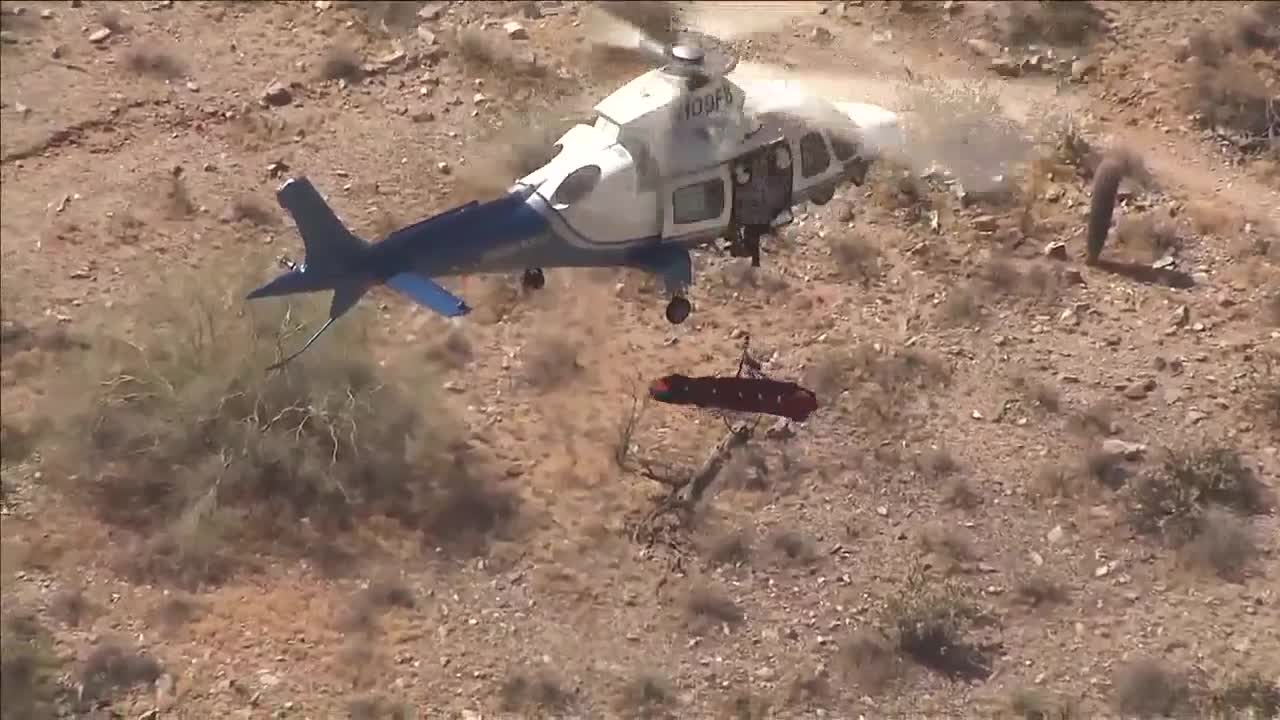 PHOENIX — The Phoenix Fire Department rescued an injured hiker from a mountain Tuesday — and she took quite a dramatic ride on a stretcher while being lifted into a helicopter.

The 74-year-old woman was rescued after she fell while hiking on Piestewa Peak in Phoenix on Tuesday.

In a press conference later Tuesday, fire officials say the woman was loaded into a Stokes basket after they found her on the mountain. But footage shows that as the basket was being lifted to the helicopter, it began spinning uncontrollably.

"We do mountain rescues all of the time, but this particular one gathered quite a bit of attention because during the rescue she was packaged on a hoist in a Stokes basket and she started to spin," Assistant Fire Chief Shelly Jamison said.

About a minute after the spinning began, it subsided and the basket was brought alongside the crew area of the helicopter, which landed at a parking lot at the base of Piestewa Peak. The woman was taken to a nearby hospital for evaluation.

"Sometimes, when we bring the helicopter up from the ground, [the basket] will start to spin," said Paul Apolinar, chief pilot of the police department's aviation unit. "We have a line attached to the basket that's supposed to prevent that. Today, it didn't."

Complicating the crew's efforts to stop the spin was the fact that the line intended to stop the basket from rotating broke at one point.

"They tried to stop some of the spin with the line that Paul was referring to, but that didn't work and it eventually broke," said Derek Geisel, who was piloting the helicopter during the rescue.

The spinning continued for about 40 seconds as the crew tried several times to raise and lower the basket.

"When they start to lower the load, [the basket] does actually start to stop," Geisel said. "And then we slowly brought it back up, it gets into the same downwash from the aircraft and it started to spin again."

"Once we got the forward flight, the spin got to the point where they were safely able to bring the patient up to the aircraft," Geisel said.

About a minute after the spinning began, it subsided and the basket was brought alongside the crew area of the helicopter, which landed at a parking lot at the base of Piestewa Peak. The woman was taken to a nearby hospital for evaluation.

Firefighters say the woman was nauseous and dizzy after the rescue, but is in stable condition. She was not experiencing any other symptoms related to the spin, firefighters said. The fall caused the woman to suffer injuries to her face and head.

"[The potential for the basket to spin] is something that's a known phenomenon in the hoist rescue industry," Apolinar, the chief pilot, said. "In the last six years, we've used a hoist 210 times on mountain rescues. In that time, we know of [a similar situation] happening twice."

Watch the Phoenix Fire Department's press conference in the video below.