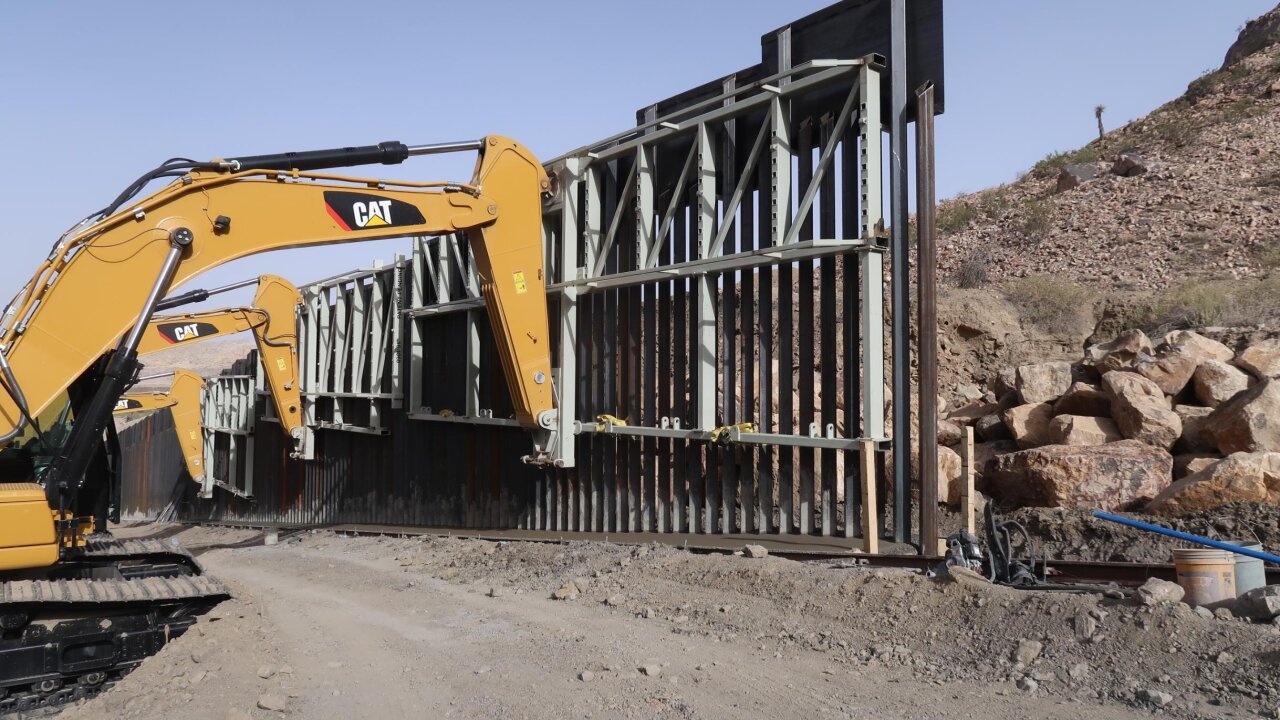 A federal agency has forced open a gate in the privately funded wall near the US-Mexico border, saying the group that built it didn't follow proper permitting procedures.

The US section of the International Boundary and Water Commission says the gate was blocking a government-owned levee road, and that the group known as We Build the Wall constructed the gate on federal land without authority.

"It's not the border wall that we have a problem with," spokeswoman Lori Kuczmanski said. "The problem is the gate is on federal property. You just can't come in and build a gate on somebody's property without asking -- especially not giving them the keys and walking away from it. It's not right."

Representatives of the commission locked the gate open Monday afternoon, she said.

"After repeated requests to unlock and open the private gate, the United States Section of the International Boundary and Water Commission (USIBWC), accompanied by two uniformed law enforcement officers from the Dona Ana County Sheriff's Office, removed the private lock, opened the gate, and locked the gate open pending further discussions with We Build the Wall," the commission's US section said in a statement.

We Build the Wall founder Brian Kolfage slammed the commission in a series of social media posts Tuesday, accusing the federal agency of overreaching its authority and calling for its presidentially appointed commissioner to resign. In a statement to CNN, Kolfage said his group's attorneys are working on the matter -- comparing the situation to a permitting dispute with city officials in Sunland Park, New Mexico that was resolved after city officials issued a "cease and desist" notice temporarily blocking construction.

"Just like we saw with the City of Sunland Park, we will prevail," Kolfage said. "Our lawyers have been working on this for weeks and we will regain control over the gate shortly."

The dispute pits We Build the Wall, an organization that raised more than $20 million for border wall construction in a GoFundMe campaign , against the US section of the International Boundary and Water Commission, a federal agency charged with applying boundary and water treaties between the US and Mexico.

The commission -- which has US and Mexican counterparts -- operates flood control levees, wastewater treatment plants and boundary monuments at numerous locations along the US-Mexico border, including the American Dam located near We Build the Wall's barrier. Its US section is headquartered in El Paso, Texas.

"The USIBWC is concerned about the safety and security of our employees and the infrastructure at the American Dam, which is next to the privately-constructed gate," the commission's US section said in a statement posted on its website. "Despite USIBWC requests to locate the gate further from American Dam, the private gate was constructed in a way that may channel undocumented immigrants into the American Dam area. When the proper documentation is received for the permit, USIBWC will continue to process the permit application."

The American Civil Liberties Union of New Mexico had called for the commission to intervene last week , criticizing the fence for blocking access to Monument One, a historical marker at the US-Mexico border.

Kolfage told CNN a private property owner also owns part of the road leading to the monument and has the right to limit access.

"Access to the monument can ultimately be restricted indefinitely by the private property landowner if he deems it's necessary since he owns the road further up the way," he said.

But Kuczmanski, the commission spokeswoman, said concerns about access to the monument were also being considered as part of the permit application.

Permits can take up to six months to process, she said.

"They're lacking paperwork and information that we need to make a final determination," she said, including a hydrology study and a drainage report.

It's not typical for a project to move forward without a permit, she said.

"Usually everybody is very cooperative and they well in advance tell us their intent, and they give us all their plans, and all their specifications, and all their documents," she said. "And we say 'yea' or 'nay,' and we proceed from there."