A child took a doll from a store without paying. A Phoenix police officer pulled out his gun 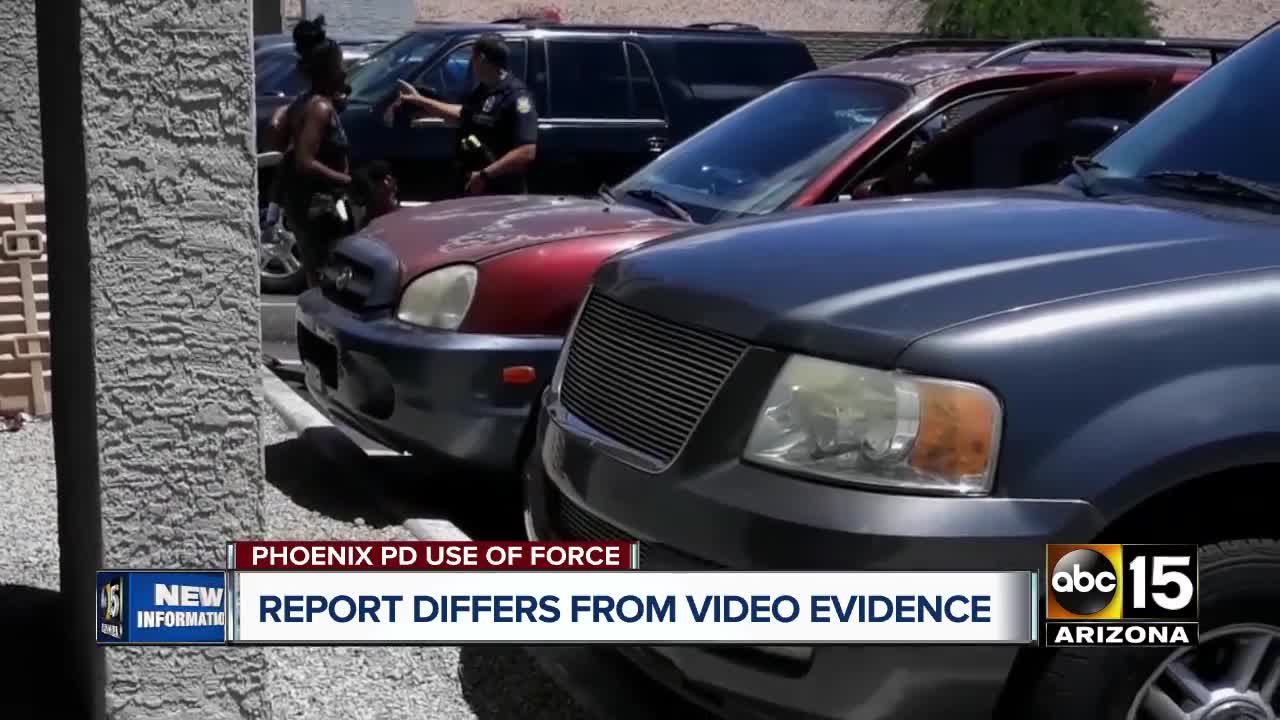 A $10 million legal claim was filed against the City of Phoenix that says police officers committed civil rights violations by pointing guns and profanely yelling commands at the father and pregnant mother of two young daughters because one of the children shoplifted a doll at a dollar store. 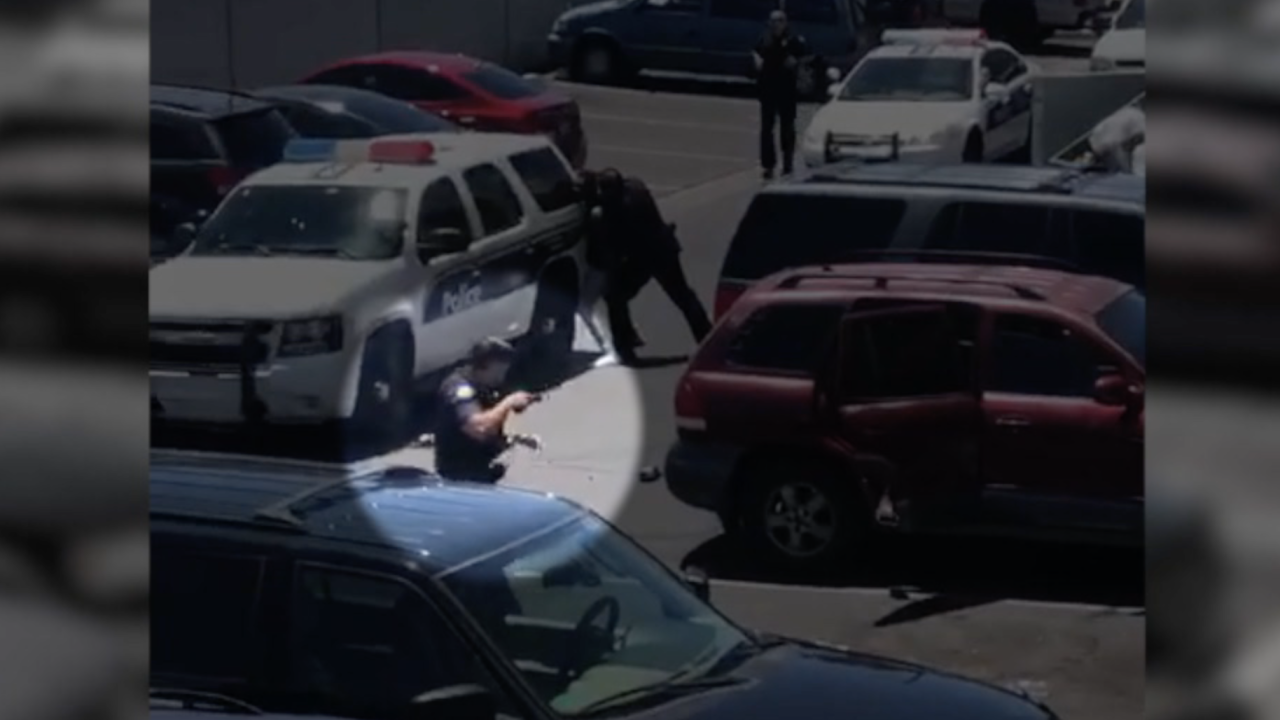 PHOENIX — A $10 million legal claim was filed against the City of Phoenix that says police officers committed civil rights violations by pointing guns and profanely yelling commands at the father and pregnant mother of two young daughters because one of the children took a doll at a dollar store without paying for it.

KNXV obtained a copy of the full police report and discovered major omissions and differences between the officer's account and the witness videos. Click here to read the redacted incident report.

For starters, Officer Christopher Meyer, who wrote the report and is the man seen cursing at both parents, never mentions that a fellow officer held the mother and two young daughters at gunpoint.

He only writes, "Iesha (Harper) was then removed from the vehicle."

He also does not detail how he kicked the leg of the handcuffed father, Dravon Ames, only stating, "(Ames) began to tense his arms and turn back towards me. I made him spread his feet."

In the video, there is no indication that Ames is resisting or ignoring commands.

At one point in the witness video, Meyer can be heard yelling "I'm gonna f***ing put a cap right in your f***ing head."

The report does mention how the officer instructed the mother, Iesha Harper, to "set the child down in the shaded area."

In the video, Harper emotionally tells the officer that the baby could not walk and the ground was too hot to set her down.

In the report, the officer writes she "refused to put the child down." And said, "she became loud, verbally abusive, and refused our commands."

Phoenix Police Department Chief Jeri Williams said in a video released Friday afternoon that she began an internal investigation as soon as she was made aware of the video and that it's ongoing.

"I, like you, am disturbed by the language and the actions of our officer. I assure you that this incident is not representative of the majority of Phoenix police officers who serve this city," Williams said.

The notice of claim — a precursor to a lawsuit — filed Wednesday said Ames was injured by police who erroneously claimed he wasn't complying with their commands after Ames exited the vehicle that the family was traveling in.

An officer is accused of throwing Ames against a vehicle, kicking his leg so hard that Ames collapsed and punching him for no reason. The claim said one of the officers profanely told Ames in front of his children that he was going to shoot him in the face.

"No threat, no resistance," said Tom Horne, an attorney representing the family. "It was completely unjustified."

The accounts of the encounter provided by the family and police are conflicting.

While the parents' attorney said the child and father were injured in the encounter, police said no injuries were reported to them.

Police also said there were other stolen items in the vehicle during the encounter besides the doll.

A video of the encounter has been circulated on social media. A bystander captured the footage outside an apartment complex after the family had left a Family Dollar store location where the doll was taken.

The notice of claim said Harper, who is five months pregnant, was handcuffed after she gave the child to a bystander and thrown face-first into a police vehicle.

The officer who pulled on the child's arm had profanely told Harper that he could have shot her in front of her children, according to the claim.

Police say an officer was at the store on an unrelated shoplifting call when store employees told him about another shoplifting complaint and directed him toward a vehicle that was leaving the parking lot as the officer approached. The officer had told Ames, who was driving the car, to stop, but he didn't, police said.

Another woman who was inside the vehicle was dropped off at another location before the family reached the apartment complex. She had three outstanding misdemeanor warrants and was booked, police said.

Police said Harper, the mother of the two children, remained in the vehicle and later explained that she believed one of her daughters had stolen the doll because they didn't have any money.

Both parents were handcuffed and detained inside police vehicles, but they were eventually released, Horne said.

No one was charged with shoplifting because the property was returned, and store employees didn't want the case prosecuted, police said. But Ames was given a traffic citation for driving on a suspended license.

In the police report, officers allege the four-year-old girl’s aunt was also shoplifting. She reportedly dropped stuff at the door when she noticed the officer.

The little girl and woman both got into the vehicle with the parents seen on the video.

According to their statements to police, an officer yelled for the car to stop, and the parents heard the command, but Ames drove off anyway. He also allegedly admitted to throwing a pair of “stolen underwear” out the window.

The aunt got out of the vehicle before the viral video and was arrested for three outstanding misdemeanors.

Horne said the parents didn't know their daughter had taken the doll until they were in the vehicle leaving the store.

Horne said the family was taken aback by officers approaching them at the apartment complex because police didn't turn on their lights or sirens that would have indicated they should stop.

This story was originally published by Zach Crenshaw on KNXV .