50 million under threat of severe weather as hail, rain and tornadoes move East 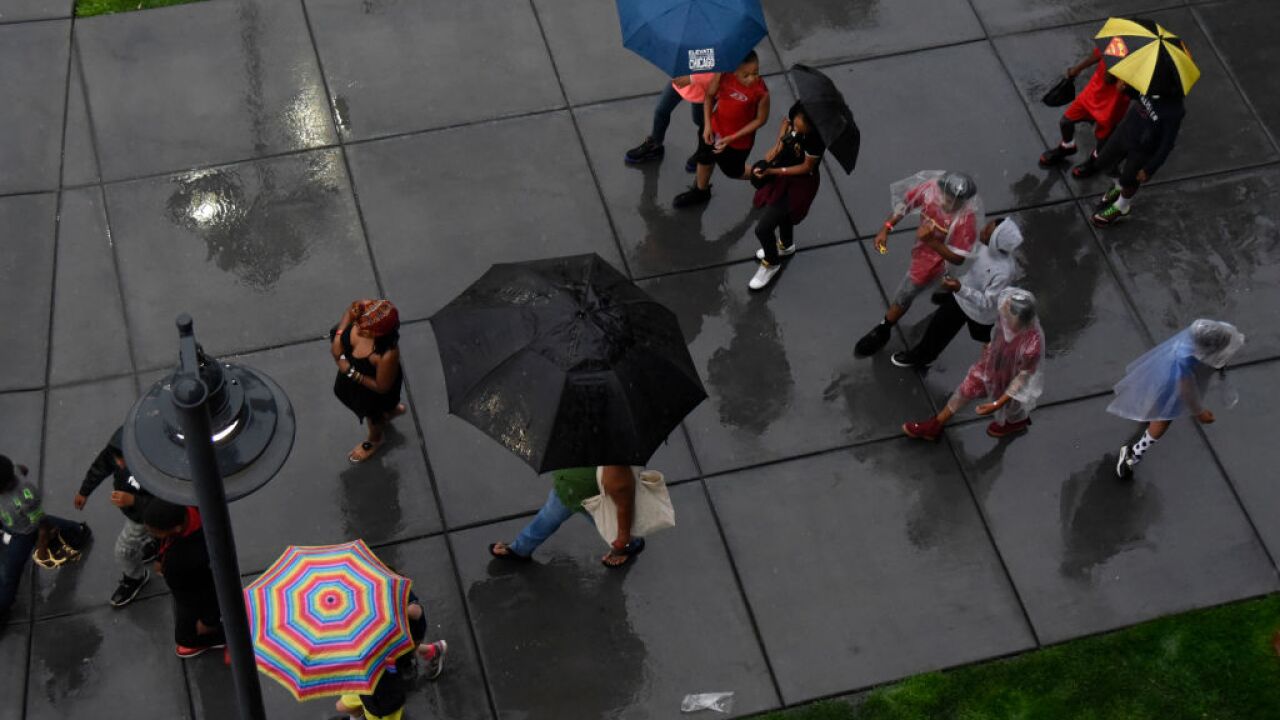 More than 50 million people are under threat of hail, heavy rain, strong winds and isolated tornadoes Sunday as several storms move east, according to the National Weather Center.

The storms that stretched from Texas to southern Minnesota are predicted to move into the Great Lakes/Ohio Valley area, Mid-Atlantic and central to northern Appalachians Sunday.

While the risk for severe storms appears to be low, it extends over a large population.

Those in the Chicago area are preparing for scattered, fast-moving thunderstorms that can bring damaging winds and hail, according to the National Weather Service.

Showers began in Milwaukee Saturday night, the NWS said, but the biggest downpour is expected on Sunday.

And if those storms are anything like Saturday's, they could bring destruction.

At least 34 tornadoes were reported since Friday morning, including in Kansas, Nebraska and Texas. Saturday brought another 10 tornadoes along with 148 wind reports and 33 hail reports.

A tornado overturned a semi-truck on a Mineola, Kansas highway with a driver inside, according to CNN affiliate WJTV.

This is peak tornado season, CNN meteorologist Derek Van Dam said, "with an average of 268 tornadoes countrywide during the month of May."

Threat of flooding will be high throughout the week, with rainfall totals ranging from one to five inches, according to Van Dam.

"The heavy rain will impact areas that have received significant amounts of rain within the past several weeks," Van Dam said. "The ground remains very saturated and may elevate the flood threat."

Missouri is expected to see heavy rain in recently saturated soils and may have increased flood potential, according to the NWS.

The Mississippi River has been above flood stage for 133 straight days at Natchez, 90 days and Vicksburg and 89 at Greenville, said the NWS, breaking record for some of the longest-lasting floods in years.

In early May, the Mississippi broke its July 9, 1993 record, after heavy rainfall triggered flooding from Minnesota to the Gulf of Mexico, CNN affiliate WQAD reported. The flood gauge in 1993 at Rock Island, Illinois, topped out at 22.63 feet. Its level this month reached 22.64 feet, WQAD said.

Monday will see the greatest risk for severe weather, Van Dam said, as a cold front moves from the West into the Plains.

An enhanced risk for severe weather (level three out of five) extends across southern Kansas, Oklahoma and central Texas.

But the Panhandle of Texas and Central Oklahoma will see a moderate risk of four out of five.

"Effectively, Tornado Alley will come alive once again early next week. In fact, for the SPC to have a moderate risk out this far in advance of a potential severe weather outbreak really indicates their level of confidence in a significant event," Van Dam said.