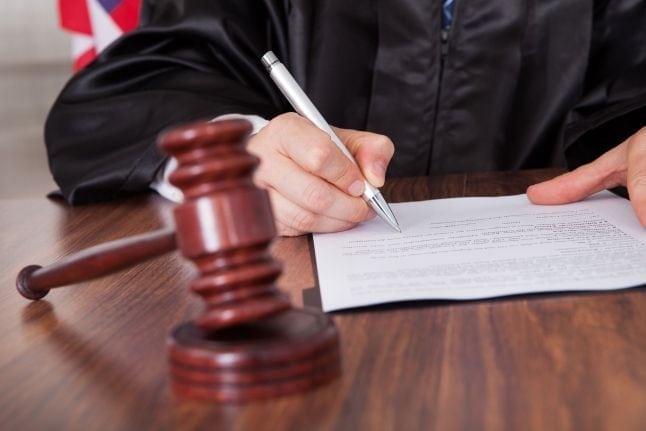 You’ve heard attorneys on TV proclaiming their ability to earn million-dollar settlements for their clients. Undoubtedly many of monetary awards are warranted, the result of negligence on the part of the defendant. But some may be feeding hopes that litigation leads to easy payouts.

You may not think about how lawsuit abuse can impact your daily life, but excessive lawsuits touch many areas of your world – from the pricing of products to the cost of healthcare. Consider this:

1. The costs of excessive awards come out of your pocket.

Everywhere you go and everything you buy has embedded in it the costs of excessive litigation that make the American legal system twice as expensive per capita as the next costliest in the world. When fast food chains face multi-million dollar verdicts against them for selling coffee deemed too hot, those costs have to be recouped in the food you purchase.

2. You pay for it at the doctor’s office.

Healthcare costs in this country is higher than many other nations and lawsuit abuse plays a role in that price tag. Plus, the insurance that covers those lawsuits also burdens our healthcare system, as well as unnecessary diagnostic tests ordered to protect physicians against legal claims. In a survey by Johns Hopkins University School of Medicine, doctors cited fear of malpractice as the main reason for overtreatment.

3. You spend 27 times more on tort lawsuits than on Homeland Security.

America’s tort system costs $865 billion, 13 times what the federal government spends on education, 30 times what the National Institutes of Health spends to cure disease and 27 times more than the Department of Homeland Security’s budget. It costs nearly $10,000 for family of four annually in “costs and foregone benefits,” according to a study by the Pacific Research Institute.

4. Frivolous lawsuits are messing with Texas.

Like everything else, lawsuit abuse is bigger in Texas. In a 2017 ranking of the lawsuit systems in the 50 states, the Lone Star State clocked in as 11th worst. In 2017, the Institute for Legal Reform ranked Jefferson County as the third “least fair and reasonable litigation environment” in the nation.

5. Liability lawsuits could cost your job.

Consider the case of the gas can manufacturer in a small town in Oklahoma that employed people in town. Lawyers for people who had misused the cans filed a multi-million dollar class action case against the company and put it out of business. The town lost a key employer, more than 100 workers lost pay and benefits.

Bay Area Citizens Against Lawsuit Abuse (BACALA) is a Corpus Christi-based non-profit legal and consumer watchdog organization dedicated to making the public better aware of the cost and consequences of lawsuit abuse.

BACALA welcomes actor/economist/political commentator Ben Stein to The Ortiz Center on August 15 as keynote speaker at its 15th annual luncheon.

For tickets or to find out more, visit BACALA.net. 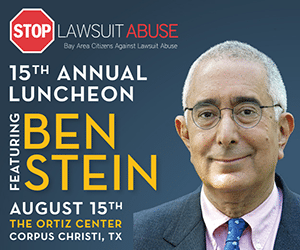 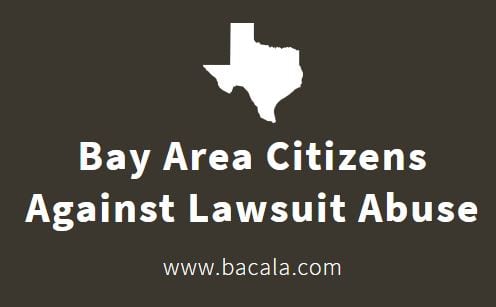 Bay Area Citizens Against Lawsuit Abuse (BACALA) is a not-for-profit, nonpartisan grassroots movement of concerned citizens and businesses who are fighting against lawsuit abuse in the Corpus Christi area. BACALA serves as a watchdog to challenge the abuse of our civil justice system, and engages the public and the media to deliver the message that lawsuit abuse is alive and well in Texas — and that all Texans are paying the price.

KZTV Action 10 News offers useful, valuable information from select sponsors on these pages. This content is not produced or endorsed by KZTV Action 10 News. To learn more about being a Sponsored Content provider on this site, contact our digital sales specialists.