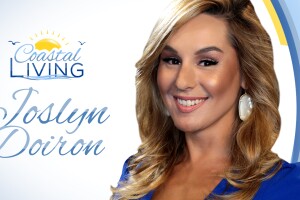 Joslyn Doiron was born and raised in Corpus Christi, Texas. She is a graduate of Texas A&M University where she earned her Bachelor’s degree in Communication studies. She grew up around the television business and wanted to learn every fragment of the industry with a dream of becoming an on-air talent.

Joslyn started her television career in 2017 as a production assistant at KENS-5, the CBS affiliate in San Antonio. After a year of learning production as well as other capacities of the television business, she decided to move back to her hometown to pursue news reporting for KZTV. A few months later, her position transitioned into a “hybrid” role by undertaking sales and on-air talent for her segment “Coastal Bend Reporter.”

She now feels very privileged to balance her career on Coastal Living and with media sales, as she always enjoys performing multiple tasks and being multi-talented.

When she’s not working, you can catch Joslyn at the beach, or on the water doing what she enjoys – catching fish! Other than her career, her faith, love for fitness, and outdoor activities are the top three things that she is passionate about. And of course, spending time with all her loved ones.

Joslyn believes that anything is possible if you believe in yourself and hopes to inspire women around the Coastal Bend to recognize their worth and empower women of strength.